Today, again the Uganda Police Force has blocked another Concert, which the Member of Parliament Robert Kyagulanyi aka Bobi Wine from doing on the 2nd December 2018 in Gulu. This is not the first time he has been blocked. It is very common for the Police to block the opposition and their leaders.

This is just a long run of impunity… it is tradition and not surprised, especially considering the Trial Date for the Treason Charge and the Election Violence case on the 3rd December 2018 at the Gulu Magistrate Court tomorrow. Even if that wouldn’t happen, the Police would block it as it is troubling to see a figure of the stature of Bobi Wine come to town. They surely used the Public Order Management Act and to secure the public, but this was within one venue that was notified in the 4th November 2018 and suddenly closed off. The day that the concert was supposed to happen.

“So yet again, our concert in Gulu has been blocked by the police! We wrote to them three weeks ago informing them of the show and requested them for security. We compiled with all the laws and invested a lot of resources preparing for the show. Today, the police showed up at the venue cutting all banners and other advertising material without giving any explanation. Police patrol vehicles have been moving around Gulu town, removing all the banners and posters! The promoters have been trying to call all responsible officers, and all they say is that they have ‘orders from above’ not to let me perform. Dear brothers and sisters in Gulu, I was looking forward to having a good time with you tonight. Very soon it will be possible. I know that God willing, one day, we shall free ourselves from this mess and be able to enjoy ourselves in the new Uganda. In the meantime, we shall stop at nothing in challenging this kind of injustice and gross violation of rights. We shall communicate to the nation about our next step. Tomorrow we shall be at Gulu High Court at 9:00am, concerning the tramped up charges from the Arua incident” (Bobi Wine, 02.12.2018).

This side of story is sadly to common. If your someone who the authorities and the government sees as a threat. You will be under fire, struggle to do your business and operate as a political party or entity. The ones who are the opposition will be in trouble. As shown with plenty within the Democratic Party, Forum for Democratic Change and Independents. Right now, Bobi Wine is an arch-nemesis on the line of Dr. Kizza Besigye. The only thing missing right now is that Bobi Wine are getting house-arrested like him.

We are seeing, what we have seen before. This is currently the attitude of the police and the NRM regime. Who are attacking their rights to assemble and even stopping their livelihood. When concerning Bobi Wine, it is stopping his musical career and his concerts. He was able to pull of the album launch. Only when he fixed it on his own plot on One Love Beach. Before that, the authorities was blocking him and made change dates.

For Bobi Wine he is starting to feel it and that is showing what troubles that is ahead. They will not make it easy for him. The authorities will clearly make life hard for him. Bobi Wine are now one of the targets of the state. His People Power message is scaring the government and the President. It hits a nerve at a tired public of the 32 years and counting. They are not the automatically loyal subjects of the President or his Movement. Even if that is what the President wishes. Peace.

The letter notifying the authorities: 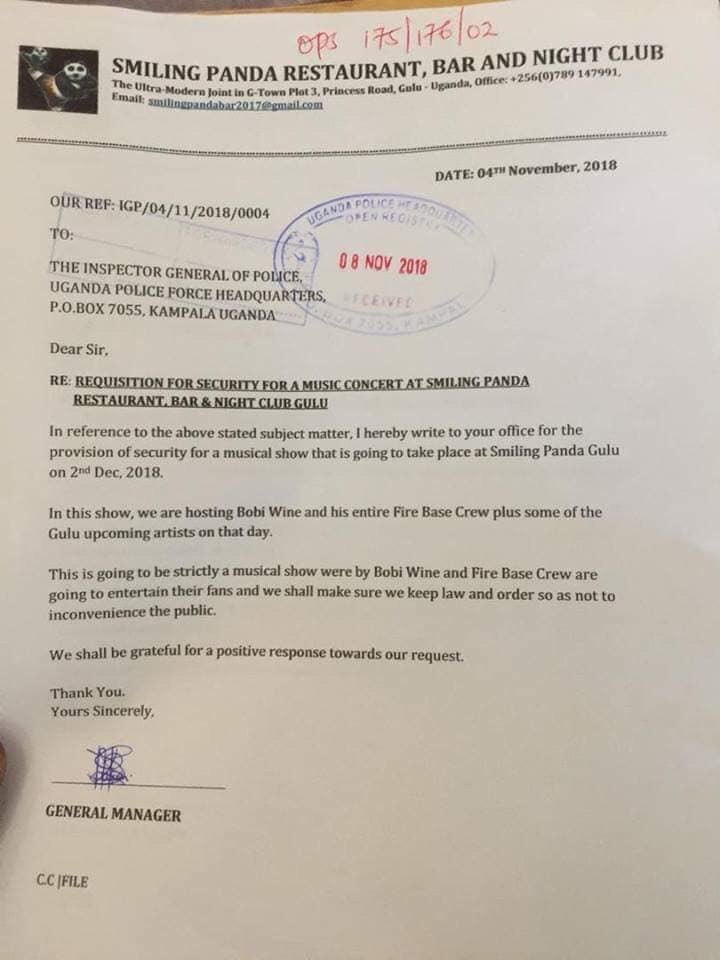 What a day, What a Night, What a Show! THANK YOU to the thousands of friends, supporters and fans who came down to One Love Beach Busabala last night for the #KyarengaConcert. Abaana ba Uganda mwena, I cannot thank you enough for the massive show of support and solidarity. What a night!!! Not only did you show up in record numbers, the vibe was so good. You lit the fire and kept it burning. Thank you for dancing to the songs of freedom. I enjoyed every bit of the night, and it was evident you guys had fun too. I was captivated by your sense of purpose, resilience and determination for a better Uganda. Your faces were all beaming with hope and aspiration even as we danced and sang. I want to send a special thank you to my fellow artistes who made the show even more colourful. Mwe musinga baana ba Taata. Lazima if we all do our part, and God being on our side, olutalo nga luwedde tuliyambala engule mu Uganda empya! 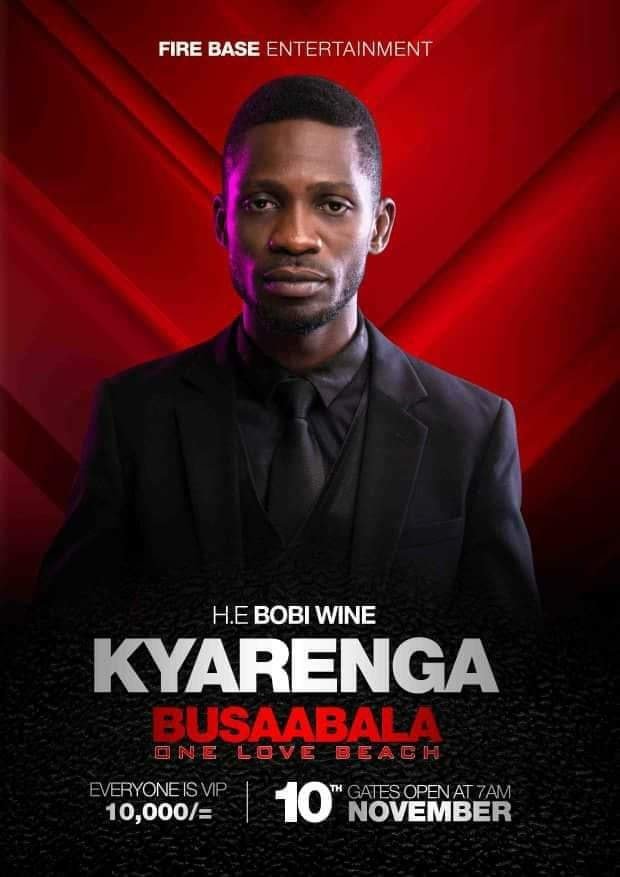 President Yoweri Kaguta Museveni are getting more and more touchy with age. He has less and less flex too. That is why the Ministry of Foreign Affairs in a Memo has said that the Kenyan MP Babu Owino is Person Non Grata in the Republic of Uganda.

In the Law Dictionary that means: “Latin for a person not welcome; an undesirable, unwelcome or unwanted person”.

So we clearly see the intent of the Republic, as they want to ensure the concert of Bobi Wine tomorrow doesn’t have a high-profiled foreign guests. Expect more nonsense. As tomorrows concert will not go down without any drama. There has been plenty already and expect more, because Museveni is a whiny little cadre, who has to use force and bullets. He cannot establish a pattern of trust nor of betterment of the Republic.

That is why Owino isn’t allowed into Uganda for the purpose of attending the Concert and Album Launch. Because that would enforce and also show strength to the cause of Bobi Wine. That is something Museveni cannot see, Museveni can have over Deputy President William Ruto. But not let the minions grow stronger. That is not acceptable. They are supposed to shielded and follow his command. Not create their own stage and their livelihoods. That is not how the Republic works under Museveni. No, no and no.

Owino is a lost cause here, he could have been a beneficiary and a foreign supporter. Instead he will not be able to attend and surely will be left at the airport or at the border-crossing. Where he will be told and direct back to Kenya. Because, the patrols and the Security Forces will follow the command from above high.

So, if someone is afraid of Robert Kyagulanyi aka Bobi Wine. It is clearly the state, as they are making all the ones in association with person non grata. Just like they didn’t allow his foreign attorney to represent him after the torturing and arrests post Arua By-Election. It all fits a pattern and it is not beautiful, but a masterpiece of oppression. Peace. 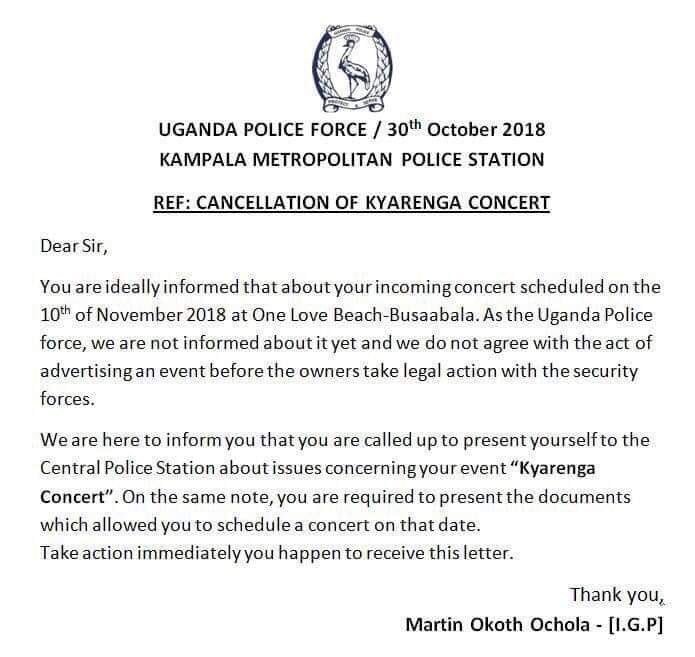