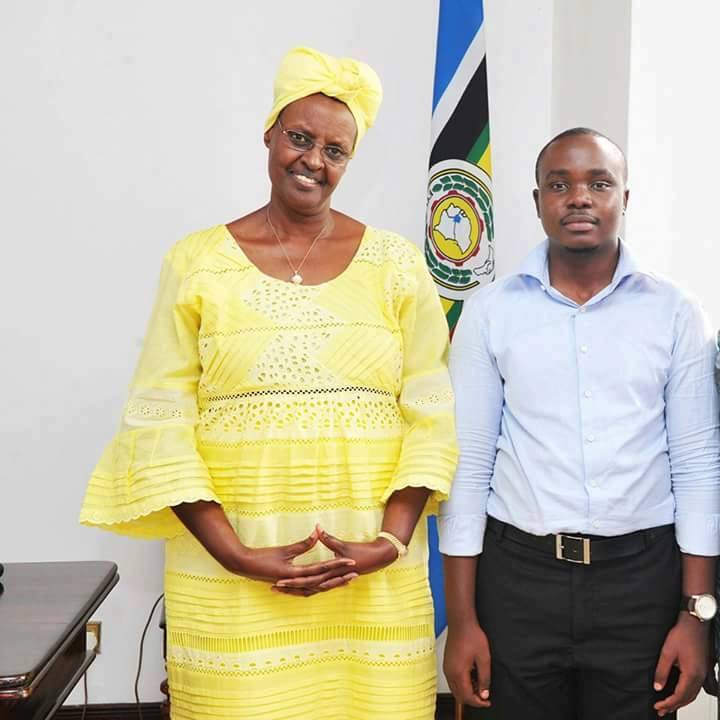 Yesterday there was a group demonstrating in front of the European Union Embassy and the U.S. Mission in Kampala as a reaction to the involvement in the elections. As the NRM-Regime has already told the Foreign Missions during Pre-Election time to not be involved in local politics.

Malik Kiberu was the leader of the Youth Action Against Imperialism (YAAI) Kiberu is a law student at UCU in Mukono under a State House sponsorship. President Museveni has himself pledged 53bn to the group so they could do their work. Another key member of the group is Burora Anderson who is their Chairman.

They are after the ordeal in front of the embassies taken to Kabalagala Police Station. Though the notion is that they could speak their peace and let go, as they are a part of the ruling party and there not seen as criminals; as they have done this on NRM payroll and proves to what extent NRM-Regime goes to make mockery of intelligent people. Yet another proof of how they pay unemployed youth to stage a demonstration and storm embassies in the capital. It is just a sad sight. An you know there something strange behind it all when only Bukedde writes about it and express the matter. The Bukedde is part of the State Media and the Vision group. So that makes it even more suspect with the reports of how they are funded and the timing of the demonstration.

“Group of 10 “anti-imperialism” youths arrested after they attempted to storm the US embassy. The group stormed US embassy demanding that America ceases to interfere in Uganda‘s affairs or else govt should expel all Americans” (NBS TV Uganda, 03.03.2016).

The US Embassy answered this to question about the “Attack” from a worried person on Facebook:

The whole story is suspect and sounds all to me like a fraud. I still press it though as the NRM-Regime have done lot’s of suspect things before and bend the laws to their advantage when they can. That they would create a fake organization to put pressure on the foreign mission would not be surprising thinking about that the U.S. Mission and EU Mission has asked to get the results and follow up on the announcement after the elections. That must hurt the NRM and President Museveni that they don’t automatically acknowledge and congratulate him. Peace.

If you had forgotten Ofowo Oponod wish during the Pre-Election Period:

(the Internet does not forget).