Archive for the tag “Brutalities”

Remmy Bahati Speaks On Her Ordeal With The Police (Youtube-Clip)

“Remmy Bahati, the second NBS journalist who was arrested while reporting live outside Kizza Besigye’s residence, spoke to the Morning Breeze crew on her experience with the police after her arrest. A traumatic experience but a highlight in her career” (NBS TV Uganda, 02.03.2016).

It is hard to listen to her and hear what she went through in the car. Remmy Bahati and what they did in the car was sad to hear. The issue is also about Press Freedom and that Andrew Felix Kaweesi telling at Kasangati Police Station to not tell the Dr. Kizza Besigye or following what happens around his home there. That says how much they are trying to stop media and the press to be around Dr. Kizza Besigye. She had an appointment to get there, but she was not allowed in. She questioned that Andrew Mwenda could enter yesterday without an appoinment, but not her! The irony! It was DPC Kasangati who ordered the arrest of her yesterday, DPC James Kawalya!

I feel sorry about Remmy Bahati and I am glad she is telling the story of how the Police have harassed her and without charges. This here will always torment the regime that are now. Because the issue of not caring about the journalists or about the justice. Here is the example for inciting fear and unjustifying their actions towards her. This here is just sad that the Government of Uganda and that the Police of Uganda did. Peace. 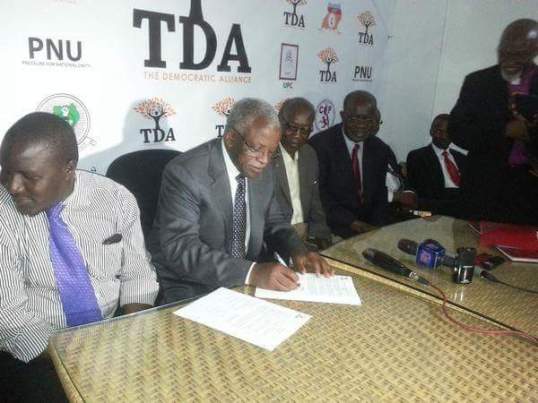 Today isn’t a normal day. Today is a day where it’s reviled after hazardous consulting meetings in Soroti and Jinja that a certain high caliber politician has switched sides. Amama Mbabazi is not any longer a Presidential Candidate in the NRM, but is becoming a part of the of opposition coalition The Democratic Alliance (TDA).

A man who had a special thing and now has gone from being the guy who has a vital part of the chambers in parliament, also and secretary of the party of the NRM party for years has gone into the lion’s den together with the opposition yesterday.

It proves the powerful idea behind FDC, JEEMA, DP, and UPC, so they are now accepting the brother into the camp when the internal parties has already picked their flag-bearers for the presidential election in 2016. He went from being a vital part of the NRM, a man Museveni trusted. Even if Mbabazi is famous for eating big slices of governmental deals and have even chartered high on corruption indexes, they are still letting him in the fold and umbrella of the TDA. This must be joyful reunion for Hon. Gilbert Bukenya who has trades silver coins from the CHOGM scandal in the past. Olara Otunnu knows the man well and has discussed matters concerning Mbabazi in length in the past. The same has Norbert Mao they all know him and how he has acted. As the public knows as well!

Well, so when the tides are turning and the opposition can prove greatness, while the NRM is losing ground. They still have the powerful army and police on their hand. We will sure see more teargas and venues in towns being under siege before the election in 2016. Since we’re still in the run-up! While we waiting we know that the ones that went independent earlier from NRM, might run back to fold to get feed and be underline of the main stem leadership protocol of the party. Though it seems that the fallout rate and big-men that has been around for ages is on the level of agony that Louis Van Gaal in Manchester United doing. Where certain former loved players has all left the club. Now the same is happening with the NRM. Though it is happens in other fashions and ways, but initially the same outcome. There consistency of harsh brutalities and the way people are getting out of the NRM, it doesn’t seem healthy.

You’re either forced out with the skin on your teeth or you’re getting flogged in the main streets of Any-Town in Uganda. Amama Mbabazi I wrote earlier this year that he was starting a walk through the desert. He finally has found shade in the midst of darkness. The campaign he will run now will not be affiliated with the party he has been involved in for so long. This has been the end of it.  He lost when he questioned the power of the man on the top, that man would not accept somebody questioning the fact and realities of one sole candidate before preliminary voting inside the party. H.E. Yoweri Kaguta Museveni would not have JPAM or Amama Mbabazi questioning his powers and reach, nor anybody else for that matter. That is why when other people are campaigning in the lands. The government bodies for securing peace will make fuzz and be violent against the crowds. We have seen all year from the campaigning of Dr. Kizza Besigye and recent attacks in eastern Uganda in Soroti and Jinja.

It shows that there are no nobility amongst the cadres of NRM especially when you look at the way they leave their people behind. There so many reasons for the end game of certain long serving politicians seems like their left to rot after being loyal subjects and done all in favor of the mighty president.

So yesterday’s signing of TDA protocol proves a vital point and strength of this unity. Also of the fallout of Amama Mbabazi was inevitable after the clippings of his wings in not so distant past. Which lead to his childhood friend Dr. Ruhakana Rugunda taking over his position as the PM. That was for the big-man on top fearing the issue of aspirations that Amama might have of one day wishing to succeed the fellow leader on the throne. Something that we all know isn’t acceptable by the sole candidate in 1996, 2001, 2006, 2011 and to come in 2016.

We will see what outcome and reach this symbolic turn of events will have. Though this signing of Protocol from Amama Mbabazi should by just the signature on the paper, strengthen the movements of the opposition since they have yet another former weapon-brother of the mighty Museveni.

This also leaves Mbabazi after months into wilderness and without shade, finally getting a gracefully sit-down with fellow peers. Who has for years and decades been under the scrutiny of regime that Mbabazi has partly put into effect especially with Public Order Management Act, which will always hunt him! Like a now evil ghost that was built to suppress anybody who wasn’t directly coordinating their movement with the government of Uganda, this is initially the cronies of the NRM.

So there we have it! TDA with Dr. Kizza Besigye, Olara Otunnu, Norbert Mao, Asuman Basalirwa and so on has now Amama Mbabazi in their ranks. They can soon be sitting together in the lion’s den and plotting their next move.

We can all wonder what this will say about the issues and coming elections while the parties themselves has picked flagbearers, who will be the main candidate of the alliance and the TDA. Will be race to follow and also see how the come-up to the 2016 in the end will be looking because if it follows the start, it will be violent and dangerous to be at other rallies then ones run by Museveni and his cronies. The rest will have to wear gas-masks and heavy gear to not taste rubber bullets of the police force and the rulings from the local DPC. Peace.