Archive for the tag “BoC”

President Duterte: If you let the AFP run the BOC, maybe while you at it; Let them run the PPA, CAAP and PHILPOST too! 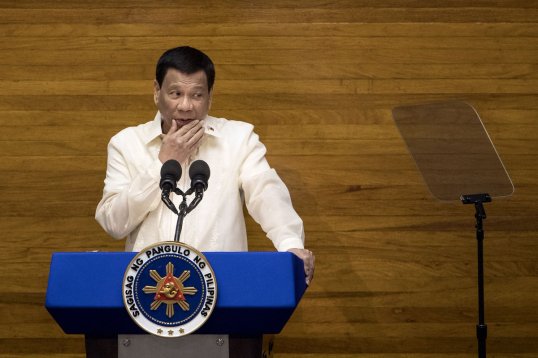 Today, Philippines President Rodrigo Duterte announced that the Armed Forces of the Philippines (AFP) will replace and take charge of the Bureau of Customs. That is an added extension of the army and secondly, also of the use of soldiers. Then, they are not there anymore just to add safety of the sovereign borders and create peace in the land. But scan and secure all passengers and goods passing into the Republic.

Isn’t that a bit extensive for the armed forces? Meaning, the army needs brigades for all Border Posts and every where the Bureau of Customs (BOC) is operating. They have to add much more trained man-power and this is excessive use of the army. The AFP should clearly focus on other tasks, than check what sort of goods that is coming into the Philippines. This is a foolish move by the President.

““They will be replaced, all of them, by military men. It will be a takeover of the Armed Forces in the matter of operating, in the meantime, while we are sorting out how to effectively meet the challenges of corruption in this country,” Duterte said” (…) “”I want to put on notice everybody in the Bureau of Customs, they are all in floating status. Maybe start again working, but I said, they are all floating status,” he said in a speech during the thanksgiving dinner of former Foreign Affairs Secretary Alan Peter Cayetano in Davao City. “The Customs intelligence unit, they are to report to Malacañang, all of them. I’m ordering everybody to report to my office. Maybe I’ll issue the memorandum. They will hold office there at the Malacañang Gymnasium. Lahat,” Duterte added” (ABS-CBN News – ‘Duterte temporarily puts Bureau of Customs under military control’ 29.10.2018, link: https://news.abs-cbn.com/business/10/29/18/duterte-temporarily-puts-bureau-of-customs-under-military-control).

If he takes away the trained personnel for a soldier, he is clearly forgetting the task at hand and the long time it takes to know the trademarks of counterfeit goods and also drug-smuggling, which both is sophisticated industries. Where the men and cartels behind it uses all methods to pass through the check-points, the border-points and get through the Customs search. This is well-known and the ones working has to be vigilant and see for the signs to find the culprits bringing the illegal goods across the borders.

Soldiers are trained for a whole different operations and operative in a different way, than the Customs Units. That is evident and doesn’t need rocket-science to understand. It is vile attempt of control and this will not eradicate the imports of illegal substances and drugs. As they will finds way to trick these soldiers and methods, which are to smart for these soldiers whose used in shooting guns. Not questioning paperwork, licenses and if a kids-toys or lipsticks are filled with cocaine.

Secondly, if the President really does this to the BOC. Should we anticipate the soldiers also to takeover the Philippines Ports Authority (PPA). Since they already are running the Customs, wouldn’t it be more significant and more likely take all drug-dealers if they have the whole ports under siege in the Republic? To ensure the imports to the airports, shouldn’t soldiers also run the The Civil Aviation Authority of the Philippines (CAAP)? While they are at it, shouldn’t they also have soldiers running the Philippine Postal Corporation (PHILPOST)?

Because, by that time, they have control of the Customs, the Ports, the Airports and the Post by soldiers, shouldn’t that stop it all from coming to the shores. As you cannot trust civil servants or experts to do their jobs. All are corruptible and the only ones that cease to be following codes are the soldiers. I know I am taking it far, but isn’t it a bit far-fetched and worrying if you needs soldiers who is trained to kill, to check if it is Menthos or a spliff passing by at the Customs at Manila Ninoy Aquino Airport?