If you would think that the National Resistance Movement would leave the new Municipalities MPs and other elected officials to the Opposition parties. You know it would be a lie. That the NRM are supposed to celebrate, but as the ruling party, they still lost Apac Municipality to the Uganda People’s Congress and lost Bugiri Municipality to the Justice Forum.

What is striking is that in Apac the NRM lost to someone who has faked his own death, Patrick Ochan, is a unique character, who forged money from Centenary Bank and declared his own death in 2006. Still, that was not enough for Obote’s son or the NRM to beat him in 2018. That says a lot of the state of NRM and also the opposition.

That Asuman Basalirwa won the Bugiri Municipality was a big deal and the NRM used all the big-guns there to sway the public. While Robert Kyagulanyi used his star-power to boost his campaign. The Forum for Democratic Change tried, but didn’t succeed either. However, it ended in the hands of the JEEMA Party and their only MP in the Parliament.

The rest of the districts like Nebbi, Kotido, Sheema, Ibanda and Njeru went all to the NRM. Sheema was also heavily contested and worrying signs yesterday, when the reports of late evening voting past fixed time for it. That means, the NRM could have countered the methods and secured it by late voting, which is fixing the score in their favor. As the trailing FDC in Sheema, was very close and the reality shouldn’t shock you.

This is like giving the opposition some posts, just so they exists, but still making sure the NRM have the majority. Just like they always do. There is always rigging and bribery, even voting tourism, where the NRM are ferrying people to vote in their favor. That could have occurred yesterday, but because of lack of observers and also intimidation from the army and police.

The Opposition should not shake their heads. They are working against the machine, they are not in a level playing field. The President are doing what he can wipe them out of the map. Therefore, only the dreamers would expect the FDC to get big. NRM won most, but is what they have done in most by-elections since 2016. It is only Jinja-East, Rukungiri and Kyadondo-East where the Opposition have won. The rest the NRM have taken. The NRM are usually the winner of By-Elections.

It is forgetfulness that hits you when you remember back to the rest of the By-Elections. Therefore, getting 2 out of 7 is a good score in a way. Also, the President gets what he wants. The majority and security of the NRM Caucus. That is all expected. To think otherwise, is to be naive, that the NRM is going to give the opposition opportunity to overcome them. As long as the President is breathing, he will not accept that and will rig to secure otherwise. The President is not democratic and not planning to become so. Peace. 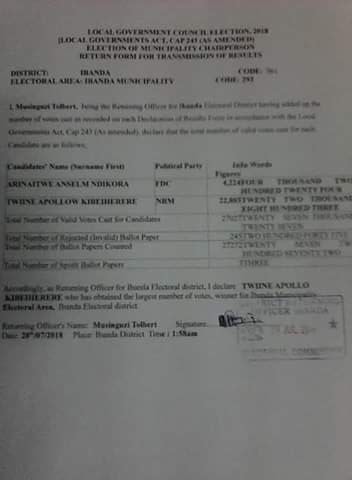 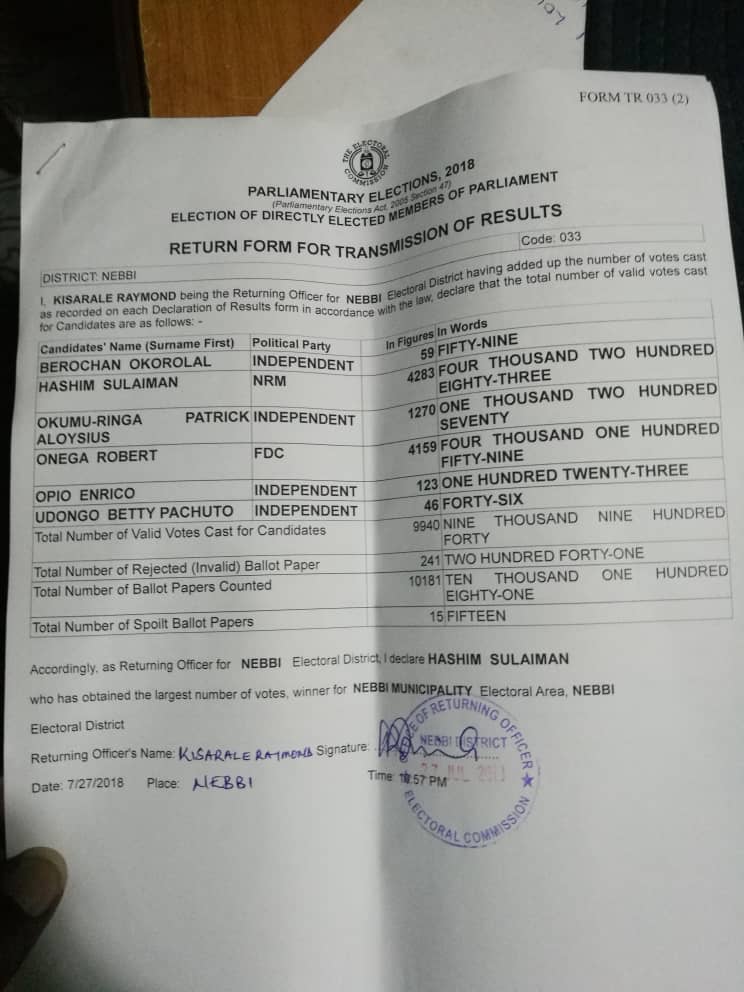 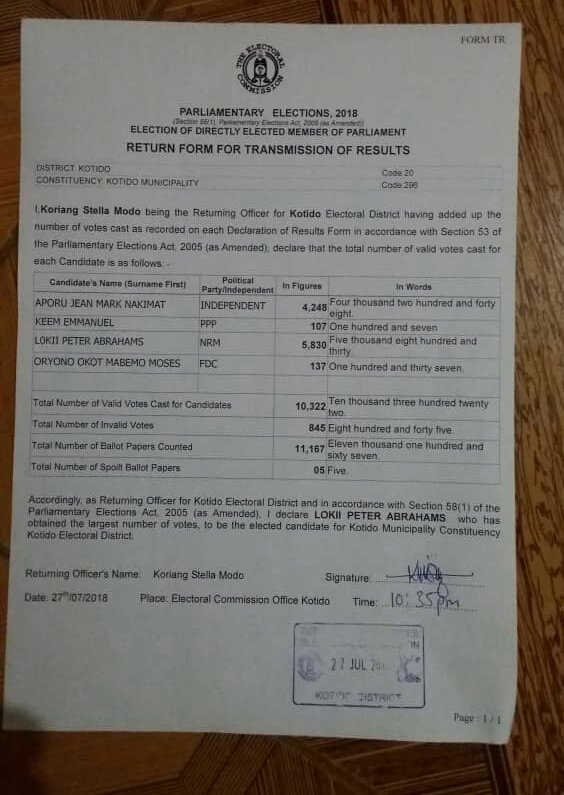 I have collected various sources the preliminary reports from Bugiri, Sheema, Apac, Kotido and Nebbi. This are not the official results, the are first released, when the Electoral Commission is releasing them Return Form for Transmission of Results, which is verified ballots from each polling station combined in the district. Therefore, until those are released, the numbers are jumping.

Bugiri have most likely gone to JEEMA, Sheema might swing between FDC and NRM, Apac could become a UPC MP, Kotido could go to either FDC or NRM, Nebbi are expected FDC, but might get rigged for NRM. However, this is just the preliminary results and the reality will be different when the EC and the machine have used their time. That is the longer the time for the results, the more worry is the for securing it in hands of the regime and not for opposition candidates.

Asuman Basalirwa and the Justice Forum won the MP contest for Bugiri Muncipality, that after a knocking campaign together with Robert Kyagulanyi aka Bobi Wine. Therefore, the opposition got this post and carved this newly created municipality out of the map of the President. They should not expect any development there, if the words of the President is sincere. Forum for Democratic Change candidate and the National Resistance Movement (NRM) lost here, they didn’t have the capacity or the ability to gain popularity, like JEEMA and Bobi Wine. No one had that moxy to do so.

There is a tight race between the National Resistance Movement candidate Virgina Plan Mugyenyi and Forum for Democratic Change candidate Dr. Elioda Tumwesigye. All reports through the day have been tight and swinging. But with time the FDC candidate had better numbers, but the final tally will really tell.

Patrick Ocan of the Uganda People’s Congress are expected to win the municipality over the National Resistance Candidate Akai Ayumu. The other independent candidates are trailing behind the NRM and UPC. This here seems like the stronghold of UPC get their votes, just like they have done in this area and the NRM are losing here too.

Here in the district, there been dozens of arrests of UPC members, the official number is 18 individuals on election day. Also, there are reports of ferrying voters and also open bribery.

Peter Abrahams Lokii was the National Resistance Movement (NRM) candidate here, while Moses Oryono Okot Mabeno are the Forum for Democratic Change (FDC) candidate. While the preliminary results in the newly created district have put the NRM in front, but only added independent candidates, therefore, you can wonder if the Electoral Commission have dismissed the FDC Candidate in spite before the election. Since, the reports was that FDC was gazetting a candidate.

Robert Onega are the Forum for Democratic Change candidate, the National Resistance Movement fielded Hashim Sulaima, than you have Patrick Aloysius Okumu Ringa, running as an Independent, but leaning towards NRM. Three more key Independent Candidates are Betty Udongo, Berocan Okurulal and Enrico Opio. However, how all of this will work out.

In this district there been reports of low-voter turn-out. During the evening, local radio station and New Vision said Sulaima have won the district. However, that wouldn’t be surprising, as the election rigging that have been reported was massive, as even open boxed with pre-ticked ballots was coming to the district last night.

We just have to see how this goes. But there is a lot in the air and see how this falls to ground. Let see them forms and get these results verified. Don’t postpone that, but deliver credible results, even as the observers from CCEDU are suspended for these elections too. Which is concerning, because than the CSO of volunteers are not able to report and make sure the rights of the voters are taken care off.

By-Election done in darkness, deliberately done by regime. Remember that, so that they can come with other reports, if that fit their paradigm since the CCEDU and Opposition will just fight with arguments. While CCEDU could have come with issues on the ground and also filed reports for the future. That should worry every citizen, that the NRM does this. Peace.