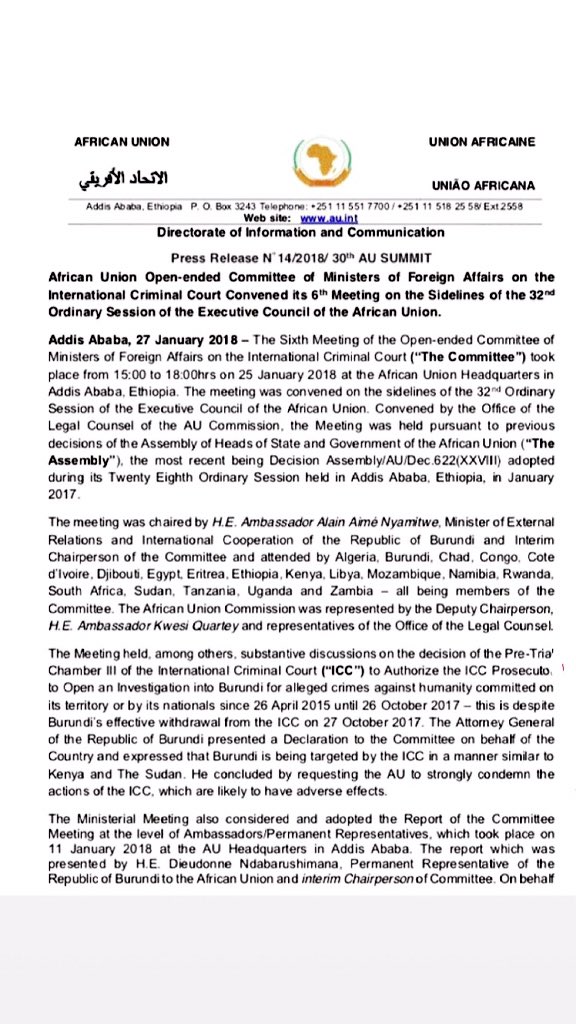 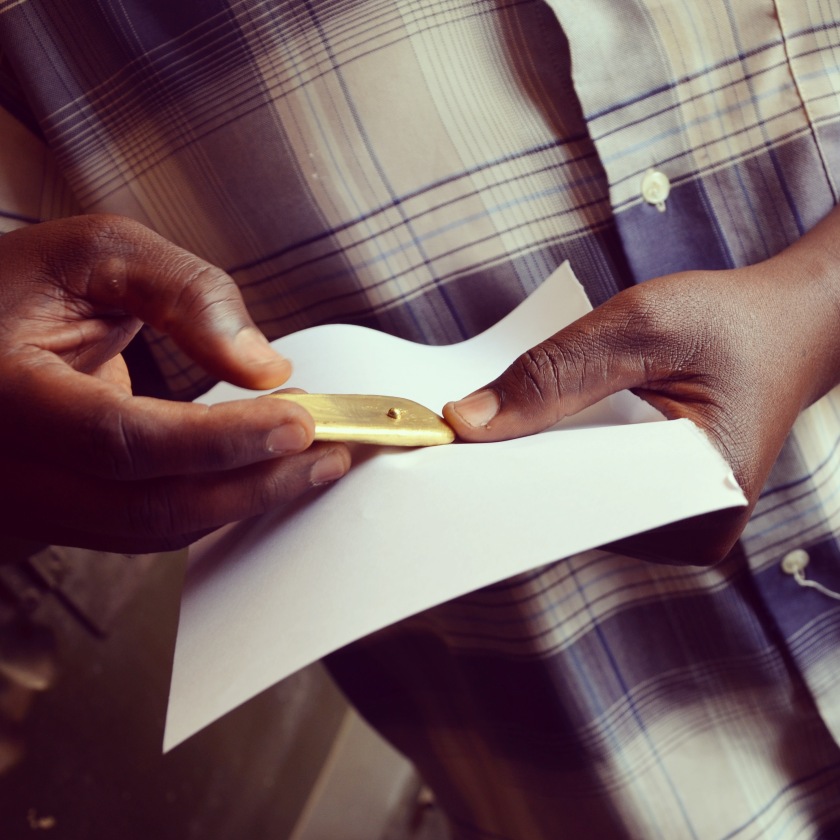 The Just Gold project is the first to successfully trace conflict-free and legal artisanal gold from mine site to export applying regional and international standards.

The Just Gold project began as a pilot in Ituri Province in 2015. Today’s announcement is a milestone for the project—moving it from the pilot stage—having proven a successful chain of custody from mine site to exporter.

“After almost two years of testing the Just Gold project with an aim to develop a chain of custody and due diligence system for artisanal gold in DRC, we are excited to share news of our success,” said Joanne Lebert, Partnership Africa Canada’s Executive Director.

“The Just Gold project can now move from a period of testing to implementation and ensuring we have a long-term, sustainable and viable solution for traceable, legal and conflict-free exports of artisanal gold from Congo,” said Lebert.  “We look forward to sharing our lessons learned with key actors and to deepening our collaboration with the DRC Government.”

The Just Gold project creates incentives for artisanal gold miners to channel their product to legal exporters—and eventually responsible consumers—by offering fair and transparent pricing and by providing capacity-building, such as technical assistance to miners in return for legal sales. Miners are taught better exploitation techniques and offered Juts Gold project equipment, in return for which any gold produced must be tracked and sold through legal channels.

“Proving that artisanal gold in eastern Congo can be conflict-free, legal and traceable is a major step in responsible sourcing efforts in the Great Lakes region. The government of Democratic Republic of Congo is taking major strides in complying with regional standards and demonstrating how the implementation the OECD Due Diligence Guidance for Responsible Supply Chains can contribute to progressive improvements in the sector, supporting artisanal gold men and women miners to enter international markets,” said Lebert.

Partnership Africa Canada signed a Memorandum of Understanding with the Democratic Republic of Congo’s Minister of Mines Martin Kabwelulu on September 2016, outlining support for the organization’s activities to strengthen natural resource governance. Specifically, the Ministry of Mines recognized the Just Gold project as a system of traceability and encouraged its implementation. Partnership Africa Canada has provided technical support to the Ministry since 2011.

Current activities in DRC include the Just Gold project, capacity building to implement both the International Conference on the Great Lakes (ICGLR) Regional Certification Mechanism (RCM) and the OECD Due Diligence Guidance applicable to high-value minerals, as well as support to civil society for monitoring and reporting on supply chain integrity.

Partnership Africa Canada has also undertaken research and analysis of the artisanal gold supply chain to understand women’s roles in the sector. Through sensitization and outreach, the Just Gold project improves awareness of women’s rights, and their right to access, control and benefit of resources. The project also supports and fosters women’s leadership opportunities through skills-building and training.

Partnership Africa Canada’s work in DRC developed from its engagement as a technical partner to the ICGLR, providing capacity-building to implement the six tools developed by the ICGLR’s Regional Initiative against the Illegal Exploitation of Natural Resources.

According to the report by the UN Joint Human Rights Office of MONUSCO (UNJHRO), at least 40 people, including five women and two children, were killed between 15 and 31 December 2016 across several cities of the DRC, among them Kinshasa, Lubumbashi, Boma and Matadi.

GENEVA, Switzerland, March 1, 2017 -Defence and security forces in the Democratic Republic of the Congo used excessive, disproportionate and at times lethal force to prevent and contain demonstrations in December 2016, a UN report published today has found.

According to the report by the UN Joint Human Rights Office of MONUSCO (UNJHRO), at least 40 people, including five women and two children, were killed between 15 and 31 December 2016 across several cities of the DRC, among them Kinshasa, Lubumbashi, Boma and Matadi.

The findings of the UNJHRO investigation show that 28 individuals were killed by soldiers of the Forces armées de la République démocratique du Congo (FARDC), six by agents of the Police Nationale Congolaise (PNC) and the remaining six during joint PNC and FARDC operations. All but two of the victims were killed by live ammunition.

During the same period, at least 147 individuals were injured by State agents, including 14 women and 18 children, and at least 917 individuals, including 30 women and 95 children, were arrested by defence and security forces. The report also notes that some protesters carried out acts of violence, including the killing of at least one PNC agent in Kinshasa on 20 December 2016.

The report indicates that most of the victims were unarmed civilians wounded by live ammunition on upper parts of the body, suggesting an excessive and disproportionate use of force by security forces in operations to contain the demonstrations.

“Such serious incidents are worrisome, particularly in the current context. The Government bears the primary responsibility to implement the confidence-building measures provided for under the 31 December 2016 Global and Inclusive Political Agreement to defuse tensions and create an environment conducive to the holding of peaceful elections. MONUSCO will continue to support efforts by the Government to achieve these objectives, including through investigation and strong sanction for all those responsible for serious human rights violations,” said Maman Sambo Sidikou, the United Nations Special Representative of the Secretary-General in the DRC.

The report also condemns the fact that while the PNC is normally in charge of crowd control operations, during the period under review, FARDC soldiers, including those of the Republican Guard and of the Military Police, were deployed to control crowds, functions for which they are not adequately equipped nor trained. The lack of accountability for past human rights violations, including those committed during the demonstrations in Kinshasa on 19 and 20 September 2016, may have encouraged a sense of impunity, and defence and security forces to commit further violations in December 2016.

“Once again we see serious human rights violations being committed blatantly and with complete impunity by the security forces, who employed excessive use of force against unarmed demonstrators, in flagrant violation of international human rights law and standards,” UN High Commissioner for Human Rights Zeid Ra’ad Al Hussein said.

“I urge the Government to ensure that those responsible for such violations committed in the context of events that marked the end of President Joseph Kabila’s second constitutional mandate are held accountable and brought to justice.  Measures should also be taken, at all levels, to ensure that the legitimate exercise of fundamental freedoms by the population will not lead to loss of lives and other serious rights violations,” Zeid said.

“I therefore call on the DRC Government to urgently adopt the law on freedom of peaceful protests and the law on human rights defenders. This is hugely important for the coming months as the DRC should move towards implementing the 31 December political agreement and preparing for the next presidential election,” Zeid stressed. 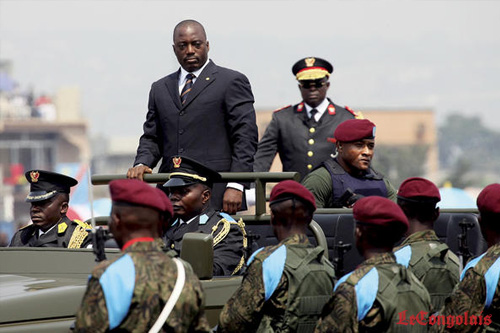 ADDIS ABABA, Ethiopia, February 16, 2017 – The African Union (AU), the United Nations (UN), the European Union (EU) and the International Organization of La Francophonie (IOF) are increasingly concerned by the continuing impasse in the dialogue among the political stakeholders in the Democratic Republic of the Congo (DRC) related to the implementation modalities of the 31 December political agreement.

The four partner organizations note that six weeks after agreeing on the modalities of a transition period leading to the holding of peaceful and credible elections by December 2017, the parties are yet to conclude discussions on the effective implementation of the agreement. This situation has the potential to undermine the political goodwill that led to the signing of the 31 December agreement.

In this context, the four partner organizations call on all stakeholders in the DRC, including the presidential majority and the opposition, to redouble, in good faith, their efforts towards a speedy conclusion of the ongoing talks.

The four partner organizations reaffirm the need for all parties to rally behind the mediation efforts led by the Conférence épiscopale nationale du Congo (CENCO), and recall that the full and timely implementation of the 31 December agreement is critical in upholding the legitimacy of the transitional institutions until elections.

NEW YORK, United States of America, January 5, 2017 – The United Nations Security Council today welcomed a comprehensive political agreement in the Democratic Republic of the Congo (DRC), and called on all stakeholders to continue to exercise flexibility and compromise in their discussions to swiftly resolve all pending issues, particularly those related to the holding of elections in the country within 2017.

“The Security Council is encouraged by the spirit of flexibility and compromise demonstrated by Congolese political leaders in reaching this agreement, for the stability, peace, development and consolidation of constitutional democracy in the DRC,” said a Presidential Statement read out at a formal meeting of the 15-member body today.

In the Statement, the Council also urged all political parties which didn’t sign the agreement to do so.

The agreement – facilitated by Conférence Episcopale Nationale du Congo (CENCO) mediators, and reached in DRC’s capital, Kinshasa, on 31 December 2016 – represents a significant step towards a peacefully managed transition consistent with the democratic principles enshrined in the country’s Constitution.

This new agreement followed an initial political agreement between part of the opposition and the majorité présidentielle reached in October under the auspices of the African Union facilitation.

Also by the Presidential Statement, the Council expressed hope for a swift implementation of the agreement in order to organise peaceful, credible, inclusive and timely presidential, national and provincial legislative elections no later than December 2017, as well as leading to a peaceful transfer of power.

“The Security Council stresses the importance for the Government of the DRC and its national partners to take all necessary steps to accelerate preparations for the elections without further delays, within the agreed timeframe,” added the Statement in which the Council also stressed the importance of the inclusion of women in the follow up and implementation of the agreement. 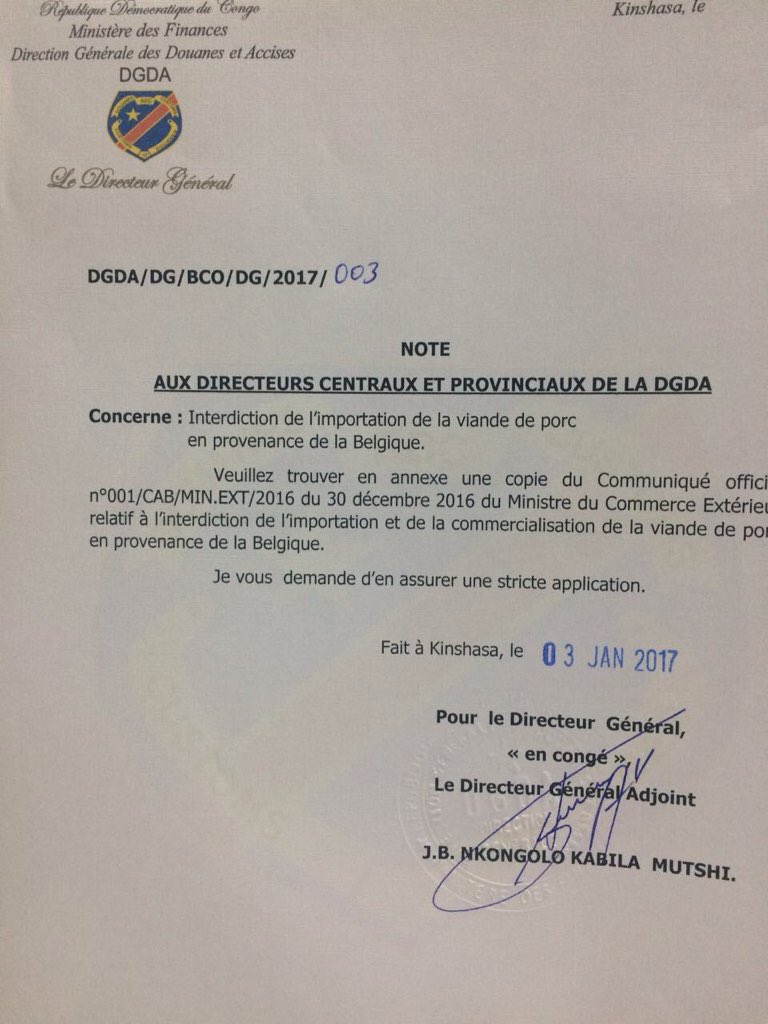 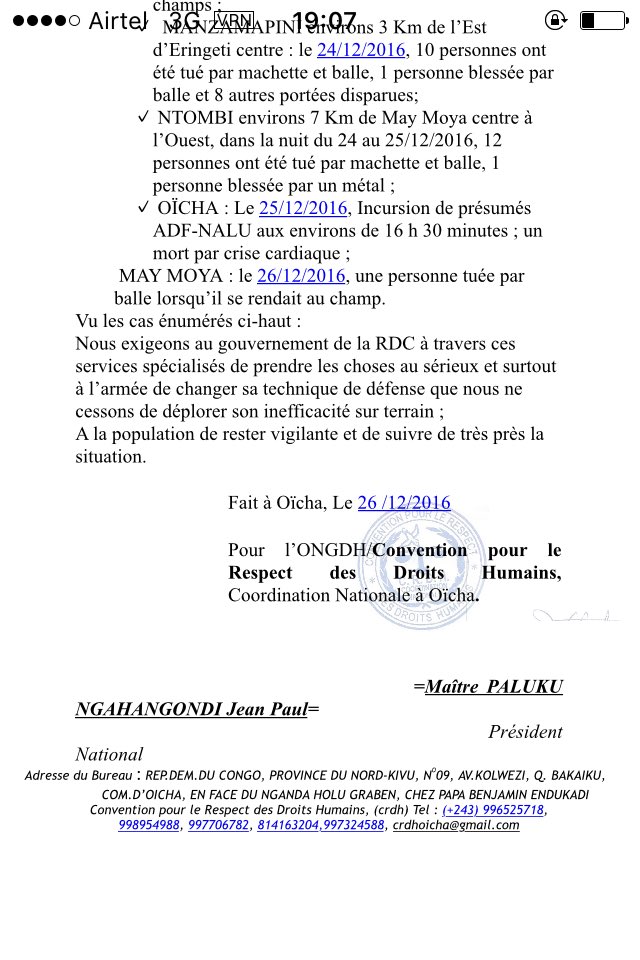 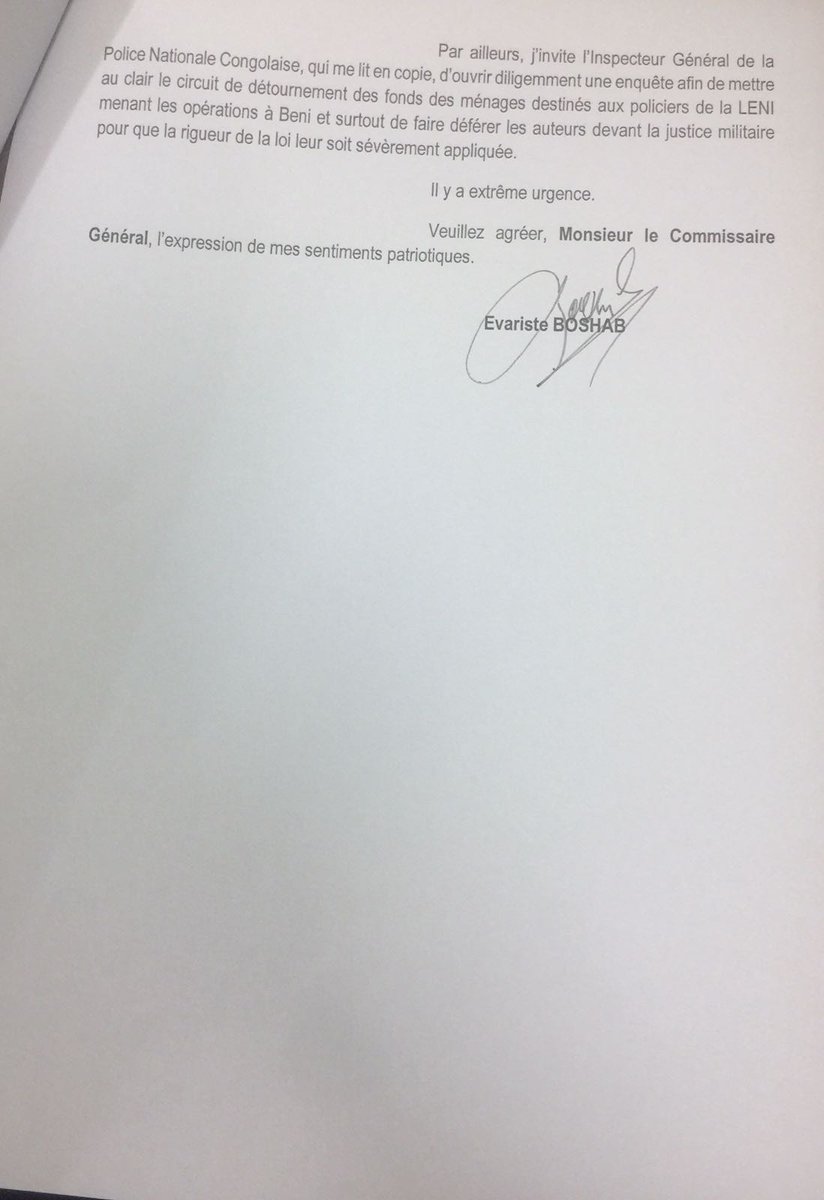