Archive for the tag “Banjul Protocol”

Tanzania: CCM leaves the Continental Human Rights Court, which is located in Arusha!

The United Republic of Tanzania revoked or withdraw from the African Charter and the Protocol, which states their membership and the possible rights for trying cases from the state its located in. This means the African Court on Human Rights, which was opened in 2004 and based on the “Banjul Protocol” from the year of 1993. Therefore, the Chama Cha Mapundzi (CCM) are leaving the Courts after its been existing for 15 years on its own soil.

That’s why its rich for all other African Countries to ratify and be apart of this, when the one state where the Courts are, doesn’t have a mandate to investigate and follow up cases. As the CCM and the United Republic of Tanzania withdraws from the Court connected to the “Banjul Protocol” on Human Rights. That is how faulty and week it is. As it sent its declaration signed on the 14th November 2019 and delivered to the African Union by the Permanent Mission to the African Union (AU) on the 21st November 2019.

This is what stipulation they used:

“4. For any State Party ratifying or acceding subsequently, the present Protocol shall come into force in respect of that State on the date of the deposit of its instrument of ratification or accession.

5. The Secretary-General of the OAU shall inform all Member States of the entry into force of the present Protocol.

6. At the time of the ratification of this Protocol or any time thereafter, the State shall make a declaration accepting the competence of the Court to receive cases under article 5 (3) of this Protocol. The Court shall not receive any petition under article 5 (3) involving a State Party which has not made such a declaration. 7. Declarations made under sub-article (6) above shall be deposited with the Secretary-General, who shall transmit copies thereof to the State parties” (Protocol to the African Charter on Human and Peoples’ Rights on the Establishment of the African Court on Human and Peoples’ Rights, 1993).

So, now the Tanzanian government withdraw themselves from the Banjul Protocol. They have now left the Court, which is located in Arusha. Until CCM did this, it was 26 countries, where the cases could be heard from here, but now its 25. that is really rich from the President and the government there. It is like the United States withdrawing from the United Nations, which has its Headquarters in New York or the French leaving the European Court of Human Rights, which is located in Strasbourg, France.

The CCM left now and has withdrawn itself from the “Banjul Charter” because this state doesn’t want to answer to their crimes against humanity, against the oppression or their acts which limits the citizens their freedom, liberties and possible opportunities to assemble.

That’s why the CCM leaves this court, because its afraid to answer to their actions against their own. They cannot manage to be questioned or investigated, if any citizen or party petition a case and the Courts cannot investigate, since the state has withdrawn. The Court can do this in 25 states, but not in Tanzania where its located.

This Court should be moved from Arusha, Tanzania. It is located in a Republic where the “Banjul Protocol” is ratified and followed. Because, apparently that is not happening anywhere in the United Republic. That ship has sailed under President Magufuli and his team. Peace. 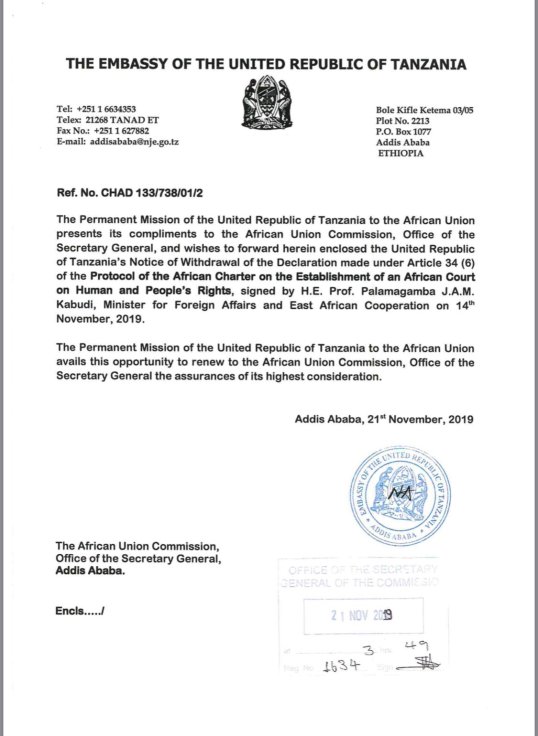