Honourable Evelyn Anite, the State Minister for Investment and Privatization, the one who was speaking on the 19th June 2017 at the Constitutional Square in Kampala. This is where she uttered words of special disgrace. Especially in a free-market ideology that the National Resistance Movement (NRM) has bought into with the Structural Adjustment Plan (SAP). Together with the privatization of all sort of markets. Uganda Telecom isn’t the only Cellphone provider or the ones delivering telephone services in Uganda. There are dozens owned by local and by foreign investors. These are all from MTN to Airtel, even Smile Telecom and others. These are in competition and is one of the most profitable industries in Uganda.

Therefore, just look into what the Privatization Minister said yesterday, which is interesting.

“Once the managerial problems at Uganda Telecom have been fixed, Ugandans will be compelled to own a UTL Simcard just like having the national identity (ID) card Evelyn Anite, the outspoken State minister for Investment and Privatization has revealed” (…) “”It did not take us to get somebody from another country to come and fix what is [problems] in UTL. We’re not yet done but we are close by…I want to tell you something; that once we fix the problems in Utl, it is going to be compulsory for Ugandans to hold a UTL line just as it is for you to have a national ID, you must have a Ugandan line. That is the spirit of patriotism”, she said” (URN, 2017).

Sometimes, there should be given some public ethics and governance practices to fellow ministers, as their reach and their possible outreach of laws and proposals. Even the State Minister Anite should learn some parts of the Uganda Communications Act of 2000, which says: “56. Commission to encourage fair competition. The commission shall, in the performance of its functions under this Act, promote, develop and enforce fair competition and equality of treatment among all operators in any business or service relating to communication“ (Uganda Communication Act, 2000). So the laws abiding by the state itself, says it is supposed to be fair, but what is even more neat.

The Second section in Part X, which is worth looking at, since this is the exact part that the operators and the Minister totally forgotten or overlooked, if ever have read: “57. Prohibition of acts exhibiting unfair competition. An operator shall not engage in any activities, whether by act or omission, which have, or are intended to or likely to have, the effect of unfairly preventing, restricting or distorting competition in relation to any business activity relating to communications services. Without limiting the generality of subsection (1), an act or omission referred to under that subsection shall include— any abuse by an operator, either independently or with others, of a dominant position which unfairly excludes or limits competition between the operator and any other party; entering any agreement or engaging in any concerted practice with any other party, which unfairly prevents, restricts or distorts. competition; or (c) the effectuation of anticompetitive changes in the market structure and, in particular, anticompetitive mergers and acquisitions in the communications sector. Neither the Uganda Telecom Limited nor any of its affiliates shall hold or acquire an ownership interest in the second national operator or its affiliates. Neither the second national operator nor its affiliates shall hold or acquire an ownership interest in the Uganda Telecom Limited or any of its affiliates” (Uganda Communication Act, 2000).

So the idea of the State Minister of Privatization are actually thinking of making provisions for the failing state-owned company Uganda Telecom, to get all citizens to have sim-cards and making them costumers in the midst of free-market and also in the midst of all competitions. This is clearly a massive breach of the law and these pieces of legislation. You don’t need to be a scholar or a man of wisdom to understand the possible problems of UTL. This clearly can be seen as limiting the competition and the other companies, as the state only in this way looks into UTL and not helping the other companies. Because she didn’t say all citizens should have MTN and Airtel too, only mentioned UTL.

This is not enforcing free and fair competition and equality of treatment between them. The words of State Minister Evelyn Anite isn’t enacted or become law, even a motion to Parliament. But shows the disregard for functioning law by the own Parliamentarians. That is clearly needed and Speaker Rebecca Kadaga should get the functioning staff to teach their fellow MPs. So they know their laws and provisions within their departments. This so they don’t create these sort of embarrassment, which Anite has done yesterday and revealed today. If not maybe a NRM Caucus at Kyankwanzi could be a learning seminar instead of bashing in the glory of the President and his controlling ways. Peace. 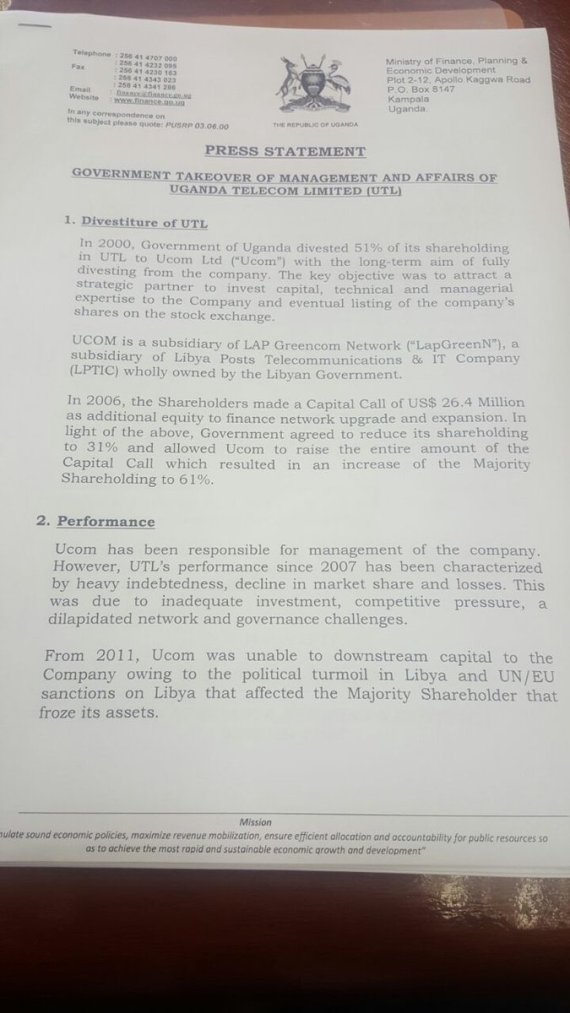 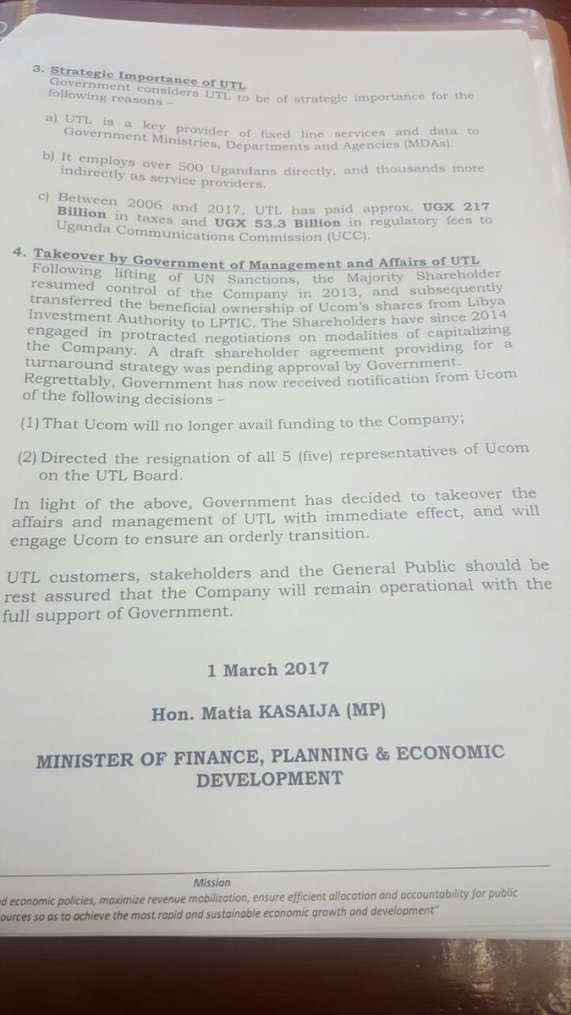