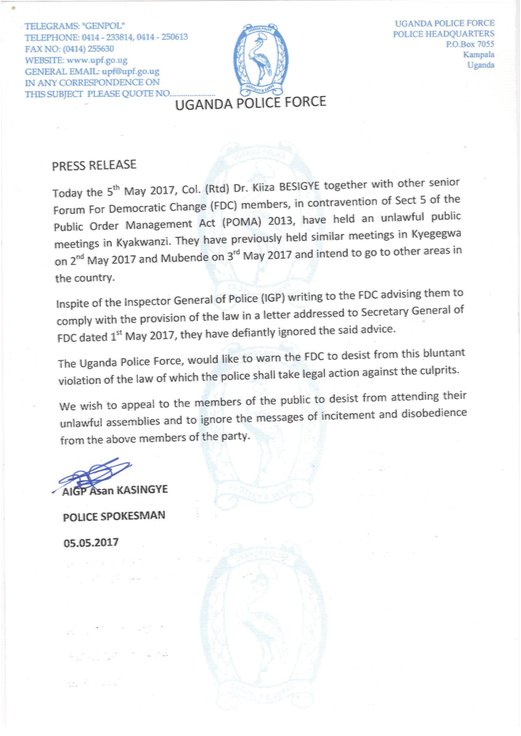 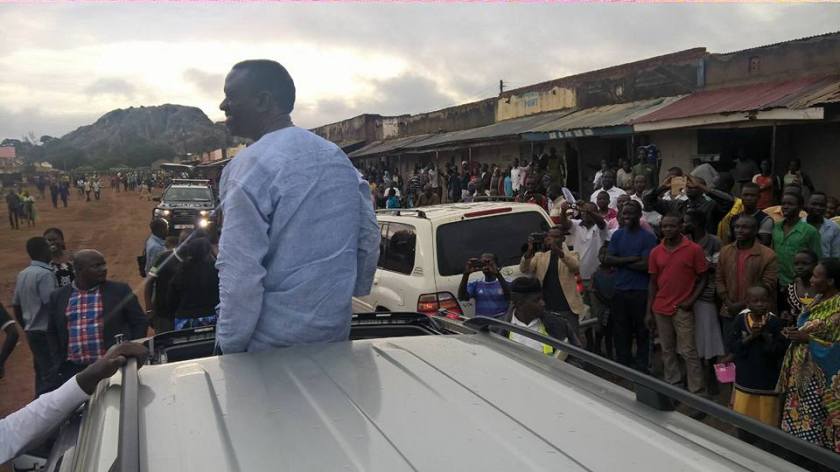 That the National Resistance Movement and the Uganda Police Force have an issue with Forum for Democratic Change (FDC) and their leader Dr. Kizza Besigye. Therefore, he has a track-record for being detained and spent days in countless of prisons while awaiting charges. However, the persistence of courage and certainty of trying is there. So after months of turmoil and trouble, the FDC and Besigye we’re planning to hold some rallies and meeting in Teso Sub-County and in Soroti. That was clearly violating the rules and public engagement that the NRM Regime couldn’t handle.

The we’re even gun-fire and tear-gas today at Ngora Town, as the FDC Woman Sarah Eperu we’re swiftly detained at the Central Police Station in Soroti. The convoy of FDC cars into the rallies was also stopped on the highway as they had plans and rallies to hold in the region.

The Police reacted to Journalists Ronald Odongo and George Emuron:

“However, East Kyoga Regional Police Commander Francis Tumwesigye says police was not informed about the planned celebrations” (Uganda Radio Network, 25.03.2017). So the Police used the Public Order Management Act (POMA) or the ABA (Anti-Besigye Act) to aggressively block and stop the rallies. This in a district where the Police Force cannot contain ordinary violence as the spiral of murder and killings have certainly hit the district of Francis Tumwesigye, who should have enforced more of the personnel to solve the murders, than throwing tear-gas and shooting bullets in the crowds flocking around Besigye.

Interfering with the Police Work:

“Given the intricate link between businesspeople, politicians and gun related crime in the region, senior police officer Obura told this newspaper that: “Investigations get complicated. My appeal is that police should be allowed to do its job, to investigate cases to the best of [its] ability with utmost independence. When politicians interfere they make our work difficult.” (…) “One District Police Commander who was transferred to northern Uganda told this newspaper on condition of anonymity that he had been relocated because he refused to “budge to the interests of those Teso mafias. You don’t do as they say they mess you up, they set you up as they did with Mr Okello Obura” (Okuda, 2017).

So it is the Teso Mafia that makes it impossible for the Police to solve the crimes and the killings, that initially makes the Police Commander forced to prove his capacity by shutting down political meetings and rallies of the FDC. Shows lacks of integrity and of the ability to serve the community when they work in silence on murders, but can easily throw tear-gas in Ngora.

“Yet in its remoteness, Komuge buries the ignoble secrets of a village consumed by the toxic tales of extra-judicial killings, lawlessness and impunity stringed to political and military heavyweights powerful enough to cover their tracks or frustrate prosecution even of incarcerated suspects.  Human rights activists that raise an alarm are targeted, forcing some to flee the locale, while police officers investigating the cases find themselves momentarily transferred or prosecuted for alleged command lapses whenever they close in on those implicated” (Okuda, 2017).

So you can wonder if the Police are unwilling or transpiring with the criminals in Teso and Teso Sub-Region, as the Mafia or Criminal enterprise can control society and kill of the ones questioning or owning the resources the powerful men wants. Therefore, the Police Force is merely a safeguard for the citizens.

It’s weird that the FDC has to have these issues to have rallies and also commemorate a former MP Phillip Ekemu in Ngora, as the convoy of FDC was stopped before doing so today on the highway towards it. So now Besigye convoy we’re able to celebrate the memory of the deceased MP, but not able to hold rallies in Ngora, as the local police force had to use tear-gas.

“Besigye had planned to hold massive rallies in Teso Sub-region this week but the police warned him to abort his intentions, assuring him that such rallies would be handled as illegal assemblies” (Grejeen News Uganda, 25.03.2017). So the Soroti and Teso Sub-region handled it as illegal assemblies, as expected, as the Police Force have to handle this as criminal, but cannot handle murder investigations. The killings and extra-judicial murders should be focused as people are dying.

The FDC and Besigye had planned rallies for Katakwi district tomorrow. Certainly, these will also be meet with hostile meeting the Police. Just as the tear-gas who appeared today in Ngora in the Teso Sub-Region. This is just really a proof of the non-democratic environment in Uganda, when the FDC cannot even hold rallies and public meetings, as the NRM can travel as they please. Something they really do. Peace.