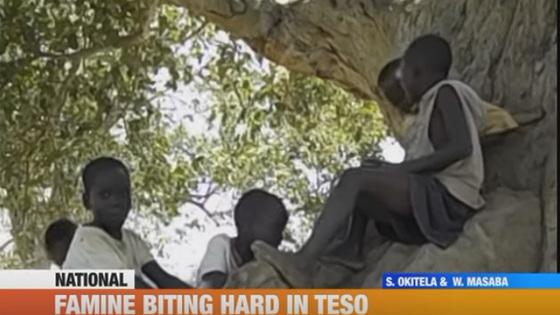 “Once a government is committed to the principle of silencing the voice of opposition, it has only one way to go, and that is down the path of increasingly repressive measures, until it becomes a source of terror to all its citizens and creates a country where everyone lives in fear.” – Harry Truman (Special Message to the Congress on the Internal Security of the United States, August 8, 1950).

Certainly, the National Resistance Movement and their government doesn’t seem to care how they look. None of their pledges or even written letters to the Local Government matters. Not even in the midst of famine and starvation. You would think that a government and their agencies had sense of keeping their promises to the ones who needs the most basic in life – as their plates are empty after droughts and bad governance. Therefore, the NRM has no sense, when the Bukedea district are reacting that their promised food relief is less; than promised from the Office of the Prime Minister (OPM) Dr. Ruhakana Ruganda and his department. Certainly, this is disrespecting the people and the citizens of Bukedea. Take a look!

“Mike Okwii, the district secretary for health and social services wants the matter investigated expeditiously before they can distribute what they have received. “According to the letter signed by the commissioner of disaster and preparedness, Bukedea was supposed to get 800 bags of posho and 400 bags of beans. But the district has received only 400 bags of posho and 50 bags of beans, which is shocking. So for us at the district leadership, we have decided not to distribute this food. Not until when OPM delivers all the food items”, he said. Okwii confirmed that as of now, nobody has given them any response as to why the Office of the Prime Minister delivered consignments that have fewer supplies that what was declared. “Nobody has given us the right answer why they delivered less food compared to what is on the delivery note. The minister for Teso Affairs is going to follow the matter because you can imagine the minister came to Bukedea to allocate food to the sub-counties. Little did she know that she allocated food which is not even there”, he added (URN, 2017).

The reason for the disrespect is staggering as the reports of termites and insects to survive, proves the lacking governance and upkeep of institutions. Also, the agricultural sector has been left behind, as the irrigation and thinking of how use water in farming. Certainly, the food relief is a way of making sure the people eat while they wait for next season and possible time to start farming again. These in regions that has been hard hit and the government had been warned by FAO and FEWSNET, so these reports should have forewarned them.

“Food is required besides the medication. If someone is sick, the first treatment is food; medicine works well on a well fed body,” said Dr. Chebitai” (New Vision, 2017). Therefore, with the knowledge that the state still has the capacity to not deliver what so needed and necessary is not only a theft, but taken food of the plates of those who starve. That the NRM has the audacity to this proves how they can easily neglect their citizens. Even taking away their first treatment, that is the level of disappointment, the ruling regime can to do their own. Peace.

There are something deeply wrong, so sincerely wrong when the citizens doesn’t get needed food relief and have to eat termites and insects to survive. This is the state of the famine now in Teso Region, in Katakwi, Amuria, Bukedea and Kaberamaido district.

“Mr Robert Okitoi, the Amuria District council chairperson, said “The situation is bad, people are now eating termites. I think the government should just declare a state of emergency for the regions of Teso, Karamoja and Lango.” (NTV Uganda, 01.06.2017). On the 26th April 2017 the Parliament has passed a motion to declare ‘State of Emergency’ in Uganda, but the President and the State House has not done anything about it.

Still, a local farmer wrote a piece to the Chimp Reports that has some valuable assessments:

“The current hunger in Teso has largely been attributed to drought, while this assertion may hold some truths; there is increasingly evidence that the Ministry of Teso Affairs has not done its part. Hunger in Teso is as a result of both internal and external factors. For many years, the region has been experiencing declining productivity and this was recently worsened by drought. For districts like Ngora, Bukedia and Kumi, land fragmentation has heavily affected productivity” (…) “Clearly besides drought, Teso food systems are in a crisis and our expectation was that the Ministry of Teso affairs working with other stakeholders would work to address this problem. Our view is that hunger should be among the ‘affairs’ that Ministry of Teso Affairs should be engaged in.Agriculture remains a major livelihood for our people in Teso and therefore we require urgent response from Ministry of Teso Affairs on its plans to help our people get out of the current hunger crisis”(Akorikin, 2017).

This here proves that the drought is just the last piece of the straw in a bigger problem, that even the State Ministry has not been in-charge and had the oversight of the Teso Region. There are lacking the support they need. Still, the government still have done something now and then. Like this one relief to Kaberamaido district: “Kaberamaido district has finally received 12, 000 kilograms of relief food from government valued at Shillings 33 million. Kaberamaido is among the districts battling a severe food crisis resulting from crop failure due to prolonged drought. The most affected areas in the district are Ochero, Bululu, Kobulubulu, Kaberamaido, and Apapai sub counties. With over 5,000 households facing starvation representing about half of the total population in the district, the 12,000 kilograms of flour delivered is far from solving the food crisis” (Odongo, 2017). That means on the 30th April 2017, the government delivered 12.000kgs of flour that is estimated to be 231,000 citizens in the district alone. Therefore, you don’t have to be rocket scientist to know that this food relief to the one district isn’t enough…

“The minister for Relief and Disaster Preparedness, Hilary Onek, has offered a bit of advice to the hunger-stricken; stop selling the little food you have left. Onek said the weather has become so unreliable for Ugandans to hold on to the little hope for better yields. “They should consider family needs first before selling all the food. Districts like Lira had a lot of food but it [food] was sold to traders from Kenya, South Sudan and even Rwanda because people want money,” he said in an interview. Asked whether government would consider banning the sale of food to outsiders, Onek said they wouldn’t, in the spirit of the East African Community. “That is not an option we will consider; we only want people to behave responsibly to take care of their family needs before they sell all the food,” he said” (UMDF, 2017).

So now the Minister Onek gives advice to the impoverished citizens, so that they are careful with their food stocks, as the relief of the districts are not up-to par. Therefore, that they didn’t stock the extra foods and now they tell the families to take of it. The government could have used their resources and built food-stocks, instead of living hand to mouth. The small-time farmers in the Teso-Region certainly, needs more than fear of selling what they don’t have, they need support and food relief.

The state also has to facilitate the farmers, not in Operation Wealth Creation or Jerry-Can irrigation, but real projects, storage of food-stocks and recreate farmers Co-Ops in the districts and sub-counties to collectively earn and work together to get better yields and also productivity in general. But that isn’t a scheme and way the National Resistance Movement can corrupt or thieve the funds from. Therefore, that will not happen and is the reason why the similar institutions are gone during the decades of President Museveni.

The Teso Region and these district needs help, the man-made famine together with the drought that has worsen it. So the Government has to charge and actually make a difference, not just thieve monies away from Kampala. Peace.