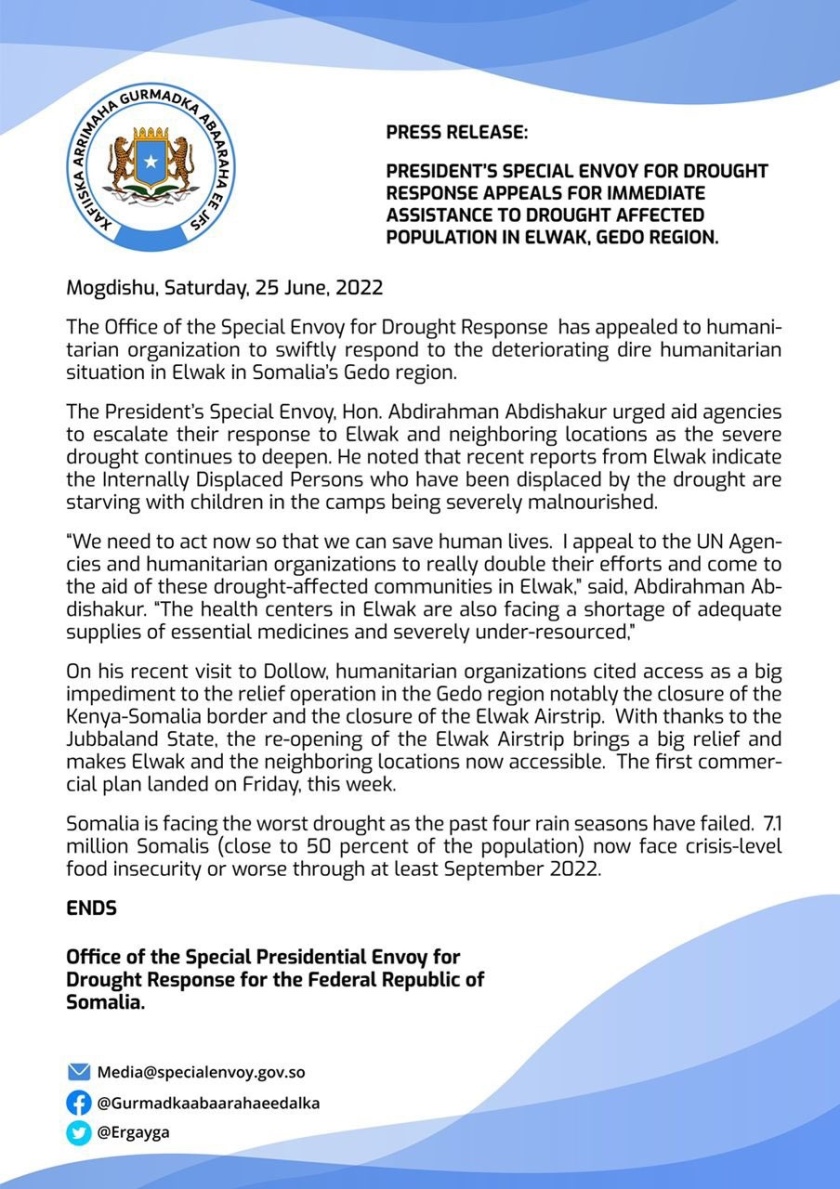 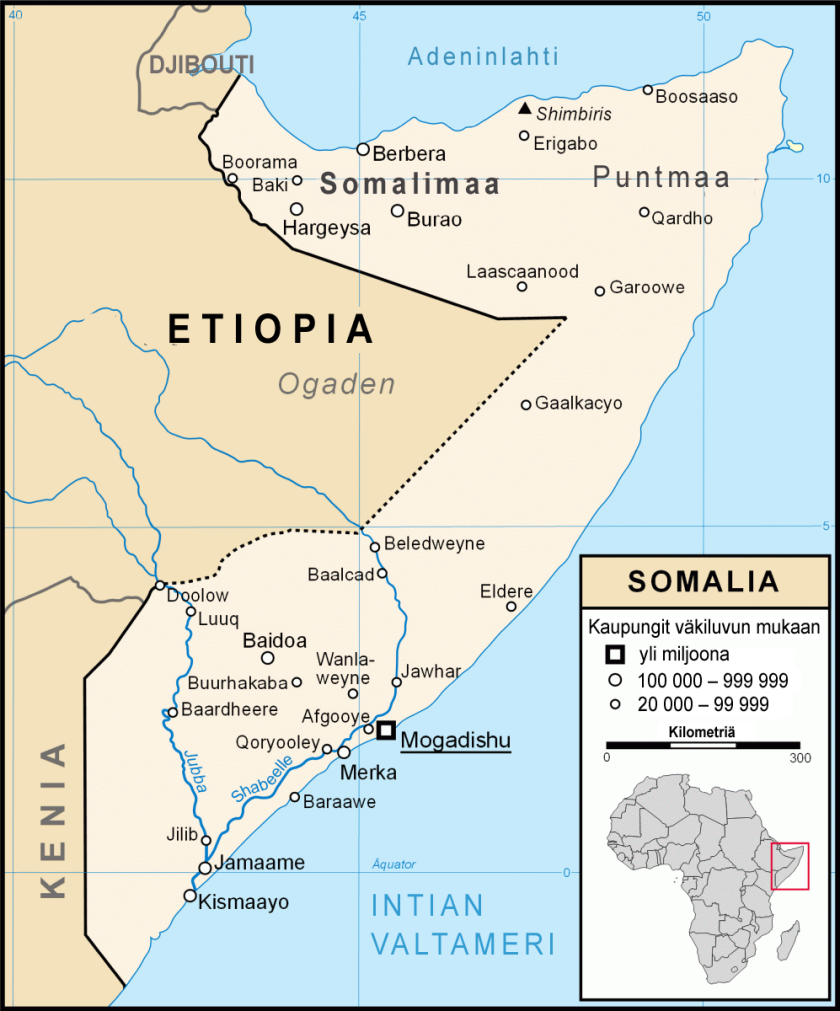 MOGADISHU, Somalia, June 6, 2022 – A historic fourth consecutive failed rainy season, skyrocketing prices and an underfunded humanitarian response have resulted in a 160 percent increase in people facing catastrophic levels of food insecurity, starvation and disease in Somalia. With no end in sight for the devastating drought affecting the country, the risk of famine looms larger than ever. An urgent increase in support from the international community is essential to avert famine.

A new report from the Famine Early Warning Network and the Food Security and Nutrition Analysis Unit of the Food and Agriculture Organization of the United Nations, based on a rapid assessment by multiple United Nations agencies, shows that 7.1 million Somalis (close to 50 percent of the population) now face crisis-level food insecurity or worse through at least September 2022. Of those, 213,000 people face catastrophic hunger and starvation, a drastic increase from the 81,000 forecast in April. More areas are at risk of famine, particularly in the south of the country in regions where insecurity and conflict makes humanitarian access more challenging.

These figures reflect a food security situation that is expected to deteriorate rapidly over the coming months. United Nations agencies and partners are now focusing their limited resources on famine prevention to protect the country’s most vulnerable, as meteorological organizations warn that another below-average rainy season could follow later in the year.

“We are staring at a potential calamity; failure to act now will be tragic for scores of families in Somalia,” said Adam Abdelmoula, Deputy Special Representative of the Secretary-General, Resident and Humanitarian Coordinator. “Somalia is in danger of entering an unprecedented fifth consecutive failed rainy season, meaning hundreds of thousands of people face the risk of famine. Famine cost the lives of 260,000 Somalis in 2010-2011.This cannot be allowed to happen again in 2022. It is urgent that more is done to avert this risk and done now,” he said.

Collectively, humanitarian agencies have reached 2.8 million people between January and April 2022 with lifesaving and livelihood assistance through drought assistance and famine prevention programmes, but the new assessment clearly indicates that the scale of assistance currently being delivered and funding from the international community is not yet sufficient to protect those most at risk.

Food prices affecting the most vulnerable

Somali families are increasingly unable to cope with soaring food prices as local food has become scarce due to consecutive seasons of poor or failed domestic production, livestock deaths, and imported food prices reaching record levels – in part because of supply chain impacts due to conflict in Ukraine. In parts of the country, food prices have risen 140 to 160 percent, leaving poor families hungry and destitute.

“We must act immediately to prevent a humanitarian catastrophe. The lives of the most vulnerable are already at risk from malnutrition and hunger, and we cannot wait for a declaration of famine to act,” said El-Khidir Daloum, WFP’s Country Director in Somalia. “It’s a race against time to prevent famine and WFP is scaling up as much as possible, prioritizing our limited resources to save those most at risk. But as these new figures show, there is an urgent need for more resources to meet this escalating hunger crisis,” he said.

Around 3 million livestock have died due to the drought since mid-2021, and the decline in meat and milk production has also led to worsening malnutrition, particularly among young children in pastoral areas who are dependent on local supply. As of May 2022, an estimated 1.5 million children under the age of five years face acute malnutrition through the end of the year, including 386,400 who are likely to be severely malnourished – an increase of 55,000 compared to previous estimates.

The malnutrition crisis is likely to worsen as the nutrition situation deteriorates further in the affected areas, with children and vulnerable people the hardest hit. “This is a child crisis. It’s not only about water or nutrition, but also about children losing education, falling vulnerable to child protection issues and having poor health; all impacting their future,” said Angela Kearney, UNICEF Somalia Representative. UNICEF has supported the treatment of more than 114,000 children with severe acute malnutrition between January and April 2022. “We are treating children but now we need further funding to prevent a famine and protect the future of every Somali child,” she said.

The grim food security situation is unfolding as humanitarian funding from the international community has so far fallen short of coming close to what actors need to avert a famine in the country. The 2022 Humanitarian Response Plan is currently only 18% funded. “The support required has not yet fully materialized, and hundreds of thousands of Somalis are at a very real risk of starvation and death,” said Etienne Peterschmitt, FAO’s Representative in Somalia.

“It’s a tragedy to see the level of distress that rural communities in particular are experiencing, and we are being limited in what we can do to prevent this extraordinary suffering. We’re calling on the international community to act fast while we still have some hope of preventing collapse of livelihoods, further and potentially massive population displacement from rural areas to IDP camps and widespread famine in Somalia,” he said.

The country is experiencing its fourth consecutive failed rainfall season with harrowing impacts for families and children, raising fears of a repeat of the 2011 famine.

MOGADISHU, Somalia, June 6, 2022 – Somalia’s crippling drought, the worst in at least 40 years, has forced more than half a million people to abandon their homes in search of food and water in the last four months, with mothers terrified they will also lose their children, Save the Children said today.

The country is experiencing its fourth consecutive failed rainfall season with harrowing impacts for families and children, raising fears of a repeat of the 2011 famine that killed over a quarter of a million people- half of them children under five. Experts are warning there is now a credible risk the next rainy season in October – December will also fail, which would further deepen the already severe humanitarian emergency.

With the prolonged drought combined with inadequate humanitarian funding, globally disrupted supply chains, and food prices skyrocketing due to the conflict in Ukraine, mothers in the country are telling Save the Children they are unable to feed their children and fear for their lives.

55-year-old Suad, a farmer, lives in a camp in the Sanaag region. She arrived at the camp four week ago with her seven children and disabled mother after the drought killed off her livestock.

Suad told Save the Children that the previous drought in 2017 devastated her livestock. At the time, she had 400 cows and goats and was left with just two, although she was able to recover some of them. Now, the drought has left her with almost nothing, and this time she fears she will not be able to salvage what remains of her pastoralist lifestyle.

She said: “The drought has brought despair. I don’t know what will become of us. I can’t feed my family, I feel helpless. How can you provide a living for your children when you’ve lost your livelihood? It’s a very difficult time, we’re all on the move in search of a better life.”

Sitting from across her mother,12-year-old Samia, said: “If we had rain, life would be so different. I wouldn’t need go out in search of water and I would have more time for my studies.”

The number of new arrivals to camps in Hargeisa from drought affected regions is rising daily, Save the Children said. Saud is among 524,000 people in Somalia who have been forced to abandon their homes in search of food and water in the last four months. Across Somalia, 6 million people are suffering extreme hunger, with over 81,000 living in famine like conditions. The UN estimates that 1.4 million children could be acutely malnourished by the end of this year if the deteriorating situation is not addressed.

As the threat of famine looms, with estimates suggesting as close as next month, the UN warns, an urgent and timely scale up of humanitarian assistance is required to avert death and devastation for families across Somalia.

Mohamud Mohamed, Save the Children’s Country Director in Somalia, said:

“We saw this coming. A two-year drought in Somalia and the Horn of Africa, which has decimated crops and livestock and eroded people’s ability to cope, with mothers having to make the difficult choice of putting their children to sleep hungry. Malnutrition rates among children is on a steady rise and the UN has warned that as many as 350,000 children could die by the summer if we do not act and yet the window of opportunity to act and avert a catastrophe is shrinking with every passing day.

We are calling on governments and the international community to make the right decision and prevent the suffering of millions of people and possible deaths of thousands of people from this climate-induced hunger. A localized response that targets saving lives and livelihoods must be prioritized including supporting local food production, protecting the poorest, and making food affordable.”

Save the Children is working to help affected communities in Somalia to cope with the immediate humanitarian effects of drought. We are providing emergency water supplies, treating children who are malnourished, supporting education systems so that children do not miss vital learning while displaced by drought, running health facilities, and providing cash and livelihood support to the most vulnerable.

The new allocation will focus on underserved, hard-to-reach areas and complements the $14 million Rapid Response grant from the UN Central Emergency Response Fund.

NEW YORK, United States of America, June 3, 2022 – The Deputy Special Representative of the Secretary-General, UN Resident and Humanitarian Coordinator for Somalia, Mr. Adam Abdelmoula, launched a new allocation of US$20 million from the Somalia Humanitarian Fund (SHF) to provide immediate assistance to communities at risk of famine in priority locations.

“A disaster is unfolding in Somalia due to severe drought,” said Mr. Abdelmoula. “In several areas, the risk of famine has increased, and scores of Somalis are on the brink of catastrophe. I am concerned that a huge number of people will starve to death unless we rapidly scale up the delivery of humanitarian assistance to those most affected.”

In February, the SHF allocated $25 million to mitigate the impacts of severe drought. About 836,000 people benefitted through multi-sectoral integrated interventions. The new allocation will focus on underserved, hard-to-reach areas and complements the $14 million Rapid Response grant from the UN Central Emergency Response Fund (CERF) that aims to address the worsening food crisis and multi-sectoral needs of communities severely affected by the drought.

Somalia is the most drought-impacted country in the Horn of Africa; at least 6.1 million people have been affected of whom 771,000 have abandoned their homes in search of water, food, and pasture. At least 1.5 million children are facing acute malnutrition, and over 3,170 AWD/cholera and 2,460 measles cases have been confirmed since January.

Despite increasing needs, the 2022 Somalia Humanitarian Response Plan, which seeks US$1.5 billion to assist 5.5 million people, has only received 18 per cent of required funding (nearly $260 million) as of 31 May.

“I thank the SHF and CERF for providing desperately needed resources but urge other partners and donors not to forget the people of Somalia,” said Mr. Abdelmoula. “We are running out of time. Unless we act now, we are likely to experience the worst outcomes in coming months.”