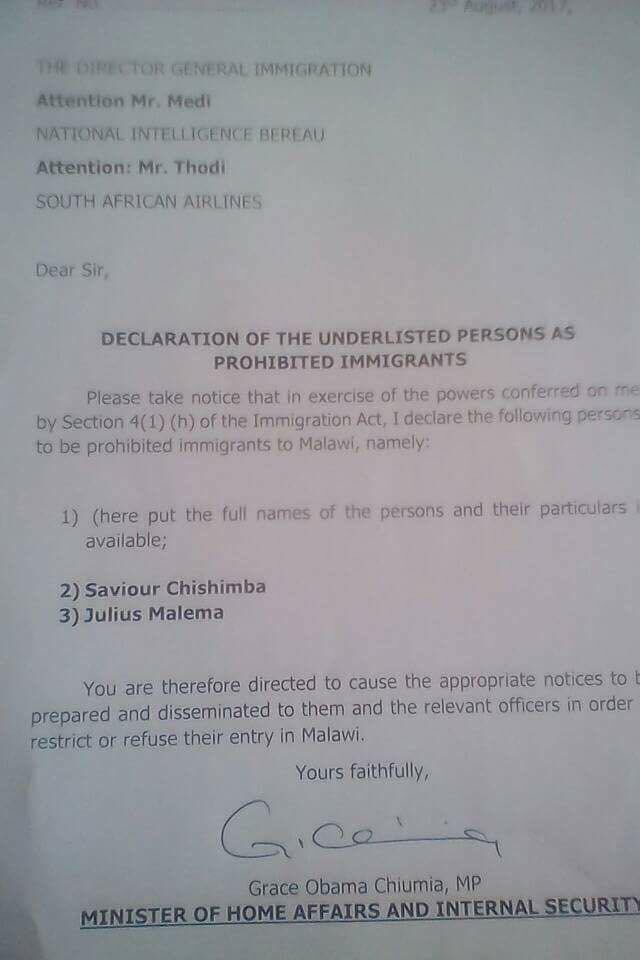 That the Transformation Alliance are planning to become a Political Party seems to stressful for the Republic of Malawi. This can be said, since the Ministry of Home Affairs and Internal Security, Hon. Grace Obama Chiumia ordered that two foreign speakers to a TA Conference we’re banned from the Republic. This is the Zambian politician Saviour Chishimba and the South African politician Julius Malema. TA must really upset the Democratic Progressive Party (DPP) and the President Peter Mutharika, who is struggling in with the Cash-Gate and the Maize-Scandal, that has run the Republic.

The Malawian ruling party and President Mutharika must fear the possible TA becoming a single political party instead of a political pressure group. Since the pressure group has enough power to get two foreign high-level politicians to its conference. They would question the corruption and the problematic institutions lacking procedures to secure food storage. Just take a look!

“BLANTYRE – Transformation Alliance (TA), a political pressure group, has announced that it has invited South African and Economic Freedom Fighters leader Julius Malema, and controversial Zambian politician Saviour Chishimba, to its first national conference end of August ahead of the 2019 elections” (…) “Chishimba is a darling to Malawians for being a whistle blower of the controversial maize deal between state grain trader, Agricultural Development and Marketing Corporation (Admarc), Zambia Cooperative Federation (ZCF), a government agency, and private company Kaloswe Commuter and Courier Ltd” (Kamanga, 2017).

“Civil Society Organizations (CSOs) have threatened to take action to force the ruling Democratic Progressive Party (DPP) pay back the money it received from councils and parastatals during the blue night fundraising dinner held at Kamuzu Palace. According to reports, DPP solicited money from Blantyre City Council (BCC), Mzuzu City Council (MCC) and Lilongwe Water Board (LWB) totalling K13.5 million. Gift Trapence: The reports sparked anger among CSOs who demanded that DPP must pay back the money it got from the institutions” (…) “As Civil Society Organizations we are not going to allow having that impunity and we are warning the ruling party it will return that money come rain come sunshine,” said Trapence. He further urged President Peter Mutharika not to allow party members to be “insulting” the citizenry when they demand answers on issues of national interest” (Bisani, 2017).

“Chakwera will join Julius Malema a well -known politician in South Africa, a firebrand agitator who is revered and disliked in equal measure as another speaker will be Zambia’s leader of United Party (UP), Saviour Chishimba and that he has already confirmed his attendance. TA spokesman, Leonard Chimbanga could not confirm or deny about Chakwera attending the conference late alone making a keynote address, but confirmed that the leader of opposition has been invited to attend the conference. “He has been invited since we share similar views on matters of national interests,” he said. Meanwhile, some officials within the alliance have told Nyasa Times that the pressure group is working on turning into a political party ahead of 2019 elections apart from working underground to forge an alliance with other political groupings including Malawi Congress Party (MCP) and Peoples Party (PP)” (Malawi Voice Reporter, 2017).

Clearly, the Malawian government are afraid of the TA. They fear what the opposition pressure group TA can gain from this conference. That is why they have banned the Zambian politician UP Chishimba and South African EFF Malema is barred from entering the country. This proves the problems Malawi government has with it’s opposition. Peace.