The campaigns for the October polls are starting in Tanzania. Nevertheless, don’t expect it to be free and fair. The Chama Cha Mapinduzi (CCM) is ruling and they control all parts of government. There are no part of it they don’t toy around with.

The President is the almighty, the greatest ever and mightiest person to ever grace the Republic. He is so great, that you know he will with a huge margin in the up-coming elections. The opposition will either be charged, arrested and detained. They cannot do press conferences, campaign rallies and promote their parties without getting a positive nudge from the authorities. If they say anything, then its sedation, against some sort of statute and they get into legal jeopardy.

President John Magufuli has ensured this mess. He rules supreme. His the second alternative to God. His Excellency is majestic, a royalty of sort and the next in line for Kingdom Come. That’s why he is his grace, the one who no one will dare to question or stand up too.

The President are not allowing statistics published unless it got his blessing. He cannot let the radios, newspapers and such broadcast or publish without writing the things they are supposed too. If they don’t they get suspended or temporary closed.

Magufuli knows all of this. He would like to enjoy the title, the grandeur, but not accept the challenge of the role. The President cannot manage criticism, that’s why his critics are getting into trouble. Magufuli are only able to use the state to his advantage and make it disadvantage for everyone opposing him.

The CCM will win this. The candidates of Chadema and Act Wazelendo will not beat it. They might get some MPs and some representatives, but not anything substantial. The CCM will not give up its power and strength. These other parties will not have chance. Not like the President will give that up.

We can soon await the bracelets for Zitto Kabwe and Tundu Lissu. Just like there are several of other MPs, leaders and activists who will behind bars. That’s why the whole election and polls in October 2020 are just a charade. To make it seem like a democracy, but in reality that is just for play.

If the President believed in it. The President and CCM has decided to make it impossible for anyone else. Don’t expect anything … other than this. This is just the reality.

This election and polls is already fixed. The CCM will win and its only by a random amount of numbers.

Magufuli owns the game… he decides, he signs it off and will be victor. Peace. 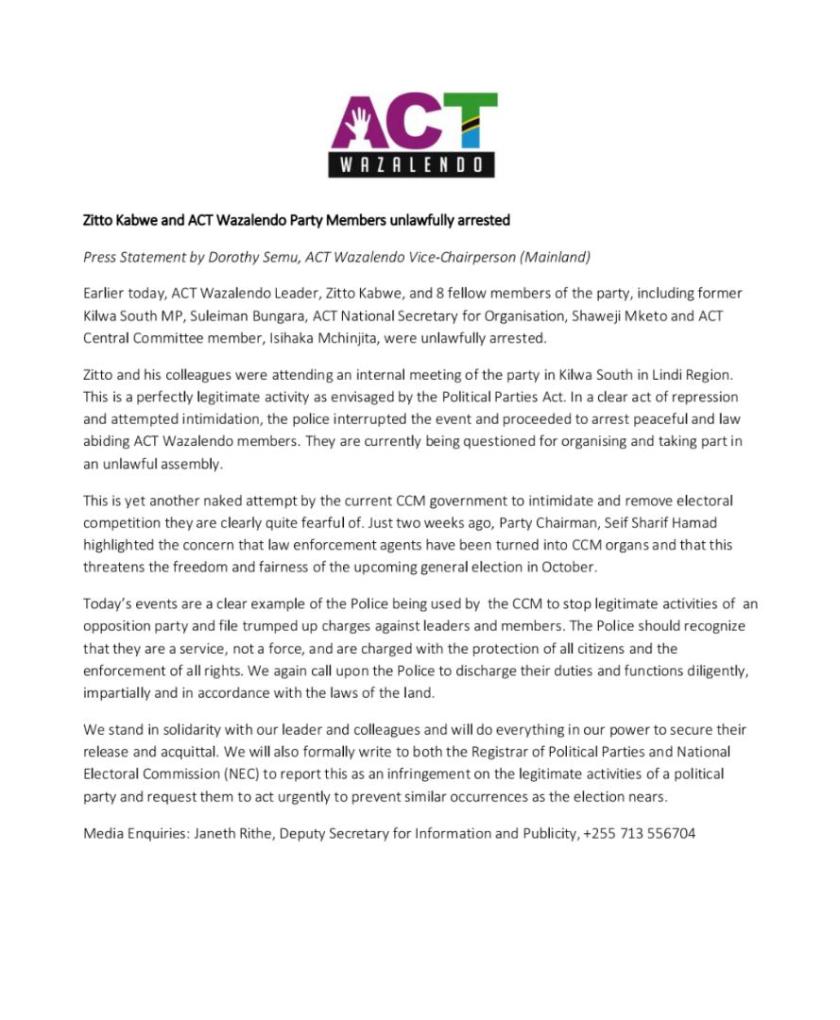 I wish you were right Mr. President. I wish the results was true, but your actions says otherwise. President Joseph Magufuli, its hard to trust you. When you have not published COVID-19 or Coronavirus results for over 5 weeks. At the same time there is revealed in Kenya and Uganda, that Tanzanian drivers are tested positive for it on the regular.

I have a hard time believing that it vanished into thin air. When you only prayed and didn’t do any social distancing, neither acted towards the spread of the virus. You have sleepwalked, you have walked blindly towards the future. The results was so dire the final days of releasing them. This is why I have a hard time it just went away.

When you keep numbers secret and doesn’t publish it. Who knows how bad it really is? I doubt it has gone away. It is more like the game of don’t find it, therefore it doesn’t exists. Or I am not testing for it or contact tracing it, therefore it’s not there. That is losing strategy, because in the end the public will spread it and the public will be positive with it. The results are shown with how many of the truck drivers are positive when they are crossing the borders. It is not like they got a hot minute before entering either Uganda or Kenya. But they had it already as they were passing the border-points.

Magufuli cannot run away from that. The Truck-Drivers are a sign of the failure of containing it. The President can be a coward and not be sincere about the situation. He can act like its not there. However, that doesn’t change the realities. The President knows this, but rather live by his own propaganda. Because its easier to live on a lie than actually do something useful. It costs less and you need manpower to achieve results.

We know that Magufuli lacks character and honour. He is a self-centred individual who needs love every single second of his life. There is not a moment where needs positive energy and vibes. The President needs kisses, hugs, attention and headlines of praise. If he doesn’t get that. His Excellency will go into a temper tantrum and the office will not look the same.

With this knowledge, it’s not strange that the Ministry of Health has stopped publishing their results. Since that hurts the pride and love-meter of the President. That breaks down the scale of love and makes the President walk on needles. The Minister and the directors cannot stomach that pressure and erratic behaviour. Therefore, its easier not to publish something and keep the public in the dark.

That is why to boost his own ego and megalomaniac tendencies he declared the United Republic of Tanzania “free for COVID-19 cases”. However, as long as Tanzanian Nationals are positive on the borders and border-points to neighbour Republics. You know there are stemming and even possible community spread in Tanzania. Not that I want more illness, but the science is very simple. The common sense is still common.

H.E. President Magufuli you can declare something, but that doesn’t make it true. It only make it obvious that you want to be dubious. This only shows your intention of keeping the world in darkness and you thinking your own population as fools. We can never know the truth, because you hid that from the world. However, drip drops of the reality crosses the borders every single day. That will undermine your message. Unless, you close the borders, which you never would do. We know that. You know that. That is why we are here and your continuing to live on a lie. Peace.

When President Joseph Magufuli of the United Republic of Tanzania says by prayer the nation has been healed of COVID-19 or the Coronavirus. We can be especially concerned not only by the share rate of Tanzanian truck-drivers testing positive at the border-points to Kenya, Uganda and Rwanda. However, with the share lack of data, proof and evidence of a setback of cases within the Republic as whole.

The President is living on a prayer and that’s dangerous. Even from a Christian perspective. It’s like he take the biblical principals halfway. Sort of the way he now also takes scientifically proven evidence too. That’s why he tests goats and other things.

In this manner, I will quote a passage from Letter of James Chapter 2: 14-19:

“What good is it, my brothers and sisters, if someone claims to have faith but has no deeds? Can such faith save them? Suppose a brother or a sister is without clothes and daily food. If one of you says to them, “Go in peace; keep warm and well fed,” but does nothing about their physical needs, what good is it? In the same way, faith by itself, if it is not accompanied by action, is dead. But someone will say, “You have faith; I have deeds.” Show me your faith without deeds, and I will show you my faith by my deeds. You believe that there is one God. Good! Even the demons believe that—and shudder” (New International Version).

This is the sort of scripture I think the President of Tanzania needs, as he acts of faith and trust in the greater God, but doesn’t act. He speaks of trust in God, the whole father of all creation, but doesn’t use his mind or his office to help the ones in need. Instead of using all means, everything he access and wealth of his office. His instead barricading and praying like a fool.

I pity the Tanzanian people, the citizens of Tanzania. That they have to trust in a Head of State. Whose busying praying and mysteriously hope a pandemic virus disappears. While his not using methods of testing, routing the groups of cases nor narrowing the spread by any means. He does have the power to do so. Yes, the numbers would spike first with mass testing. However, if they know the sources and can trace, than they can scientifically stop it. Unless, there is imported new cases and get a second wave.

Therefore, the President can claim faith, but he doesn’t have the deeds. His speaking of peace, keeping warm and being fed. However, he doesn’t ensure shelter, medicine nor treatment. His just hoping things vanish in thin-air. Hoping his faith is enough, which is half-baked approach at best.

Yes. Praying and sending good energy is a good thing. To have faith and believe is God. There is nothing wrong in that, but you should also act as a Christian. As a man of faith and serve the community your apart of and especially if your signalling yourself as a Christian leader. Than, you should act like one and not just talk, but actually do as well. That means not only praying, but behaving within your means.

When your a Head of State, you should use your means and actually serve the whole Republic. The President should do his deeds. Not only live on the prayer. That’s not cutting it, even the scripture disapproves. Peace. 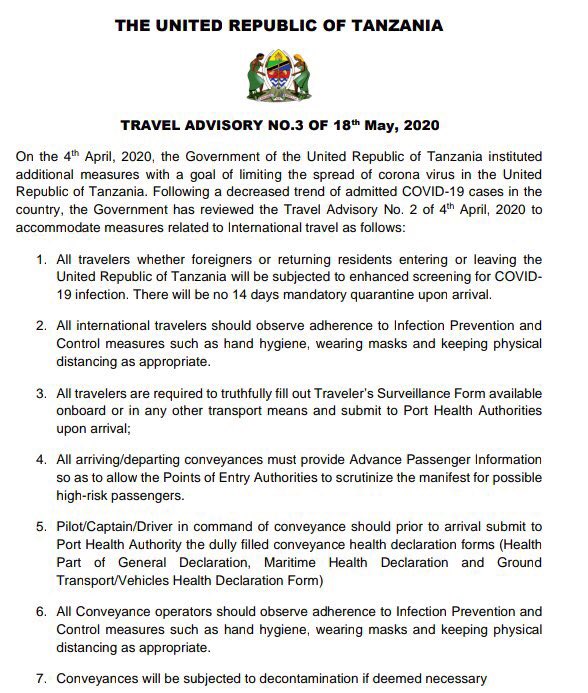 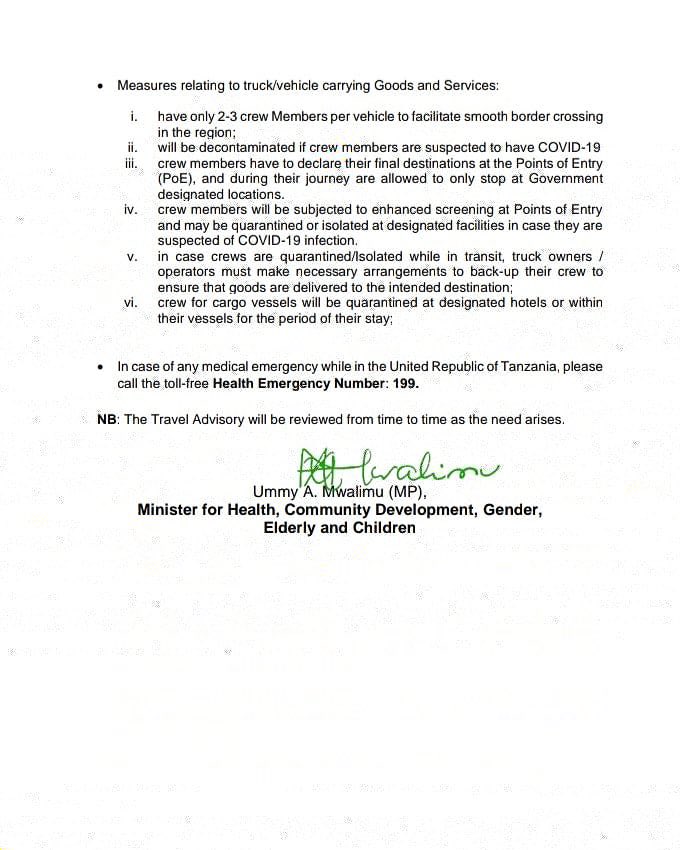