Archive for the tag “Academic Qualifications”

CCEDU claims the “electoral process was compromised” during the Kamuli By-Election! 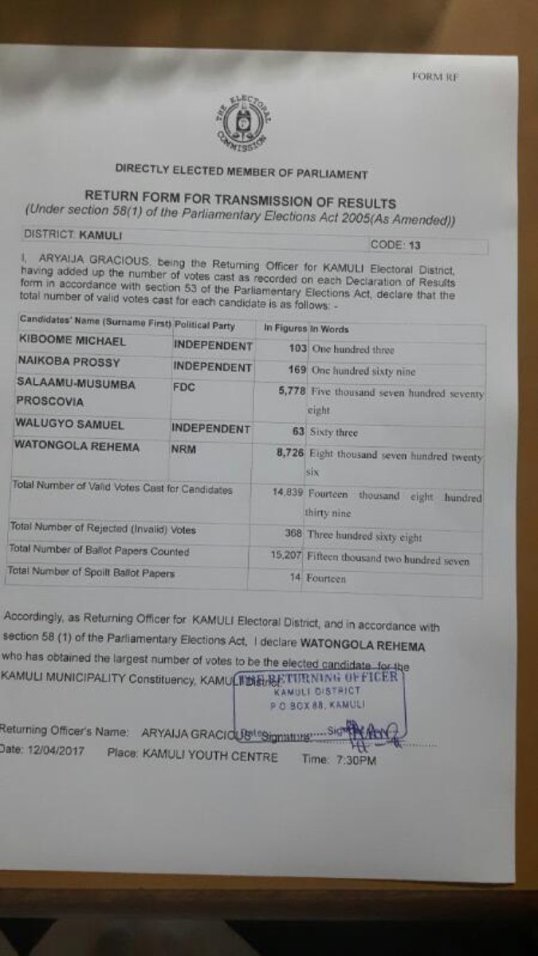 The recent by election in Kamuli district has gotten a lot of flack for their evident ways of transgression against honoring the ballot and liberty of all parties to take part. Especially the Forum for Democratic Change (FDC), as the National Resistance Movement (NRM) won the race, but the reality is that the win cannot be seen as honorable one, as the Kamuli District was more than one place found evidence of questionable behavior of the state.

“80% of Election Day officials had arrived at the polling stations by 6:30am, only 20% had not. It is important for polling day officials to arrive on time because then the polls start on time” (CCEDU, 2017). When the CCEDU finds out that 20% of the Officials not showing up at the polling stations, show the lack of integrity and wish to really care for the voters. Like there are not really any justification to explain the lacking tolerance of the voters, when the persons who are checking and securing the ballots doesn’t show up on time. When one in 5 doesn’t care for showing up when the polls start.

“77% of observers reported no intimidation, harassment or violence during voting against any other persons, but 3% observers reported intimidation of election officials, party agents and observers and 13% reported intimidation against voters” (CCEDU, 2017). That there was reports of this and the police force was involved was clear by many reports, not only by the FDC. THe intimidation was found by 13%, which is a giant group of voters. As one in 10 was intimidated during the election, something that shouldn’t need to happen as the ballots should be able to be casted in peace. The 3% of intimidation of election officials, party agents and observers, is also to much and proves the irregularities of these polling.

“CCEDU observers recorded a number of malpractices that were orchestrated by supporters of FDC and the NRM. At about 12:00pm there were allegations of voter bribery, by an agent of Hajjati Wetongola at St Mark Primary School. The election was also characterized by incidents of violence and a voter wanting to vote in the name of another person. However, our Observer at Kyabazinga Senior Secondary Polling Station, was able to notice the anomaly and raised it with the authorities, who arrested the young man before he would vote as John Mawanga. All these issues mean the quality of  the electoral process was compromised. CCEDU was also concerned about the high number of unauthorized persons within the polling stations and noted that quiet a number of people were denied a chance to vote. The Kamuli by-election registered a voter turn-out of 51%. On the whole, the general management of the process was commendable with all polling stations commencing voting before 8:00am. It is also commendable that increasingly, more party agents are observing the electoral processes from beginning to end. Party agents have the ability to promote the integrity of electoral processes by raising a red flag on electoral ills” (CCEDU, 2017).
So a compromised electoral process isn’t what the Kamuli District deserves, neither the voters, as the incidents from both FDC and NRM in this sort of affair wasn’t justified, even as the Ruling Party was the Main denominator together with the Security Organizations, like the Police and Special Forces Command. That shouldn’t be needed during an election, when the public should expect something else. They should expect that the government facilitate the election without any intimidation and any sort of acts against the FDC. They shouldn’t have to go this far for a victory, but they did, because they do not know how to win without using force. Peace. 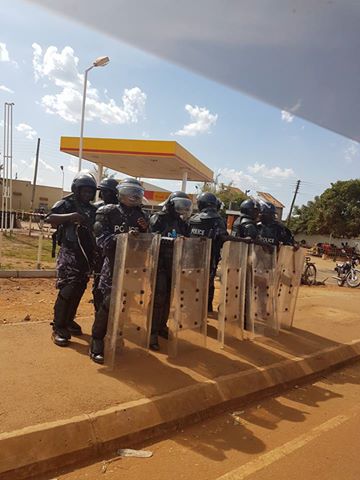 The Kamuli by-election today has been marred with Police being besides men who give away 2,000 shillings to the ones going to the polls. The Police Force has created chaos in and around the Polling stations as the voters are targeted to be bribed, as well as the National Resistance Movement (NRM) has even at some polling stations tried to campaign at the booth.

The proof of neglect of honest campaigning came after the Forum for Democratic Change (FDC) candidate Proscovia Salaamu-Musumba we’re arrested right after she cast her vote. This is the proof of how malicious and little caring about the justice and honoring the ballot.

Because the Police Force has already been on the tail and securing the NRM cars driving around and giving away bribes to the public. Also Hon. Francis Gonahasa and Kasiono Waddiri has also been arrested by the Police during the election in the district. So the Police are really targeting the FDC and their leaders. As they are claiming and seeming justified voting bribery that is going on.

Just as of yesterday, the NRM and the Police was clearly making sure the result would go in their favor as the Armed Personnel Vehicles of the Police came in the numbers of 16. To make sure the district would be controlled by the NRM. So if Rehema Wetangola wins this race, it is not on her merit, but on the rigging machinery of the NRM.

The reason for today’s exercise:
“The President was addressing NRM supporters yesterday as he campaigned for the NRM’s flag bearer, Hajat Rehema Watongola at Kamuli district headquarters in Kamuli Municipa Parliamentary by-elections. The by-election followed the nullification of Rehema Watongola’s 2016 victory on the premise of lack of academic qualifications by the Court of Appeal. In a petition filed by FDC’s Salaamu Musumba, court heard that Watongola did not possess the required minimum qualification to contest for a parliamentary seat” (Museveni Neera, 11.04.2017).

So even if the Courts says the NRM candidate does have the qualification needed by law, she is still running for the second time on the same merit, as her new qualification has been showed to world as her husbands education. Therefore, the rigging is already administrative and not only by buying the ballots in the sub-counties of Kamuli. The NRM cannot at this stage win an honest election it seems.

The reality is that the car of the FDC candidate was also thrown stone on. So the NRM has done everything in their power to undermine the opposition candidate and her candidacy, as the election has been marred with issues, instead of being peaceful exercise. All of these reports proves that the NRM has no interest in the will of the people, but more the will of the Police. Peace.