Archive for the tag “Abdelkader Bensalah”

Algeria: The Invisible President is Out, Interim Appointed, but who will really succeed him? 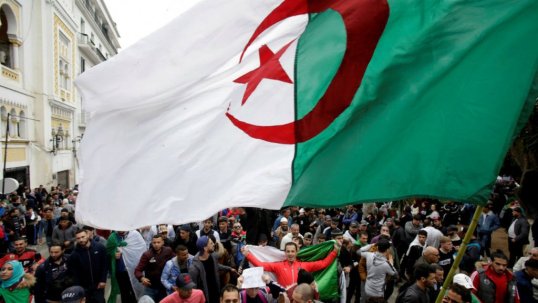 Abdelkader Bensalah, the newly appointed Interim President of Algeria after the 20 year long reign of Abdelaziz Bouteflika. Bensalah is not a rookie, he is a vital part of the regime, whose been running the Republic. His not a new figure, as he has been the President of the Senate and therefore, isn’t a reforming figure or someone who really ushers in change.

Even if the Parliament have appointed him the successor of Bouteflika, that doesn’t mean the public nor the demonstrators are accepting this fate. As they will not feel that this is enough. This is just switching one similar head with another. There will be no significant change with Bensalah as President.

They have gotten rid of the President that was trying to surf into a fifth term, Bouteflika, but his party and his cronies are still lingering in power. The same army officials and the ones, whose intent of changing leadership. Means they are losing their wealth and credentials, which they cannot risk to lose at time.

By law, Bensalah can only be in power for 90 days. We will see if his the pawn for Noureddine Bedoui, whose the current Prime Minister. Who two days ago nominated his cabinet after the President stepped down only 7 days ago.

Therefore, this is happening fast, but expect the party of Bouteflika and the army to configure the basics. As they are trying to find their way for a “change” that is only on paper, but maybe not in reality. A new possible head, but no particular change or reforms for the public to see.

This would be with the leadership of Bedoui or even Vice Prime Minister Ramtane Lamamra. Both of them could be scheming something behind the scenes. That is why they are getting rid of Benesalah, as he cannot by law or the constitution run for office. An only lead the Republic for 90 days.

That is why it seems like they are working behind the scenes to usher in some of the strong-men and secure the foundations made. Not ensure the voices of the streets or the ones who stood up in the revolution to get rid of Bouteflika. However, the same people still have the same party and state machinery behind him.

Let’s see how this goes, but don’t expect the army nor the state machinery to change, even with a Invisible President Bouteflika out of the picture. There is no change with Benesalah, significantly it wouldn’t be much change with Bedoui or Lamara. They are all part of the same structure and leadership.

We just have to see, if the revolution get rid of the party or if it just gives way from one tyrant to the next. We can hope not, but we have seen this elsewhere. You get if rid of known predator, but get another one. Peace. 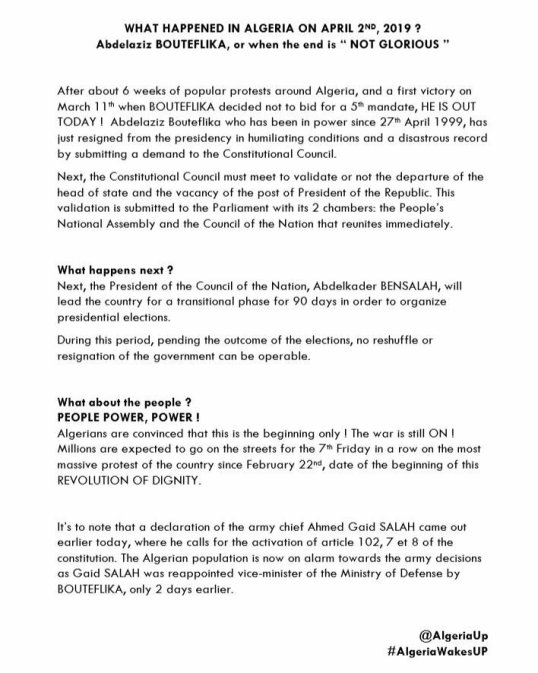