The already serious humanitarian situation in Central African Republic (CAR) has worsened amid a spike in violence which threatens to overtake almost every area of the country, a top UN aid official said on Monday.

NEW YORK, United States of America, May 29, 2018 –  One in four people has been displaced, according to Najat Rochdi, UN Humanitarian Coordinator for CAR, who said that this included areas that were formerly peaceful, such as the north and central zones.

Speaking at a press conference in Geneva, Ms. Rochdi warned that severe acute malnutrition in six administrative regions is higher than 15 per cent – the emergency threshold – and infant mortality is at 18 per cent.

And amid severe funding shortages which have meant aid cut-backs, she told journalists in French: “It breaks my heart every time a child comes to me and says I’m hungry.”

Speaking later in English, she said: “Where you have kids, those little girls and little boys coming to you and looking at you and telling, ‘I’m hungry, I’m starving,’ it’s horrible, really horrible. Unfortunately the situation has worsened because we had in one year’s time an increase of 70 per cent of the internally displaced people. Meaning more children, more little girls and more little boys, meaning also that it’s a whole generation that is sacrificed because they are not going to school.”

Of the more than $515 million aid requirement needed in CAR for 1.9 million people, less than 20 per cent has been provided so far this year.

Fighting between the mostly Christian anti-Balaka militia and the mainly Muslim Séléka rebel coalition has plunged the CAR into civil conflict since 2012. A peace agreement was reached in January 2013, but rebels seized the capital, Bangui, in March of that year, forcing President François Bozizé to flee.

Concerned with the security, humanitarian, human rights and political crisis in the CAR and its regional implications, the Security Council authorized the deployment of a UN stabilization mission, known by its French acronym, MINUSCA, in 2014 with the protection of civilians as its utmost priority.

The humanitarian community distributed high-energy biscuits to 1,500 children and debilitated adults who suffered from starvation and thirst for more than 72 hours during an outbreak of violence in Mbomou Prefecture, Central African Republic in May 2017.

The country’s huge natural wealth – in the form of diamonds, gold and uranium – continues to fuel the fighting, Ms. Rochdi explained, adding that there was “absolutely no problem” in areas “where you don’t have that much to steal.”

The violence reached the capital, Bangui, at the beginning of the month after almost a year of relative stability.

In that incident, 70 people were killed in clashes between security forces and armed militia, and thousands were displaced.

Ms. Rochdi said that UN troops had to intervene after Muslims were denied healthcare access.

The town of Bambari has also seen armed groups return, despite becoming a “safe haven for all communities” since last year, the UN official added.

The militia aimed to put pressure on the government to grant them an amnesty but this would be a “disaster” for the country, Ms. Rochdi insisted, before adding that efforts to prevent impunity had been stepped up and had resulted in a Special Criminal Court, which is due to start work in CAR next week.

Some of its “first clients” would be “high-profile leaders of armed groups,” Ms. Rochdi said, adding that CAR was one of the most dangerous places on earth for humanitarians, with six people killed this year and attacks on aid workers and looting happening on a “regular” basis.

Yet despite the instability and fact that funding levels in 2017 were only 40 per cent of what was requested, she maintained that it still made a substantial difference on the ground and had helped to prepare communities to withstand future shocks too.

It meant that more than one million people had access to water, that 7,000 tonnes of humanitarian assistance were delivered and more than 60,000 children were given an education.

In addition, the aid ensured that more than 70,000 farming families received a vital seed allocation, helping them to become more self-sufficient.

More than 17,000 children from six to 59 months suffering from severe acute malnutrition were also given support.

The most important thing was that the people of CAR had some sense that they had a future, Mrs Rochdi said, adding that humanitarian assistance “is making the difference between life and death”.

Aid is also “the best way for all of us to sustain peace in CAR”, she added, since the funding gave communities hope.

Joint Communiqué of the African Union and the United Nations on the Peace Process and the Situation in Bangui:

We are pleased in this regard that our visit coincides with the first meeting in Bangui of the International Support Group for CAR since the country’s return to constitutional order. During our visit, we will have the opportunity to talk with the Central African authorities, and have also held talks with President Touadéra.

Having arrived yesterday, we are also concerned about persistent tensions in the PK5 neighbourhood of Bangui. The operations conducted by the Government and MINUSCA on 8 April were aimed at putting an end to the activities of criminal elements that endanger the lives of peaceful citizens, in a neighbourhood that is also the economic hub of Bangui.

In these difficult times, we wish to express our deepest condolences to the families of the victims and we deplore the many wounded, to whom we wish a speedy recovery.

Above all, we wish to emphasize that this operation to restore order and State authority has the sole purpose to protect the people who seek our protection against the criminal elements who oppress them. We want to make it clear that we are determined to act to protect the entire population, across the country.

We strongly deplore and condemn the attempts to instrumentalise this operation, as well as the attacks perpetrated against peacekeepers, about 20 of whom have been wounded, and one who succumbed to his wounds.

We would like to remind you that any attack against peacekeepers is a war crime. Their authors and those who support them will certainly have to answer for their crimes in court.

We also wish to express that an offer of a peaceful settlement had previously been made to the targeted groups, who rejected it.

Finally, we wish to emphasize that, in close coordination with the Government of the Central African Republic, we are ready to use all means available to the international community to create conditions for the restoration of peace in CAR. Among these means, dialogue will be our first action followed by, if necessary, the use of force.

Our joint presence here, in collaboration with the Central African Government, is intended to reaffirm our unambiguous commitment to the African Initiative for Peace and Reconciliation in CAR, which, as the United Nations Security Council has stated, represents the only way forward to exit from crisis.

To the people of Bangui, we also call for calm. We ask them not to be victim to rumours and manipulation. Your authorities are working hard with MINUSCA to restore public order and ensure the protection of all civilian populations, without distinction.

The Office of Internal Oversight Services has concluded its investigative process on the allegations ‎of sexual exploitation and abuse against Burundian and Gabonese contingents deployed in Dekoa, Kemo prefecture, in the Central African Republic.

These allegations referred to incidents between 2014 and 2015. OIOS has conducted joint investigations with Burundian and Gabonese national investigative officers. Investigations started in April 2016, a few days after the allegations were brought to the attention of the United Nations and lasted for more than four months. The investigators relied primarily on the testimony of possible victims and witnesses given the lack of medical, forensic or any other physical evidence. This was due to the fact that the majority of the allegations referred to incidents that took place a year or more earlier. Everyone who came forward with claims, both minors and adults, were assisted by national and international partners.

The United Nations has shared the OIOS report with both Member States, including the names of the identified alleged perpetrators and has requested for appropriate judicial actions to ensure criminal accountability.

Responsibility for further investigations lies with Burundi and Gabon. The United Nations has requested from the Burundian and Gabonese authorities that they review the OIOS findings and conduct the interviews of the alleged perpetrators who had all been rotated out from Central African Republic before the allegations surfaced. The United Nations has asked for a copy of the final national investigation reports to be transmitted urgently.
‎
The alleged perpetrators, if allegations against them are substantiated, and, if warranted, their commanding officers, will not be accepted again for deployment in peacekeeping operations.

MINUSCA has strengthened its prevention measures and reinforced its outreach among communities and peacekeepers across the country, especially in high-risk areas to improve awareness and reporting on sexual exploitation and abuse and other forms of misconduct. The Mission is also regularly monitoring conditions and behaviour of mission’s personnel and has partnered with United Nations agencies and implementing partners in Central African Republic that provide psychosocial, medical and legal assistance to victims of sexual exploitation and abuse.

The United Nations condemns, in the strongest terms, all acts of sexual exploitation and abuse committed by peacekeepers or any other UN personnel and will maintain follow up so that perpetrators of these abhorrent acts are brought to justice. 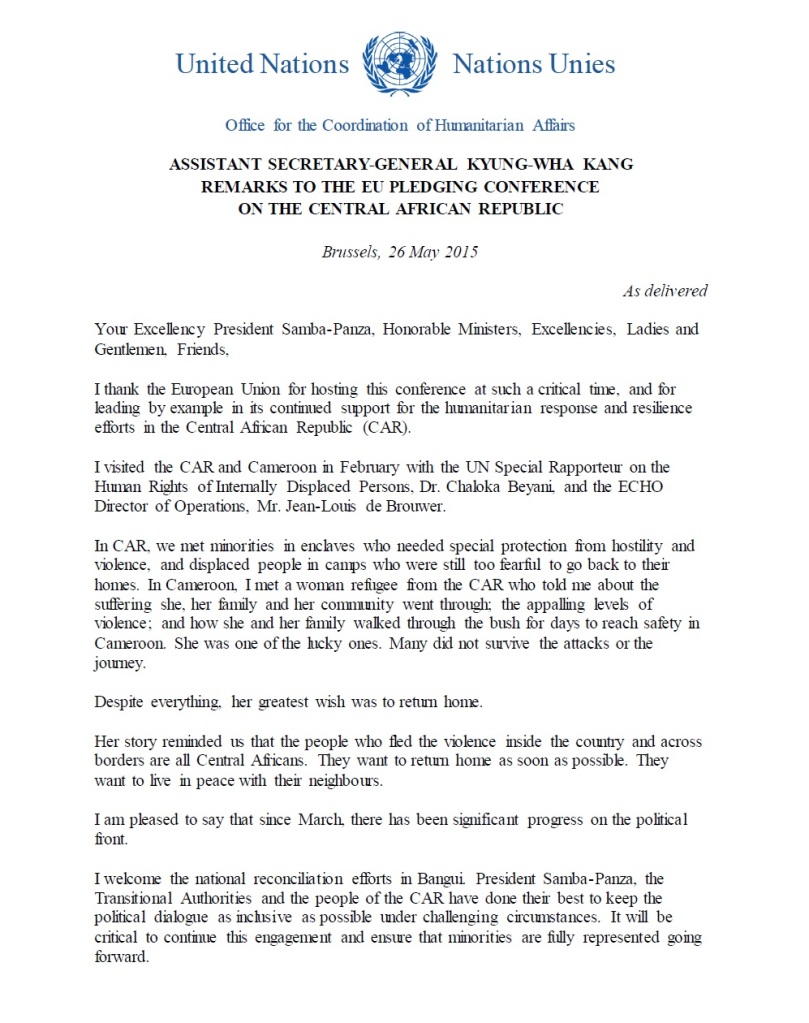