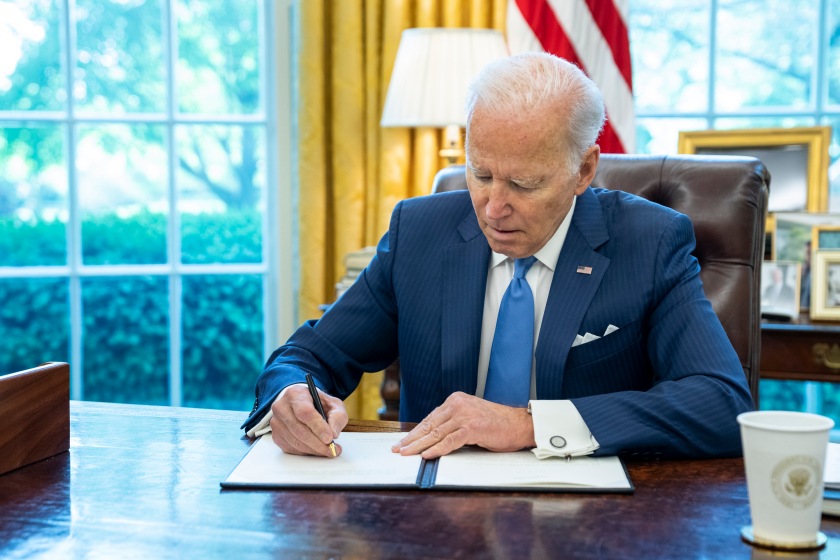 “The Justice Department today released the following statement from spokesman Anthony Coley regarding the President’s proclamation granting a full, complete, and unconditional pardon to U.S. citizens and lawful permanent residents who have committed, or been convicted of, the offense of simple possession of marijuana in violation of the Controlled Substances Act, as currently codified at 21 U.S.C. 844 and as previously codified elsewhere in the U.S. Code, or in violation of D.C. Code 48–904.01(d)(1): “The Justice Department will expeditiously administer the President’s proclamation, which pardons individuals who engaged in simple possession of marijuana, restoring political, civil, and other rights to those convicted of that offense. In coming days, the Office of the Pardon Attorney will begin implementing a process to provide impacted individuals with certificates of pardon. “Also, in accordance with the President’s directive, Justice Department officials will work with our colleagues at the Department of Health and Human Services as they launch a scientific review of how marijuana is scheduled under federal law.”” (Justice Department – ‘Justice Department Statement on President’s Announcements Regarding Simple Possession of Marijuana’ 06.10.2022).

Things are moving and we should expect things to change with time. The pardons of possession of marijuana are only the beginning. The rescheduling of marijuana is really a beginning for Federal Law Enforcement to see it differently.

This move is most likely in the realm of legalizing and ending the prohibition of the substance. Marijuana goes into the legal position of alcohol and tobacco. We shouldn’t be shocked by this. Because this is creating not only new support for the President. Biden is becoming a hero for doing this federally if he pursuits it. However, time will tell if the Federal Government does more.

Now, the Federal Government is on the one of legalizing. That means the trading, the usage and everything in connection to the substance will be regulated, which means a new tax-base. That can mean the state will find new ways to monetize and ensure growing revenue from marijuana products. It won’t only be the sale of blunts, the chronic and others, but also medicinal marijuana. That’s where this is going.

If this goes like the most liberals want. This could be sold side-by-side of tobacco. It could be like prepared smokes or blunts of marijuana in the stores. That would be taxed and be a big business. It would be no difference from tobacco or alcohol. This will affect society, but that does all the things mentioned.

The pardons is only the beginning this will challenge the ones who calls it a “gateway” drug. It will also be a battleground points of the Republic Party. Alas, they are one the wrong side of the popularity here. The ganja, the chronic and everything associated with it is very popular. It is a substance that the United States population is ready for and to make acceptable with other recreative activities like drinking and smoking. It just follows that one and seems to be getting the acceptance of it.

The smell of weed will now be familiarized and the possession of it too. There will less fear and sooner or later it’s a accepted business and taxed too. It will benefit the Republic monetarily. Though we cannot know the consequences of it or how it will change society. It is a watershed moment yesterday. The announcement wasn’t expected and certainly there will be ramifications to this.