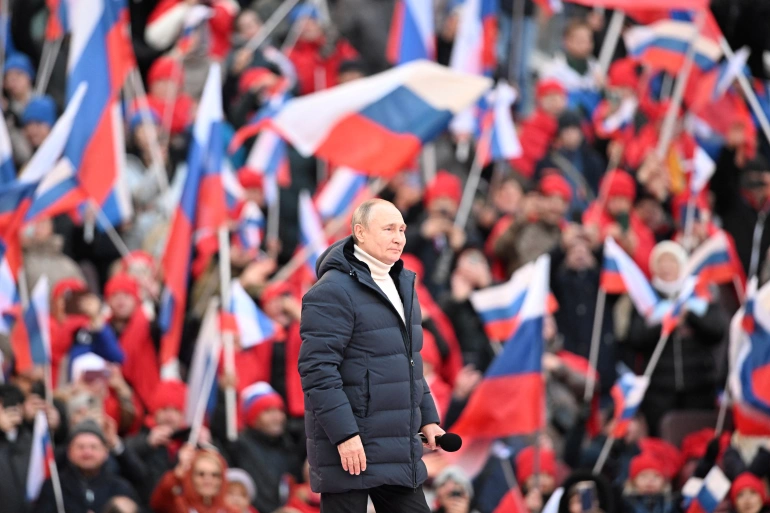 “Why did the Bolsheviks need to generously encourage any nationalist ambitions on the imperial periphery? Handing over territories and the population of historical Russia… the nationalists didn’t even dream of this. Ukraine has never had traditions of its own statehood… the Ukrainian state is built on denying everything that invites us, the historical memory of millions of people” (…) “Maidan did not bring democracy to Ukraine… after eight years the country is divided, Ukraine is living through a severe economic and social crisis. 15% of the population had to leave the country for work, usually for non-skilled labor” – President Vladimir Putin (21.02.2022).

I don’t know what is happening in Moscow, but President Vladimir Putin seems to have a change of heart. I have hard time believing it, but it is from official sources and been published from a speech today. It is only mere months ago in February 2022 that he launched the invasion and said Ukraine lacked statehood.

Now in early October and the Ukrainian Forces are advancing. As the annexation of territories are only done on paper. While the might Russian army are losing and lack moral. The mass mobilization is backfiring too. The Russians population in the right age have been fleeing and trying to get to safe pastures. Therefore, the speech is a way of suddenly showing solidarity, but I am not buying it.

Just read these few paragraphs of it:

“There will be a separate plan for assistance to Donbass, Zaporozhye, and Kherson, of course. I already said this in my opening speech. It should be comprehensive, it should be combined not only with the development of infrastructure, which is obvious. The same also applies to sports infrastructure and medical care” (…) “Despite the current tragedy we have always had great respect for the Ukrainian people, Ukrainian culture, Ukrainian language and literature, and so on. And we have never permitted anything that is allowed in Ukraine in relation to Russian culture and the Russian language” (…) “We have three million Russian citizens of Ukrainian origin. We do not make any distinctions and are not going to make any distinctions between Russians and Ukrainians, but, while proceeding along our own constructive way, without any doubt, we will brush off everything that prevents us from moving forward. It is very important to arrange for the educational process in a way that has always been Russia’s pride and will remain so in the future” (Putin, 05.10.2022).

It is hard to believe that the same man in his War-Cry in February said Ukraine didn’t have culture or a statehood. He said it was a Bolsheviks mistake. Now, he says despite the current tragedy, that Russia has always had respect for Ukrainian people and their culture. That’s so out of touch with the messaging ahead of the 3 day war he launched months ago.

This shows that his sentiment has changed, because the reports from the front-lines are grim. The Russian army isn’t winning and he cannot even keep up with the realities on the ground. That’s why his losing steam and has to change his ways. Suddenly, he has to make it look it was friendly fire. When we have seen the massacres, torture and blind disregard for Ukrainians in general. We cannot forget Bucha or anywhere else where they found mass-graves, torture chambers and other facilities made in the occupied areas, which Russia resided just a while ago.

I cannot forget what he said in February that lingers on in my mind. That’s why the speech today about suddenly respecting Ukraine isn’t believable. It doesn’t feel legit or sincere. Only a way of words, because his armies are losing in Ukraine. If Russia was winning and gaining grounds. If Russia was terrorizing and brutalizing Ukraine. He would have boosted his own ego and not changed tune.

That’s why I don’t trust this Putin. President Putin doesn’t seem fair here. It seems just so coincidental that he says this now. After all the months, reports and addresses he has held. Putin knows what he has done and ordered. Therefore, these words aren’t a change of heart, but a way to make amends. Do I believe them? No, are these words intended for me? No. However, his still a bloodthirsty tyrant and if he had his way. He would have annihilated Ukraine as we know it. Peace.