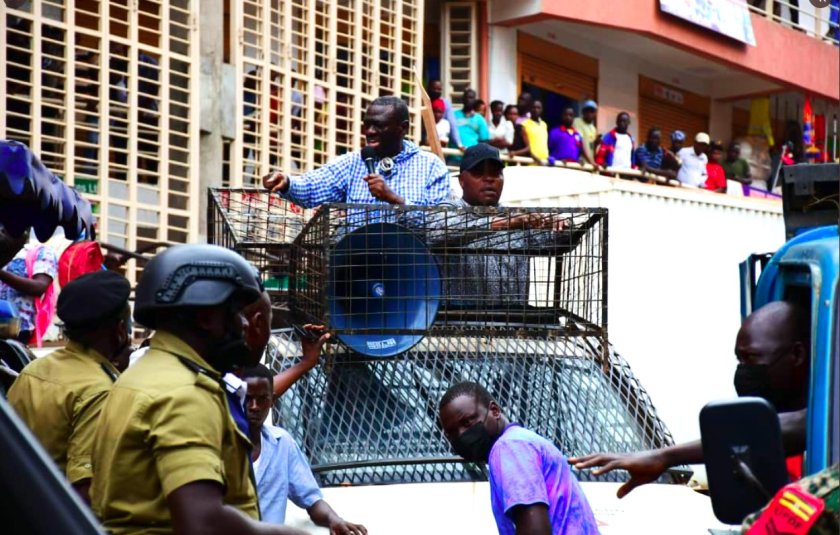 “We are appealing against the Shs30m bail for Dr Kizza Besigye and court asked us to make our submissions on Monday. Besigye has not killed anyone but he is in Luzira for standing on behalf of Ugandans – Lord Mayor Erias Lukwago” (88.7 Kioga FM Amolatar, 28.05.2022).

“Dr. Kizza Besigye through his lawyers led by Erias Lukwago filed an application in the High court contesting the 30 Million shillings cash bail he was ordered to pay as bail by grade one magistrate Siena Owomugisha” (See TV Uganda, 26.05.2022).

What Dr. Kizza Besigye is facing as he await further trials and charges, as of the courts and judges are aware. His just appearing relentless and continuing to fight on the streets and with the people for causes of which is of importance to them. Alas, people are maybe not following him, out of fear or intimidation. If not, they are afraid to be caught up in the system and have nobody to “bail them out”. That’s why his often alone or not having huge crowds suddenly attending his campaigns. Because, they are afraid of losing their freedom and possible livelihoods.

Besigye has fought the commodity prices before… he did the same in the Walk to Work protest. The Activists for Change (A4C) and “W2W” was a huge protest and riots, which inflicted much harm on the government. In such a fashion, that the laws for gathering, demonstrating and public assembly has changed. That’s why the rigid Public Order Management Act (POMA) came into law and has an affect.

The “Wake-Up Call” Campaign has maybe not transpired or inflicted any real danger to society or reached it’s objectives. As Besigye and only a handful is participating. While his left alone to rot in prison. Where his awaiting further judgement in Luzira. As the greater public is awaiting and seeing what is happening.

That Besigye has been arrested thousands of times, detained hundreds of days and been monitored by state haven’t stopped. It just a continuing and never ending. That’s why his just arrested on the regular and never really compensated. Because, it’s all political and not criminal. It is a way of quelling and silencing a voice of the people, because they fear that he could incite a revolution or a people’s protest, which haven’t been seen before.

Though the last time he was able to do so was a decade ago. The authorities have done whatever they can to stifle him and it’s evident. He has used People’s Government and now the Red Card Front to fight for the causes and collectively. Nevertheless, it hasn’t always bear fruits…

Now… his behind bars fighting for a just cause with a negative and huge bill for his liberty. He has lost his freedom and rights to protest countless of times. Besigye is a symbol and a resilient man fighting for justice. No matter how much injustice and impunity himself is shown. His now lingering in jail, as the system is putting a huge bill on his liberty. The price of the bond is just showing how they are targeting him.

Besigye has fought forever… and he seems never to win. He is trying to fight for what is right. A man of this stature is never alone, but it is a never ending story.

That’s why this isn’t the first or possibly the last time his in Luzira. Just like he has been in nearly all possible prisons of the Republic. That’s all for the political choices he has made and also fighting for the people.

People shouldn’t forget that and they should stand by his side. Because, he has no trouble standing on the curb with them and on the front-line, as he see the authorities and the state brutally taking them away. While they are fighting for justice in the middle of the oppressive dictatorship. Peace.