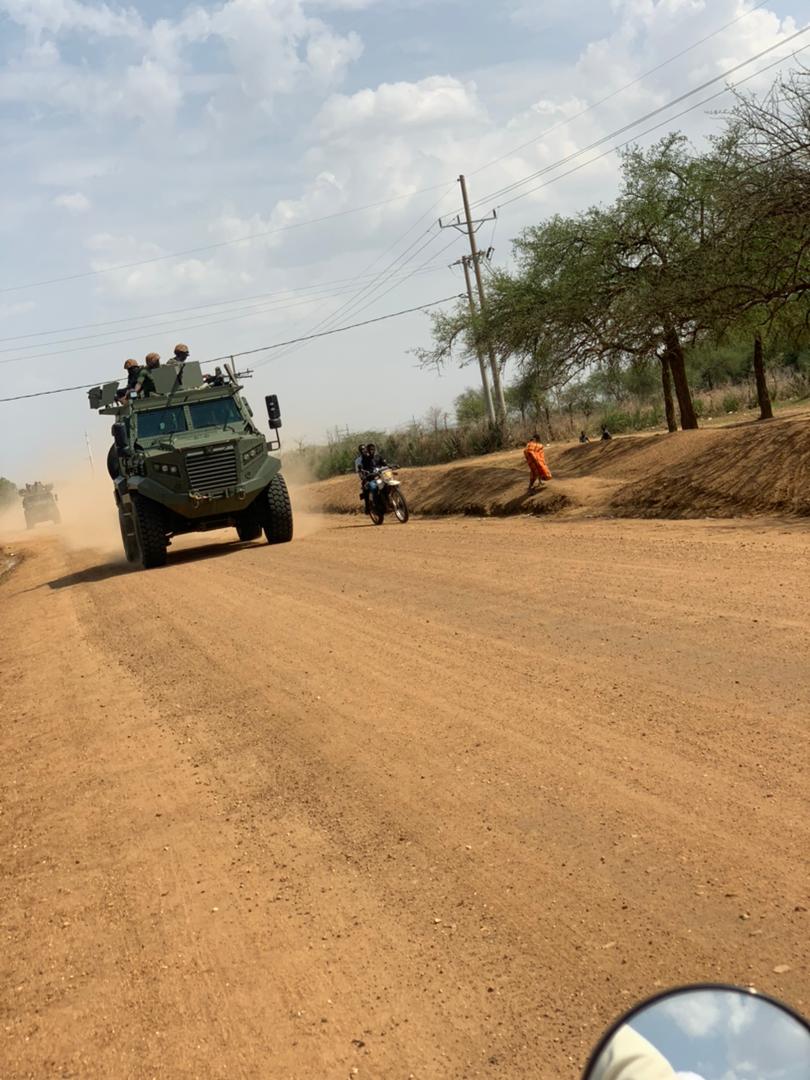 “A total of 17,083 square kilometers of land in Karamoja is licensed for mineral exploration and extraction activities, according to official data. Twenty-six companies currently have exploratory or mining rights in the region. In 2018, Chinese mining company Sunbelt was given 3.3 square kilometers of land to set up a $13 million dollar marble mining factory in Rupa sub-county. A year later, the company expanded its operations to cover an additional 4.1 square kilometers, ostensibly after a deal with local leaders. Hundreds of families have since been pushed out of their ancestral homes, local officials say. Locals accuse Rupa Community development trust, a community trustee group created three years ago, of conniving with investors to steal their land” (Diana Taremwa Karakire – ‘Mining Rush Threatens Indigenous Peoples in Karamoja, Uganda’ 01.09.2021).

What I feared the most seems to be reason for the joint operation of the Uganda Police Force (UPF) and Uganda People’s Defence Force (UDPF) in the Karamoja sub-region. Which is an continues operation and it is persisting. The state is even furthering it’s investments into it by deploying 6,000 Local Defence Units or LDUs in Karamjoa. Therefore, the burning and bleeding will persist for a long time.

The lack of accountability and transparency is very clear. The obvious reasons for that is the licensed land and territories given to mineral extraction corporation over the indigenous people. The people and the citizens are neglected. They are perpetrators and the unlawful one in the mind of the state, but not by their rights as people.

The Government and the Authorities are coming in as a colonial government. They are occupying and violently removing people. The state is blaming the cattle rustling, but it is obviously more too it. Because, it is not like the government would create so much and damage over some livestock. However, it would do so over the mineral extraction and possible gold-rush in Karamoja.

We know they have given this state operation the name of “Usalama Kwa Wote” to disarm and take away illegal guns, but I wouldn’t be shocked if it was an alternate motive. A cash enterprise and a possible profit objective of the state. As they know the values of the land and what it possesses. When knowing that… they might find it easier to scare people away and not take ownership of land. Make them displaced and ensure their fear to return. As the mineral exploration and exploitation can start. In such a manner, that the government and the companies can start their trading.

The unfortunate families, villages and the Karimojong is just dying. While they are defending their land and we don’t have any idea about the amount of fatalities. As the GoU, the State House and UPDF doesn’t release any sort of update on their Joint Operation there. Only in the beginning and stopped when the public outcry ceased to exist.

The Karamoja sub-region continues to burn, be looted and is destroyed by government entities. While they are blaming old cultural factors and blaming the herders. That just shows their sinister motives. Because, we are not supposed to know about the vast licensing agreements and the planned mineral exploitation, which has been sanctioned without the concern of the locals or the Karimojong in general. They just have to accept the loss of land, livelihood and where they have lived for generations.

Because, that is the “steady progress” and “securing your future” means for Karamoja these days. The state don’t mind violating or destroying, as long as it has a prosperous future ahead of it. Peace.