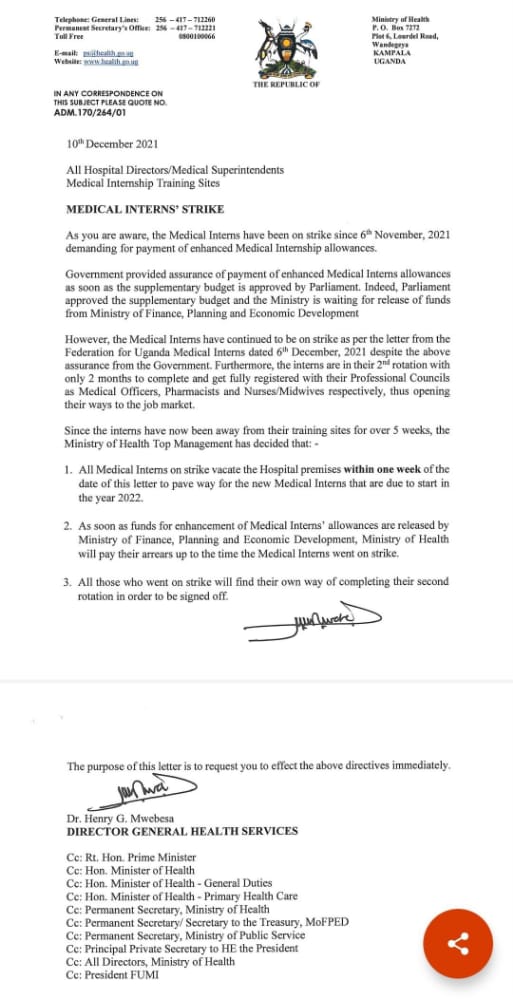 This is what empty promises and sending love letters between the bureaucratic institutions. The state and the government have promised a relief and added salary for the medical interns. This is going back to the first strike this year in June 2021 and the promises of the President and his letter to the Ministry of Finance and Planning, Economic Development (MoFPED) in July 2021.

Now, we are in mid-December 2021 and nothing has happened. The Federation for Uganda Medical Interns (FUMI) have rights to fight for their members and for the ones who is on the front-line. For a President who defends and wants to pay scientists. It is really weak that he cannot find the funds or allocate funds to fix this. Alas, this isn’t an priority.

That’s why on the 10th December 2021 the Ministry of Health has sent out an letter and said the medical interns can be evicted and vacate the Hospitals within a week to pave way for new ones in January 2022. This shows that the state was never interested in paying a fair salary and the covering their basic needs. As these are the future of the Ministry of Health and the ones who can become the Health Care professionals the MoH needs.

This government clearly doesn’t care about the Ministry of Health or the ones working there. They don’t prioritize it or have any concerns, because there is always an Non-Governmental Organization or United Nations Organizations covering the shortfalls. If not, the high ranking officials is taking trips abroad to get healing. The medical tourism of the big-men and the patronage is the reason for not valuing the hospitals and health centres.

When the President knows perfectly well the problems. He has even written a letter directing the MoFPED in July 2021. There is all the reasons to listen to the grievances and needs of the medical interns. This is if the government or the National Resistance Movement (NRM) even values the scientists or the ones who combat a pandemic. The NRM thinks they can assault and silence the ones who cannot even feed themselves.

On the 10th December 2021, the same day as the MoH went after the Medical Interns. “The Uganda Dental Association (UDA) hereby informs the general public that we will be joining the ongoing industrial action organized by the Uganda Medical Association. We sincerely apologize for any and all inconveniences caused” (UDA, 10.12.2021). They are joining the Uganda Medical Association, which is on their 5th week of industrial action and that’s all because the state cannot live up to their own promises. This is neglecting their mission and good governance, which is proving how bad the state is at governing at this current time.

Association of Graduate Nurses and Midwives of Uganda wrote yesterday a press release. Where the AGNMU states the importance of the medical interns. They are not only condemning, but stating that it’s a dangerous decision by the MoH, which will affect the 2022 cohort. Secondly, which was interesting was this line from the

AGNMU: “Ministry of health should pay medical interns as per the presidential directive. Why should a mother starve her children? Medical interns deserve to be paid for their great work they contribute to health care in Uganda” (AGNMU – ‘Press Release on Medical Interns Strike’ 11.12.2021).

It is clear, that the President, MoFPED and MoH have no plans of honouring their promises. This has been going on for too long and they have no plans of changing it. The state shows that with initially firing the interns and wanting to hire others. Which is not respecting or honouring the ideals of a strike. They are making the workers and the medical professionals into a commodity they can easily transfer or change. So, if these sorts of actions causes a brain-drain. The state created this by themselves and gave no incentives for the ones trying to be come a nurse, midwife or doctor to stay in the Republic. Since, the state doesn’t value your eduction or your profession anyway. That’s the message here and they been saying that with the inaction for months. Peace.