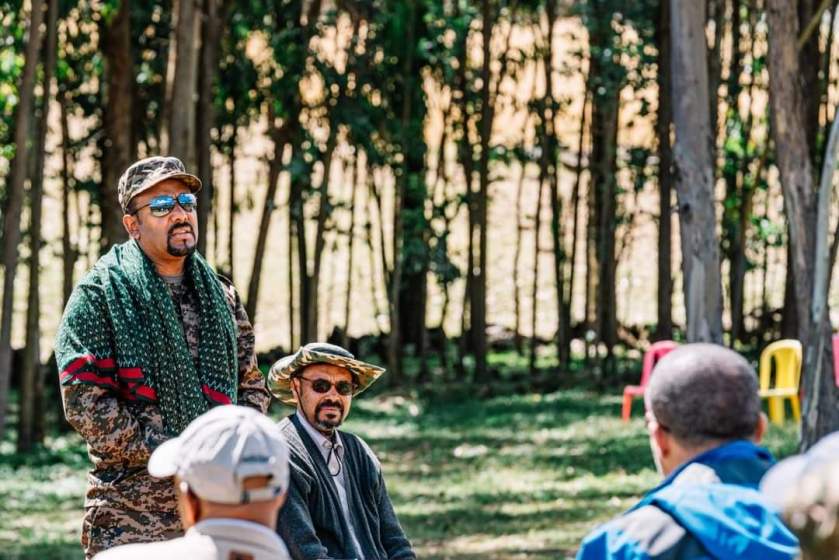 Prime Minister Abiy Ahmed Ali have returned to his office after a two-week counter-offensive, which has resulted in a massive advance for the Tripartite Alliance in the conflict. The amount of territory captured in Amhara region and closing the Afar region for the Tigray Defence Forces (TDF) says it all. The TDF-OLA alliance have had set-backs and they say they have strategically retreated. We don’t know what the game-plan or the reasons for this, but currently the Tripartite Alliance is steamrolling ahead. Because, of that … it might give reasons for the PM to return and demote the acting PM Demeke Mekonnen for a while.

“In this case, I have finished the first chapter and I have returned to office for a while, today and in the future, our enemies will continue to fight, leaving the path of hatred and hope, and choosing the path of love and peace” (Abiy, 08.12.2021).

He has finished the first chapter, but the PM was on the final stages of Operation Law Enforcement in the November 2020. So, we don’t know how long this chapter is or if this is just a ploy to sell more hope to the masses. Since, there been so many offensives and so many endings of this war. Therefore, it is hard to take this man seriously in December 2021.

“Our desire is always peace and love. We have been working hard for the implementation of the implementation of our need for Ethiopia’s unity to be protected and prosperous. But by not accepting the peaceful alternative that we have been presented repeatedly, by stepping out of our new political culture, by not counting the patience that was made to prevent the wrong and wrongdoings, by trusting the mouth and support of some foreign enemies, the terrorist TPLF was with the tax embezzles and causing danger to our country. Those who didn’t know Ethiopia until it seems that things are over and over were left with fear and fear. There were internal and external bodies who tried to scare us, afraid of us. Our child was a lost, and our pit felt like it was broken. Only those who know the secret of Ethiopia’s victory, it was a nature that they stood with perseverance till the end” (Abiy, 08.12.2021).

Abiy continuously and as a routine tries to sound like a man of peace, but we know by now that a lying warlord. The PM is acting like he wanted peace, but he was the one who issued the war and prepared for it. He coordinated and prepared the armies, militias and participated with the Eritrean forces to invade Tigray region. That was clear, just like it was clear that he wanted to assassinate the TPLF leadership in 2018. Because they weren’t part of the plan to consolidate all power within the Prosperity Party, which is something the almighty uncrowned 7th king will not mention.

“According to our plan, we have completed the first chapter, “Operation for National Unity in Diversity” in two weeks. You have made a wonderful story to tell our children by the sacrifices you made by the military forces, the regional special forces, the members of the federal police and the local militia and armed forces. All those of you who are in the middle of the field, you have seen with your own eyes that you are the precious wealth of Ethiopia” (Abiy, 08.12.2021).

The Survival Campaign has been renamed and become a pledge for unity, but a unity for who? The ones behind the banner of Abiy or the ones who fights against fascism? Because, the state itself is still at war with itself and has plenty of region enemies. As well, as the state has foreign entities aligned with itself and they are willing to do the combats for them. These are the ones violating its territory and tuft. That should worry the PM, but he is just busy going after the Tigray and not considering the other enemies he has on his soil fighting his battles, which is a sword that he in the end might not control. As the Asmara and Eritrean forces follows the command of Afewerki and not Abiy. He must be loyal to them and also just follow suit when the Amhara militia “Fano” does it’s work across the Republic.

“Especially during the survival campaign, we should continue making the unity of Ethiopians our wealth till the end of the world. In rural and city, in the country and abroad, in front and in front of our door, we are achieving one goal. We are hanging her from a place where no one can stand up and bring down Ethiopia. Let’s defend divisive ideas so that our unity can be developed. Let’s stand against the patriots of victory. Let’s read the faces of those who want to make things easier for us in our struggle. Let’s shame the opponents who are trying to make the victory we got together by fighting together and getting together. Ethiopia is the winner. We will not accept anything less than this” (Abiy, 08.12.2021).

He wants to string everyone along and be a big, unified group, alas he has undermined and sought after the ones not following his plans. These being the leadership of Oromia, Tigray or Ogaden. This man can easily ambush and silent them. So, these ideals and “medemer” theories are only for the books, because these words are hallowed and the foolish trust it. At one point he might bow to you, but in the next one he will shoot you. That’s the kind of man Abiy is and he has shown that to the world. Therefore, he needs the recognition not only in Ethiopia, but everywhere else.

“Even though the test we faced has caused us many difficulties and problems, it has brought us opportunities that we can’t get. Instead of the challenges we faced, we will focus on our opportunities and make Ethiopia a strong country that is capable of in all fields. Ethiopia would like to thank those who stood with us during our trials and supported us in the world square. I believe that we will soon return to our development agenda with full strength and to build Ethiopia on a firm foundation” (Abiy, 08.12.2021).

It is a fact and truth this was difficult for him. There was little to no positive signs. I don’t know if the expertise and merchants of death from abroad that saved his campaign. Because, there was little doubt or real optimism in the start of November 2021. The need for drones and other technical equipment has surely salvaged his campaign in combination with the usage of Eritrean troops. Therefore, the ENDF is a weaken entity, but the advances is boosting the PM’s ego. That is proven now. He can conclude another chapter and go back to the office.

Though, he has been to fresh and clean to be long in the dust, the dirt and in the frontlines. That’s Hollywood or Nollywood, but not warfare. A man who’s on the battlefield don’t have a clean fatigue but looking like he tasted the dust or dirt. That’s the just way life treat you and it’s unforgiving on the frontline.

Abiy can look like he has succeeded. Just like it looked the same when he was on the plane and ready to be the King of Mekelle. However, time will tell, if this is all a façade or the TDF have really lost grounds. At this very moment it is hard to tell, and you can just wonder… since this war is far from over. Peace.