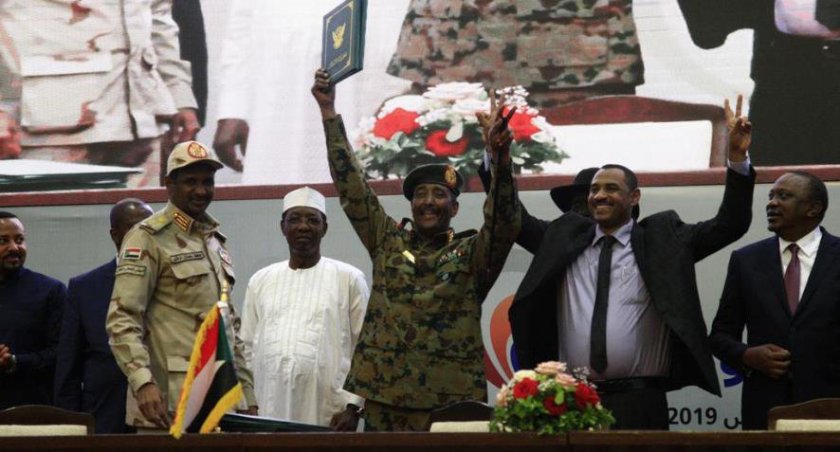 “October 15, 2021 (KHARTOUM) – Sudan’s Prime Minister Abdallah Hamdok has rejected a request by the leader of the military component to dissolve the FFC-majority cabinet and to appoint a new government they support. The Head of the Sovereign Council Abdel Fattah al-Burhan flanked with his deputy Mohamed Hamdan Daglo aka ’Hemetti” met with Hamdok on Thursday to discuss the ongoing political crisis in the country. Multiple sources confirmed to the Sudan Tribune that the head of the Sovereign Council and his deputy requested Hamdok to dissolve his cabinet and to replace it with another government involving the political groups that plan for a protest on Saturday” (Sudan Tribune – ‘Sudan’s Hamdok rejects Burhan’s request to dissolve government’ 15.10.2021).

Be aware, the Transitional Military Council (TMC) and the henchmen of President Omar Al-Bashir is still willing to ruin the whole revolution. The TMC and it’s army commanders wants takeover everything in bloodless coup d’etat. That wouldn’t be shocking, as the few technocrats and civilians in the Sovereign Council is already under pressure.

The Forces of Freedom and Change (FFC) gave way to early after the revolution and this is why they are paying a huge price now. The Sudanese people are not trusting the military commanders within the Sovereign Council. That is understandable, as the ones from the TMC haven’t worked hard or tried to regain trust of a civilian rule. The TMC cannot even work close or have the ability to resolve things with the FFC members within the Council. That says everything at this point.

We are now seeing that the President Al-Burhan and Hemiti is scheming to topple and overthrow the current transitional government. This will not solve the political crisis, but clearly ensure the TMC even more power than they already have. As they are the majority of the Sovereign Council and the civilians was a clear minority. Alas, the Generals wants a bigger cut and more power to silence the critics and the running riots, which could spark a second revolution as well.

That is what Al-Burhan and Hemiti fears. They fear the people will come with another popular uprising. As their popularity is close to zero and the people doesn’t trust them either. Why should they? Not like they have delivered or shown to be on course to any sort of election to civilian rule? They want to be an imposed junta on the people.

Now, that they tried to yesterday to dissolve the Sovereign Council. That we can take as an assault on the transition and the means to an end, which is to have all power in their hands. Al-Burhan and Hemiti would gain even more. That is the reality here and that shouldn’t be brushed under the rug. Don’t expect these men to give other opportunities. That would only be a smokescreen and for publicity sake. Peace.