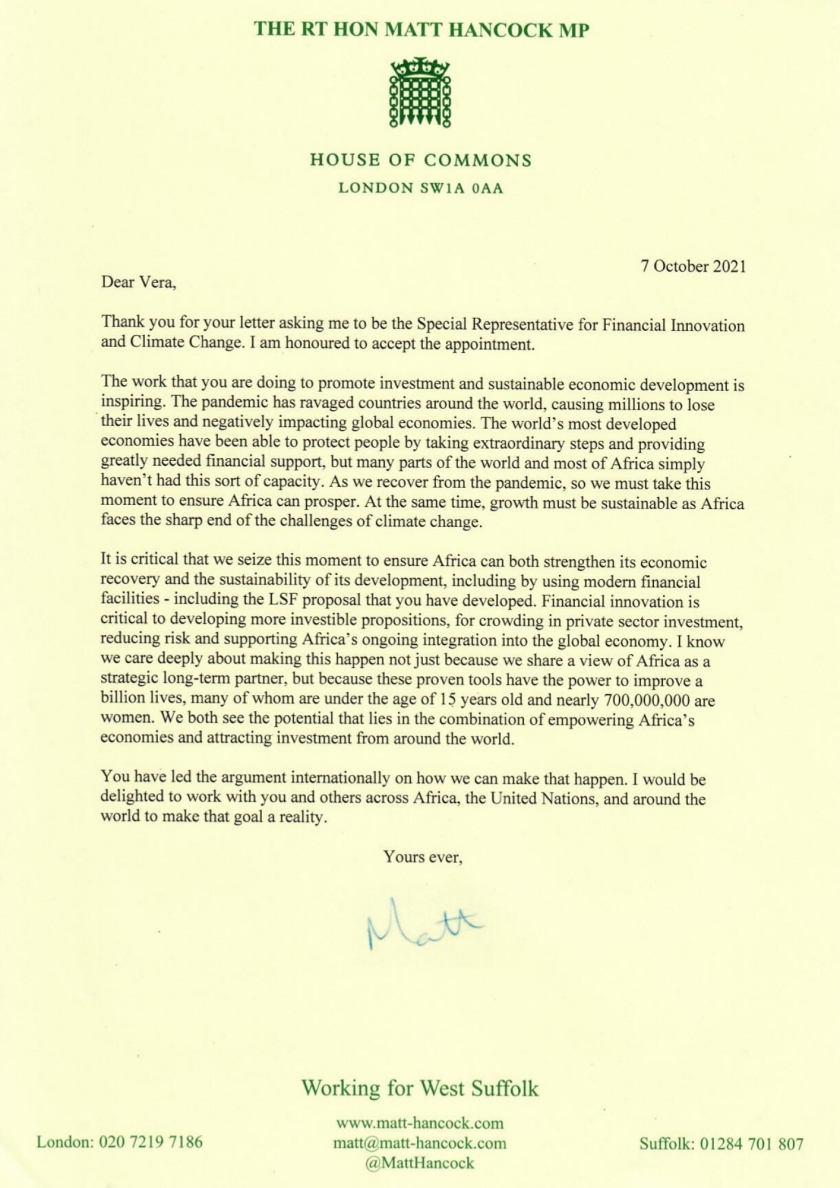 I find it insulting that such a failure of Health Secretary and a Conservative Party hack, Matt Hancock is appointed as the United Nations Economic Commission for Africa as the Special Representative for Financial Innovation and Climate Change. I don’t understand how he even got there. Because, his a failure at home and was sacked for a reason.

Just these days it’s revealed that his time in office, as the Health Secretary was shambolic. That they didn’t act properly in concern to the global pandemic. We already knew that something was up. When he gave tenders to his side-dish’s brother. This man is willing to do anything. The NHS wasn’t strengthen during his tenure, but instead weaken. Hancock wasn’t the proof of a certified statesman, but a hack and Boris Johnson loyalist. That’s why he was shielded. Even when he was inept and didn’t have the ability to govern.

What is the most insulting is that this is revealed as a reason for his appointment: “Under-secretary general of the UN stating that appointment given “on the back of success on the UK’s response to the COVID-19 pandemic”. This man gets rewarded for his lack of action, which costs thousands of people’s lives. When he was in-charge of the NHS and was the Health Secretary. He let the United Kingdom down. The man wasn’t prepared and didn’t do things properly. That sort of a man is for some reason fit for a Special Representative role in the UN now.

The UN isn’t appointing the brightest minds anymore, neither the ones who has achieved anything in their respective field. No, they are appointing someone who is willing to cheat and lie to the general public. A man who hasn’t taken responsibility for his time in office. That this man is supposed to help the recovery of COVID on the African continent is insulting and infuriating.

How can a man who mismanaged and was inept at home be useful across the continent? Someone who didn’t do his duty or help the ones in need. How is this man suitable or even qualified to do so?

That’s what boggles me. He presided over one of the worst public health failures in modern time. Hancock didn’t do his job and was only sacked for not keeping his pecker in order. He was shielded by the PM, because if your loyal to him. You can do everything you want in office. That’s why he could fail the people and not react properly to the pandemic.

This is why this man isn’t fit or have the ability to run for this office. To further insult with this one. He was one of the Ministers who helped to block international efforts to allow low and middle-income countries to produce their own COVID-19 Vaccine. In which has caused more death and devastation world-wide. Now, this man will clean up this mess, which he partially participated in and only gave donations through COVAX programme. When several of states wanted produce or be able to procure on their own. Therefore, this man is so not fit for this role.

Matt Hancock is inept and unqualified. He proved that with his tenure at home. When he could be so unsuccessful and manage such a travesty of results in the United Kingdom. That man has nothing to help or do on the African continent. This is just an easy pay-check after the utter disgraceful failure he had at home.

This man couldn’t even care or save the lives of the elderly at the care homes. How will this man serve another continent? If you wonder if something is wrong in the UN. The first thing you can point at is Hancock. He shouldn’t even be there and the continent has certainly more qualified people to handle the issues themselves. The continent is filled with educated and experienced people in this field. So, the UN could have sought the African Union and other Multi-National Bodies for a eligible person for this role. Alas, that didn’t happen and its a disgrace.

The UN is supposed to be better than this. His a hack and not fit for the job. Unless, they are happy with a man who thinks more about his pecker, than about his actual mandate or duties. Peace.