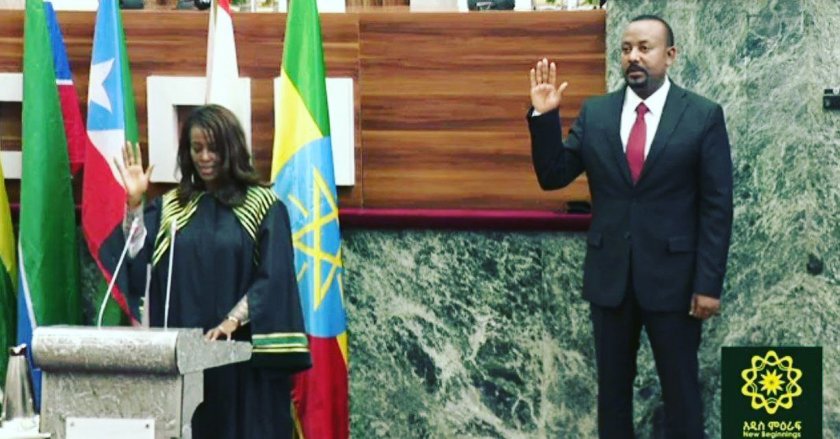 Today, the sham election is now fulfilled, as the opposition have been either boycotting, blocked or detained ahead of the polls. The Prosperity Party had no other choice but to win in the polls that happened during the calendar year of 2021. There was no other results that could happen. As the other parties and the prominent opposition have been kept behind bars, disallowed to organize or even been labelled as “terrorist”. Therefore, today’s swearing-in was a formality and not a ceremony of honour.

This is the first election of Prime Minister Abiy Ahmed Ali who took over the EPRDF in 2018 after the previous PM stepped down. He was internally elected and given the mantle until the next election. An election he postponed because of COVID-19, but held a year later while the same pandemic was still lingering on. Therefore, the excuse to postpone has been for whole other reasons.

PM Abiy have clearly done whatever in his power to consolidate power. That is all clear, as his allies are weapon-brothers and they are willing to use all means to silence detractors. There is no manner or way that isn’t used. If it is political charges, seizing businesses and keeping them behind bars without any due process. If not killing and stopping the parties from actively working. This is why regional state parties have boycotted or not been allowed to be on the ballot. Which just states that the PP was destined to win. Since the ones who had the popularity and the leaders people trusted in these states wasn’t allowed to run or even participate in this poll.

With that in mind… the political mindfuck is that his supporters calling this the “first democratically elected Head of State”. That is dismissing the 2015, 2010, 2005, 2000, 1995, 1987 and 1973 elections for instance. This is happening because the PP is trading itself a “reformist” party and different than the previous coalition of Ethiopian People’s Revolutionary Defence Force (EPRDF). However, this election is copying means and ways of which has been common by the ruling regime in Addis Ababa. There been polls, but everyone knew who to vote for and the opposition didn’t have a true voice or ability to campaign. This just sounds like today. Therefore, PP and EPRDF is the same and when people called 2015 elections sham. The 2021 elections is no difference. Only the name of the party and the leader of such party.

What we can expect from Abiy is that he will follow his warlord ways and do what he can to annihilate his enemies. That is clear when the Upper House of the House of Federation has elected previous Amhara President Agegnehu Teshager as speaker. That is just a further proof days after he stepped down as the regional state President. This is what the regime is doing and his a loyal man of the Head of State.

The PM will not deliver a “new beginning”. That could only have happened in 2018. There is to much water under the bridge. To many lives at stake. He has started to many conflicts, tensions and unfinished destruction to suddenly turn to another type of leader. The PM is galvanized by war and by creating enemies. Instead of dialogue and peace, he prefers to use violence and monopoly of legal justice to strangle his enemies. Therefore, the “Medemer Terror” will continue. His allies are still there and they will continue to work with him. This alliance will prolong and not wither, unless there is no profit or possible way of actually winning it.

The PM undermined and arrogantly thought he could finish the Tigray conflict within a months time last year. However, we are in October and nearly a year after with no end. The conflict has spiralled out of proportions. People are dying of starvation and man-made famine. His policies are draconian and genocidal. The state is arresting people on the basis of ethnicity and even former allies in the Tigray interim government has been detained as well. No soul left behind. This conflict has also gone into Afar and Amhara. While there violence appearing in Ogaden region as well and guerrilla warfare in Oromia. The state is supposedly behind massacres in Benishangul-Gumuz. So, it is not like it is only warfare and war-crimes happening in Tigray region since November 2020. The state had already misused the same sort of violence in Ogaden region and Oromia. That was to silence and stop the dissident there. Also, on the forefront in Oromima for instance to stop the Queerro from rising to power or have ability weakening the regime.

The PM will not deliver a “new beginning”. That phase is over. We know what we are getting and he still haven’t made it rain. This man is willing to bury his neighbour just to rule supreme. Innocent civilians are dying because of his ego and entitlement to be the head of state. Today’s swearing-in and new legislative term will not significantly change things. The only thing it does is to legitimize it. He has the polls and election to give him leeway. However, the truth will eventually come out.

This will only ensure the Prime Minister can continue his “Medmer Terror”. He has the whole House of Federation and the PP rules with a massive majority. There will be no other way. The opposition and the dissident will continue to suffer. At this point of time there is no remedy. For me there is no hope and possibility for change. Since there been a year and longer where Abiy has used force to get his will. That’s why Jawar and other are still behind bars as a political prisoner. Abiy can act like those things doesn’t matter, but it does. Because, in Oromia his party would have been crushed if Jawar and allies stood on the ballots. The same with ONLF in Ogaden. Therefore, it is deluded to think he usher in “new beginning” now.

I know that I would be deported or detained if I arrived at Bole International Airport. That’s because, I have several of blog-posts dismissive or disregarding Abiy. The state would call me “anti-Ethiopian”. While I only want justice for the ones suffering injustice and impunity. Just like I want that for everyone. Abiy is insincere and is an tyrant.