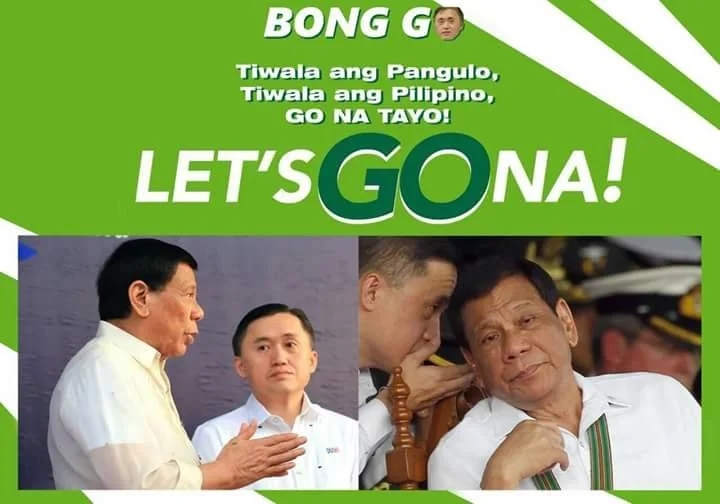 The Personal Aide to Duterte since 1998, Christopher Lawrence “Bong” Tesoro Go is now nominated by Partido Demokratiko Pilipino Lakas Ng Bayan (PDP-Laban) to be Presidential Candidate, as the current President Rodrigo Duterte is launching his Vice Presidential campaign as well.

The PDP-Laban might think this is a good idea to have the Bong-Go/Duterte ticket. However, to have the personal aide of Duterte as the next President sound weird at best. That shows the PDP-Laban is all captured by Duterte. Not only is Duterte running as the Vice President in the up-coming election, but his “utility” man is his succession.

Bong Go is also the “selfie-king” or the “photo-bomber” who happened to be elected Senator in the midterms in 2019. Before this he was appointed directly by Duterte. Just like he was all through the years in Davao when Duterte was mayor there.

It is hard to take Bong Go seriously as a Presidential Contender when all his known for is carrying the water for Rodrigo. This man hasn’t been independent or a proven record. His a clean slate and only has a personal belief in Duterte. This man would praise and pledge allegiance to Duterte before anything else. That’s why Bong Go was willing to forfeit the candidature for the daughter of the President Sara and her possible race for President. Therefore, it is hard to believe that this man is eligible and only there out of loyalty.

His the well-known Executive Assistant and Personal Aide of Duterte, after this Personal Campaign Assistant and Special Assistant before elected Senator. It is not like he has long history or a well forged political life himself. It is all mirrored from Duterte. Bong Go would be a nobody, if he didn’t have the close working relationship with the President. That’s why it’s striking that his the successor in 2022.

We can wonder if he plans to secure more contracts to his kin in CLTG Builders or Alfrego Builders and Supply. However, we cannot know, but what we do know is that these two companies has gotten several of major contracts during the Presidential term of Duterte. Which just happens to be relations of Bong Go. It wouldn’t be shocking if he continued to favour his own after the “promotion” to Presidency.

You know that the PDP-Laban isn’t looking for the most experience or ready person for the Presidency. Everyone is just supposed to follow one man and his ideas. Why else would you nominate the personal aide for the grandest office in the Republic?

There should be someone with more flair, finesse and even more qualifications within the party. Not just a “yes-man” and a token toy soldier of Duterte. Bong Go will only follow orders and be a continuation of the Duterte term. He is seemingly just a pawn and a useful idiot to put in his place.

Expect Bong Go to splash the cash and have “unknown” sources for it ahead of the elections. He will suddenly have fountains of it and he will go after every allegations of where it comes from. This man will get help from Duterte and his schemes. They will campaign steadily together and it will practically be a second term for the incumbent. Especially, if they are both elected.

Bong Go will not challenge or question Duterte like Duterte have done with Robredo. They will be a “dream-team” of one alpha and his “bitch”. Bong Go might be the President, but as long as Duterte is the VP. We know where the power lays, because it is not like Bong Go has ever sounded out of term with him.

This is just what the PDP-Laban is willing to do and how the wheels are running. The party should have sought for someone else to be sincere. However, Bong Go is only there because of Duterte and nothing else. Peace.