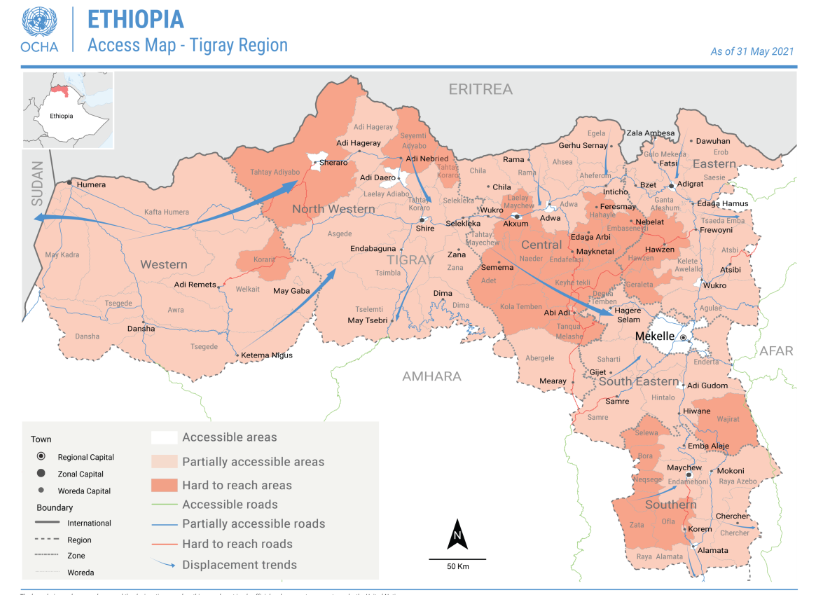 “We are devastated to hear the Tekeze bridge in Tigray has been destroyed. This was one of the main supply routes into Tigray which means aid efforts will be even more severely hampered than before. The IRC continues to call for unfettered humanitarian access to the region” (International Rescue Committee, 01.07.2021).

“The Ethiopian army and the Amhara forces have demolished the bridge on the Tekeze river, that connects the towns of Shire and Maitsebri with heavy weapons; fearing that the Tigray Defense Forces might chase them” (Axumite Media, 01.07.2021)

The destruction of Tekeze bridge isn’t a single incident, as the Ethiopian National Defence Force and Amhara Para-Military Group “Fano” as they are retreating from the Tigray Region. They have been destroying important infrastructure and utilities.

The authorities and the state actors have blocked all roads leading to the Tigray region. In addition, they have been destroying power transformers and other equipment putting the region into a steady blackout. This is coming as an extra to the jamming of phone-lines, blocking internet and stopping all ordinary communication from the region.

The state as they promised a “unilateral ceasefire” is doing what it can to take it a bridge to far. Not leaving in peace, but trying to get Tigray back to the stone-age. As the basic utilities and communication equipment will not because the state has effectively destroyed it.

What the Ethiopian government is delivering to the general public of Tigray region. Is no banking, as all accounts are still frozen and they don’t have the ability to do that. There is no electricity and that has been cut off with deliberate action. Phone-lines are not working and internet is blocked as well. A total communications black-out, which have been done before and re-issued to add more suffering. The worst part is the destruction of the fields and the agricultural output. While stopping and blocking aid from getting into region. Making a huge catastrophe of epic proportions, which are not only in dire distress, but in full blown man-made famine. That is happing, while the state armies are busy blocking the roads into the region and making it impossible to get into it.

What do you call that?

Isn’t that terrorist and crimes of war? This is the effort and the product of a Law Enforcement Operation? This is the results and the proud achievement of the Prosperity Party? Is this the reforms of the elites of Addis Ababa and Bahir Dar?

If so, please do yourself a favour and piss off. You are a disgrace to humanity. Letting children, families, old and young die of starvation. Lack of basic necessities and stopping humanitarian access to the region. Because, you with your own armies and on command have created a humanitarian disaster.

All the ones dying as a cause of this and as a result needs to be answered for. The state, the Prime Minister and his party have all to address this and be held responsible. They made it happen and they let all guns out.

This is a bridge to far and they are making it much worse. Out of old grudges and there is only one way out. Since Addis Ababa doesn’t value or see these people as a part of their Republic. At least how they are appearing and their choices of destroying everything they can.

The Humanitarian organizations needs to make a way and a road, which comes from Sudan into the Tigray region. So, that they can have convoys and transports to the various parts of Tigray. Which is hurt by the man-made famine and the humanitarian crisis which is occurring right now. There is no time to loose and so many lives at stake.

Lives that Abiy and Addis Ababa doesn’t care for and their actions speaks louder than words. Peace.