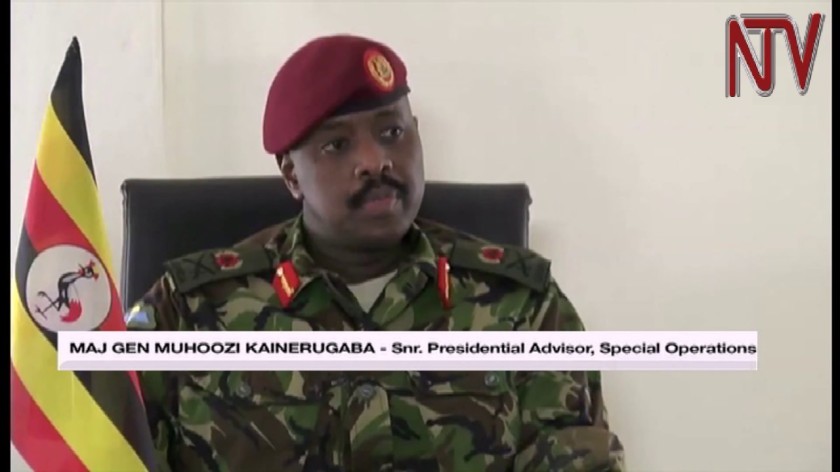 As the days go by and the rumours are spiralling out that Lt. Gen. Muhoozi Kainerubaga, the commander of the Special Forces Command (SFC) and the Senior Presidential Advisor have been elevated again and appointed to become the Commander of Defence Forces (CDF). This is after former CDF David Muhoozi has gotten a Ministerial Post in the current cabinet.

The pendulum is slowing turning in the direction of the son of the President. His getting a bigger and bigger role. It is like his aspiring and turning more vital in the National Resistance Movement and in government in general. His been on sidelines, gotten training and had his strides. He has ordered the guns on the streets and was also involved in the massacre in Kasese. Therefore, he knows how to order death and assault citizens for political gains. That’s what he does.

The son will be as brutal as the father and he doesn’t care. His entitled to everything. If he becomes the CDF in this term. That is to further his cause. That is initiating the succession and showing the truth behind the “Project Muhoozi”. That Muhoozi is the second coming of Christ and the only saviour of the Nation.

While I doubt people will accept this act of monarchy in a Republic. It isn’t automatic of a son to takeover for a father. There will be answers to this and he doesn’t have the standing of his father either. The tyrant got a solid grip and kept that over the years. The son has a feel social media handlers and paid bloggers. However, they will not shell out love, unless they are getting paid and securing their future.

The son has already rose up high in ranks because his the son. Not because his a great general or a good army commander. He has gotten a bigger role and upgraded unit or army port-folio because of the President. His been respected because his part of the first family. Still, it is not like his anyone or anybody with flair, policies or anything to offer.

His just a name and a title. An entitled brat who has gotten life with a silver-spoon and learned how to polish gun-barrels and shoot with rifles. If he becomes the CDF. That’s just a further proof of the slow roll-out of Project Muhoozi and the succession after Yoweri. The state can deny that and the ones in-charge of the propaganda. However, the actions and his meteorical rise in the past. Just shows how real this is and what efforts is being made in his favour.

Nobody else with such a record and past would be considered to run the CDF. It is only because his the son and it shows that family matters more then credibility or ability to govern itself. They have just hand-picked him because of his family ties and prepare him to become President. Museveni was the Minister of Defence before he rebelled. So, it seems like a plan and strategically put him there.

To be able to quell anyone who dares to oppose this regime and have a loyal commander on top. That will do the dirty laundry, because he will profit of it and earn massively when his time comes.

Project Muhoozi never dies, but continues to be alive. Peace.