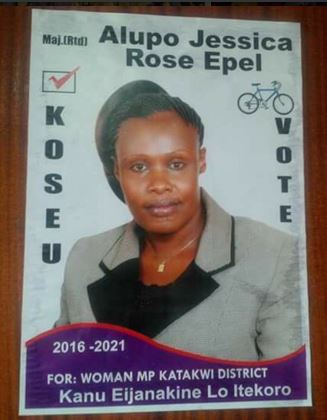 “Although it’s important to realize human rights and fundamental freedoms which contribute to democratization of the society; the programme has to fit in one of the examinable subjects so that more effort is put by teachers” – Jessica Alupo

It is now official the Independent Member of Parliament, the Woman MP for Katakwi District Jessica Alupo is the official Master of Ceremonies aka Vice-President in the 11th Parliament. She is 47 Years old.

Jessica was elected into Parliament in 2001, then she ran on a National Resistance Movement (NRM) MP. Alupo won her re-election in 2006 and in 2009 was appointed the State Minister for Youth and Children Affairs. Again, she was re-elected in 2011 and appointed as the Post of Minister of Education of Sports.

What is striking about Alupo is that she lost in the NRM Primaries in 2015 and in 2020. Though she was able to retain the MP position in the General Elections in 2016 and 2021. This was done as the Independent MP.

In 2013, President Museveni promoted Alupo to Captain as well. So, the President have really high regard for her.

She has shown her loyalty, but also been rebelling for her own cause. While being supported and getting Museveni to be there for her on the campaign trail. This was happening while she was an independent even. Therefore, even as the Katakwi Primary Elections dismiss her. She passes through the in General. That is really it…

Now, she will not get legislation done. Neither will she be effective. Alupo is just a high ranking official with a fancy title. The one taking over for the Edward Ssekandi. People will not ask for his number or his location anymore. Those jokes will sadly die and we will wonder if Alupo will make a living out of this.

The Independent NRM Leaning MP has become the VP. A useless VP. Let’s see how she plays this one out. As she has battled the ‘Teso Mafia’ and still gotten elected twice. Peace.