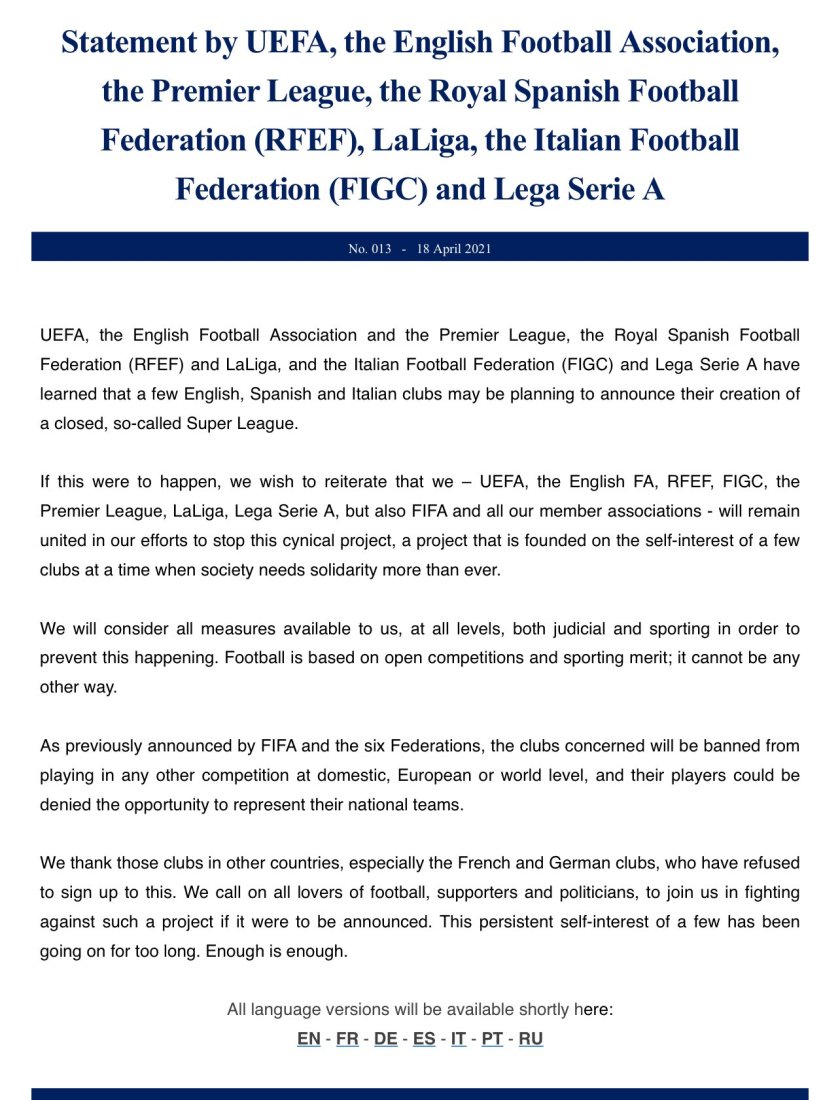 The establishment of the European Super League (ESL) is practically the “Owners” League. This is made by and made for the owners of these clubs. The owners of these Football Clubs see the profit and possible incentives to control the licensing and merchandise directly. Not being part of the European Football bodies or governing associations. This is taking direct control of their investments and finding ways of getting a possible cash-cow.

The Super League is the European answer to the American Money-Ball. Where they have “World Series”, NBA and all the other leagues where Franchises and Owners of Teams are automatically part of the leagues. These are not made by national associations and by league structures that makes it possible for the underdog to get to the top. Because, the leagues are pre-fixed and has the Major League Teams already secured play.

The same will be with the Super League. Where the Founding Teams and such will have a favourable spot. These clubs will be there and never get relegated. These clubs with their massive wealth will sign of their own rules and together not care about for instance the “Financial Fair Play” or other measures to make the game more interesting.

With this sort of game-play and league. There will not be possible to see Burnley or Sheffield United beat Manchester United or Tottenham. No, they will not be able to participate or even try to play other second tier teams in the other leagues. They are practically shut out of the competition and the league is a narrow joint venture between the capital strong clubs of Europe.

The ESL is just made for the owners and not for the supporters. This is not intended on making it better for fans or making the sport more competitive. There is already Champions League and Euro League under the UEFA umbrella. Where the European Club Association has a say and is a vital member of. Therefore, ESL is playing around this and trying to be challenger to this.

What the ESL is losing out of is the direct competitions and the growth of the national leagues itself. If La Liga, Premier League or Serie A wasn’t competitive and interesting the supporters would ditch that too. However, the race for the titles and the race for the European titles as well have fuelled the interests for years. The ESL wants to cash out of that without putting the work down.

These clubs wouldn’t be interesting or as big as they are, if they didn’t participate or being part of the bigger picture. So, if they go along with this one and plays this one out. They are outplaying themselves too. You cannot grow naturally on your own. The competition will be pointless and mediocre with time. Especially, if the fans ditches things or boycotts it. As they feel betrayed by the owners and the financial backers of this. The owners wants quick money and control. They don’t want to be playing to rules of the game or the governing bodies of it. No, they want to the dough and wants to eat quickly.

That is what happens when you mix a lot of rich billionaires, oligarchs and hedge-fund investors taking control of Football Clubs. These are only calculating profits and possible returns. They are all in for their ends and doesn’t care about the love of the sport. These has invested to get money and earn money on buying the clubs. That is why they are doubling down on it and preparing for the ESL.

The ESL is the “Owners” League. It isn’t made for the supporters, but as a incentive to make it more profitable and cash-in money quickly. However, that can also only happen if the supporters actually follows and does participate in this. Nevertheless, supporters and fans are already outraged.

We know that will matter, but they are not taking that in. As the money is to big to care about few screaming out and being mad. They need to see the bottom-line and if the money goes from red to black. When they do that… then they are earning money and they don’t care what the older fans cared about. Peace.