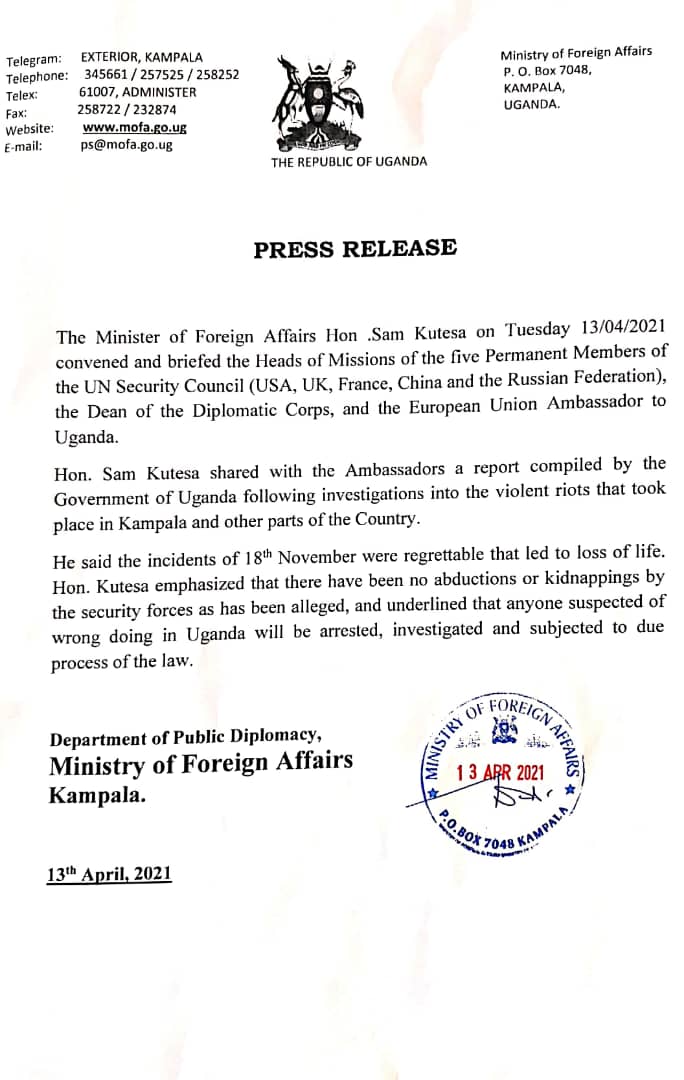 Foreign Minister Sam Kutesa yesterday published a press release where he addressed Western Powers and the United Nations Security Council (UNSC). Which in itself is a natural thing to do for a Foreign Minister. Especially, when you want to address or explain certain situations for context to the international community. However, his so far from planet earth. He must either already entered Akon City or gotten a VIP ticket to Wakanda. Where I want to join him in the near future. Because, it must be bliss to live like him.

Kutesa is really out of line and lying out of his ass when his saying abductions doesn’t exist and arrests only happening through due process. The minister needs a reality check and maybe someone should enlighten him. He must living on pink cloud and drinking some powerful juices to not be able to apprehend the truth.

The Minister should connect himself with the Jeje Odongo and Robert Kyagulanyi aka Bobi Wine. Even have a talk with the IGP Okoth-Ochola , Lt. Gen. Muhoozi Kainerubaga and others who are associated with the abductions, kidnappings and unlawful detentions. There are several of reports and security outfits, which has been in direct connect with the “drones” or “Panda Gari’s”. That is the state effort before, during and after the elections this year. Therefore, Kutesa needs to get his mind right and corrected.

He knows perfectly well that this has occurred and happened in the Republic. His just hoping the International Community and these dignitaries are naive. That these folks knows nothing and will eat the lies of his hands. While civilians are getting court martial like soldiers. People are abducted and the state doesn’t even produce the proper list of the ones who is taken away. That is why its disrespectful to the relatives and the loved ones of these individuals that the Minister says this.

Kutesa should know better, but rather live on a lie, than speaking the truth. That is the character of him and the regime he serves. The Minister is a reflection of how the NRM operates and how they think they can whitewash the sinister acts they do. That is just the reality of it all and its tragic.

Sam Kutesa needs to produce does tickets and ways to get Wakanda. If not how he already has entered Akon City. Since, with this sort of statement he cannot be sincere. It is false and a lie. The minister needs to chill or apologize about this.

The Minister needs to get an understanding or back-off. Because, the lies is easy to decipher in 2021. It is not like the grapevine is silent and the truth isn’t leaked out. This isn’t the bush and where you can control all aspects of information. That is impossible at these days and he cannot pull up a smokescreen to hide the facts.

Kutesa needs to call up Odongo and get some knowledge. Clearly that’s not happening. If not, his trying to deceive the world and that wouldn’t be shocking in 2021. Peace.