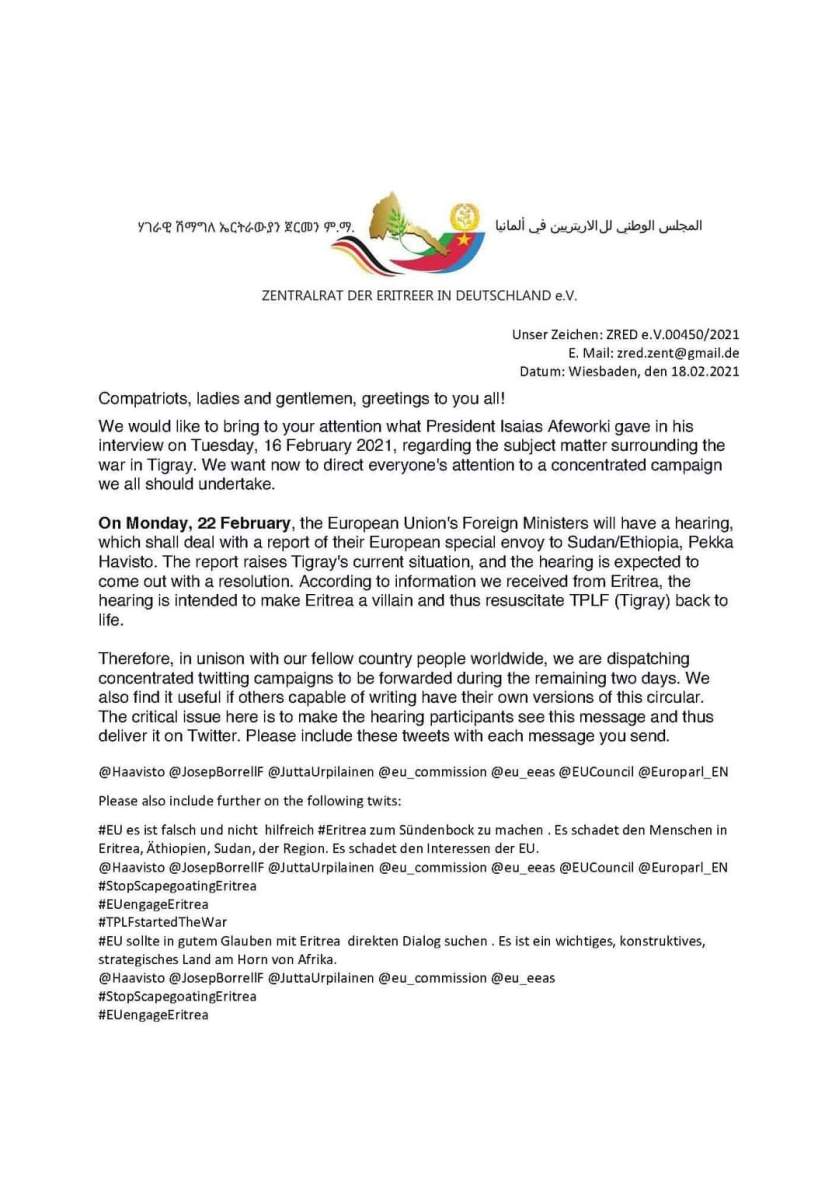 The government of Eritrea and one of their Foreign Envoys are spreading a Twitter Campaign to clear its name. That is a deliberate act to clear its name and make Eritrea look better. They wouldn’t do this… if they didn’t have anything to hide. These sort of campaigns are done to get a favourable view of a Republic or a government.

That Eritrea … needs to do this. The Eritrean National Committee in Germany is the one that is leaked online. Showing their two day plan. Which was from 22nd February to 24th February. That means the end of the campaign is today. Which is all focused on the #StopScapegoatingEritrea and focused on directing the outrage at the European Union Representatives. It is easily to see the amount of public following this. As, if you either search for #Ethiopia or #Tigray on Twitter. You find several of similar posts with the same message and its happening at a large scale.

Therefore, the Eritrean diaspora is following this one. They are following the direction of the Asmara government. The Eritrean National Committee in Germany made a circular, where people could copy the tweets and make them their own. That is how far the government is willing to do. Surely, other Envoys would do the same. It is to do same propaganda for them.

It is not like the Eritrean government is an open and democratic sphere of the world. I cannot remember an election. Neither remember a release of a national budget or accountability of the government in general. Only remember citizens forced to work for the government and year long conscriptions in such a scale… that people are fleeing and seeking refuge elsewhere. The state might want another vision about it, but that all depends on the decrees and orders from President Isias Afwerki. Afwerki is the leader for this fiefdom and his a guy you should not challenge.

That is why this sort of propaganda campaigns fits well as a mission to sway public opinion and get another perspective of Eritrea. The Ethiopian government did for a long time say the “Eritrean Army” wasn’t involved in the conflict in Tigray. However, with time they had to admit it and the reports of their activity is horrific. Still, the Eritreans doesn’t want to take accountability and blame TPLF for everything. That is what both does government does… blame TPLF and move-on to another atrocity.

This Twitter Campaign only proves they are trying to shield the reality of the Tigray conflict and the damage they have done. If they need to do this to get their points across. You know something is deeply disturbing and wrong. If Ambassadors or Envoy in Europe is sending this to asylum-seekers and refugees from Eritrea. It says a lot what they are willing to do and what they want from the diaspora.

Eritrea is participating in the civil-war and should be held accountable for that. Maybe, Asmara wants to skate off to paradise and not answer for anything. However, in the real world that isn’t happening when you bring in guns and part-take in warfare. Eritrea, just as all the other participants needs to be held to account. That isn’t only about Asmara, but everyone from TPLF, Fano, Ethiopian government and Eritrean government too. All of them has to answer for their ills and destructive behaviour. Not just one party…

So, this campaign only shows that they are guilty and trying to shield themselves from it all. That is not how its working… Peace.