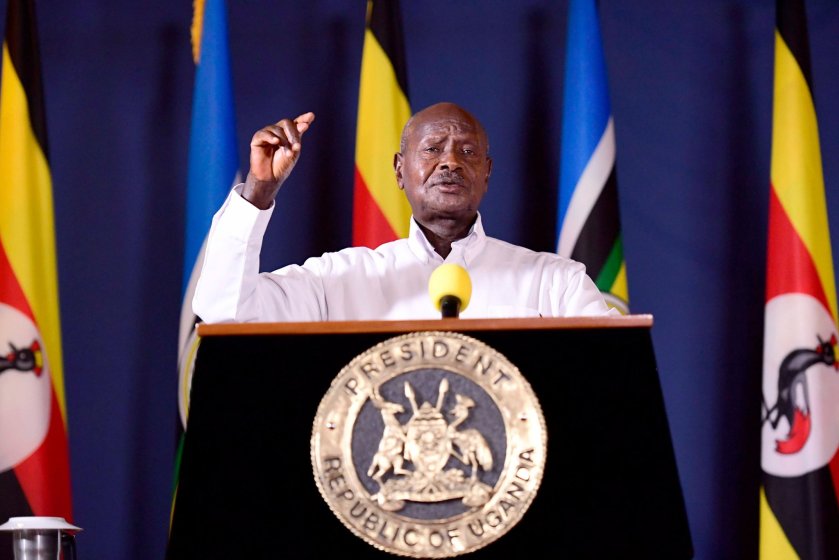 “When I heard of the unfortunate death of Isaac Ssenyange alias Mando Zebra, Uganda’s boxer and former captain of the Bombers. I telephoned his wife who narrated to me the events in detail. Zebra was an NRM supporter, & was mobilising for us so well. He was also training many youth in the ghetto & giving them hope in their search for meaningful life. Indeed, Zebra was meant to come and see me when he was killed. Zebra’s wife told me people in police uniform came to pick Zebra but he jumped over the wall and could have met another group who shot him first, I thought they were thugs disguising in uniform, but as I investigated, I found out that he was killed by security personnel. This is sad and devastating and I am very sorry about this. I will keep on this case and will bring every finding to the knowledge of Isaac Ssenyange’s family and the murderers will be dealt with accordingly. I am so sorry” – Yoweri Kaguta Museveni (31.12.2020)

Today in his New Years Message to the Nation, the President, His Excellency and Commander in Chief in explicit detail told that his security operatives have no issues to be the judge and the hangman. They can both seal someone’s charges on the spot and take their lives. That is how much value a persons life has.

That someone like Isaac Ssenyange aka Zebra can be taken that easily and cheaply says it all. This is a sign that lives are worthless and can be sold for a chapati. There is no value or concern. The order to take a life is without consequence and can be fixed. Heads and skulls can be broken, the heartbeat can be stopped and the person be silent forever. That is the memo from this New Years Message.

That the President and the Law Enforcement. That the ones who are supposed to save lives and be there to keep them secure. Have no issues to be the fatal force and end people’s lives. They can be judge and the hangman. They can in the blink of an eye take a life and serve no punishment for it. That’s because the authorities and the state allows it to happen.

This is extra judicial killing. A murder in broad daylight sanctioned by the state towards a citizen without a trail, without a court and without charges. A blunt attack on the persons rights and freedom to live. No decency and just death.

This is the state that the President is proud of delivering to his citizens. First kill the and later “investigate” as the case goes cold and nobody will ever know what happens. Secondly another similar affair happens and he promises to “investigate” and that case goes cold too. That is how he runs things. It is a reason why so many cases is never solved and the killers never are caught.

These men was ordered from “high above” or the inner-circle to do their bidding. As they needed to get rid of someone. This time it was Zebra. That says it all and it was all in the sphere of the Presidency. As the man was supposed to met the President too. Just like other high ranking officials killed before meeting him. This follows a tragic pattern.

If you don’t know. Now you know. This was an extra judicial killing and the state will never solve it. It will be a cold case until a new regime gets in power. Until then, this and so many other similar cases will be indefinitely unsolved until eternity. Peace.