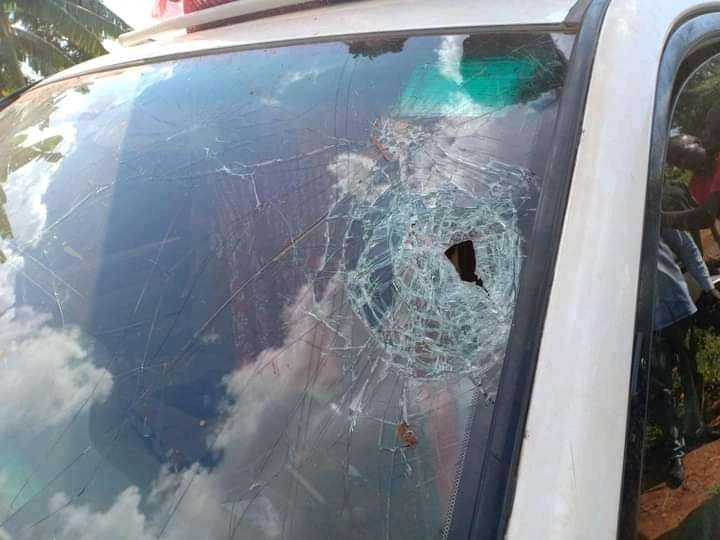 Today, there could have bene a direct assassination of the Member of Parliament Francis Zaake, as he sat beside the driver of Robert Kyagulanyi aka Bobi Wine. This happened in Jinja, as the National Unity Platform continued to pass through the Republic and campaign. Which have been met with hostility from security personnel. These have assaulted the convoy and they have directed their weapons at the public.

The 1st of December 2020 have already been tragic in concern to the NUP campaign and the NUP convoy. As the bodyguard ASP Kato and Dan Magic is hospitalized. Therefore, today has been bloody enough and the state has served so much injustice already.

However, the state amped up and as the convoy continued to the next district. The law enforcement was ready and aiming about the car of Bobi Wine. They aimed so closely that they could have killed Zaake. That says how far these guys are taking it. To incite violence and use force against the opposition. When it is this easy to aim and shoot at a car, which you know a Presidential Candidate and his associates are sitting in. Just mere luck and grace saved their lives.

This here isn’t campaigning anymore, but being ambushed by law enforcement. The NUP campaign is met with bullets, tear-gas and violent law enforcement. If this continues, then someone close to Bobi Wine will die, like his driver did in the Arua By-Election. That could easily happen again and even Bobi Wine could be hurt as well. It is just mere luck that nobody died today.

That its mere luck that no one is dying during campaign … Yesterday people did die on the road, as the Police have blamed the supporters for this. Not taking any accountability themselves. Therefore, they will surely make excuses for the pain and suffering put on the campaign today.

Just like Bobi Wine’s message: “Our lives are in danger! After blocking us in Kayunga, on the way to Jinja, they blocked the main road & diverted us to a remote road. As if to set us into a ‘kill spot’, they shot the tyres of my car and directly into our windscreen, narrowly missing Hon Zaake and my driver” (Bobi Wine, 01.12.2020).

So, this shouldn’t be happening. This isn’t campaigning. This is sending message, that if you continues. We can kill you and get rid of you. If you can easily move like this and shoot at the car, which a Presidential Candidate was riding in. They cannot defend it … this is despicable and disgusting. Mere luck that nobody was hurt or got a fatal shot. That shouldn’t be a thing, but clearly it is. Peace.