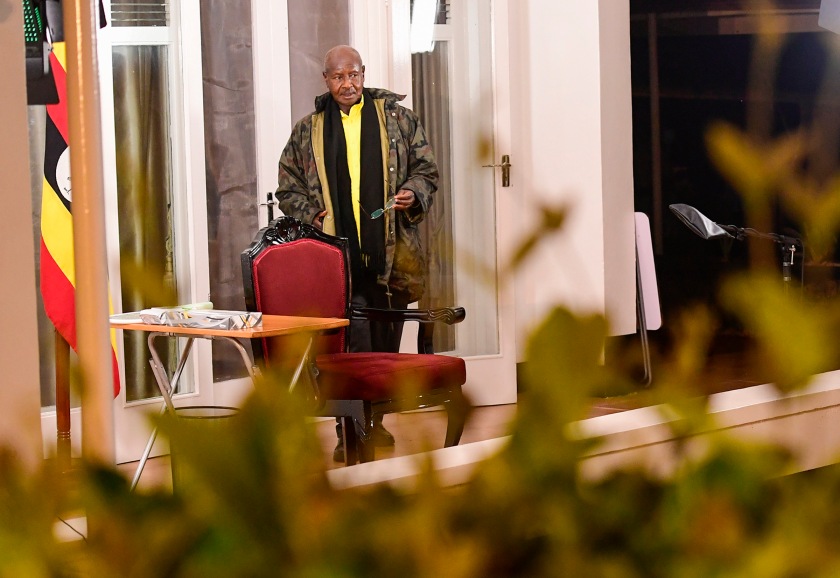 Sometimes I wonder if President Yoweri Kaguta Museveni ever listens to the words coming out of his mouth. That he doesn’t the ironies and hypocrisy in his own words. A man who for instances claims the opposition leaders are supported by foreigners, but has indulged no proof. The same with the protesters and rioters. A man who has shown no grievances or care with the ones killed. He took his time to this. During the National Address today, he did send his condolences and promised an audit to compensate people. However, I don’t trust that a minute…

Well, Museveni has to intimidate and talk rubbish. He has to show strength and force. However, this man talking about nobody is untouchable. Nevertheless, the old man acts and lives his like that. He is initially speaking of himself. Everyone else can answer in Court, but not his own self. That is never happening and we know that.

The President even warns and comes with stern warning. We can assume that he will answer anyone who oppose or demonstrate. Still, that is not really news. The police and law enforcement have crackdown on every movement, which isn’t the movement itself. So, we can expect the attacks happening.

Some quotes from today!

“If Hon Kyagulanyi was arrested, his supporters should have waited for him to go to court like he eventually did. The feeling that Kyagulanyi is untouchable because he is a politician and prompts people to riot must NEVER be repeated” – Museveni (29.11.2020)

“Some politicians working with foreigners have been promoting impunity and swearing that they will make Uganda ungovernable. We have been monitoring them through intelligence” – Museveni (29.11.2020).

“So those who rush to condemn the Police and Army. Yes, they do mistakes and if they make mistakes I will be the first to condemn them “but what I find disgusting is the dishonesty, especially those who misdirect the young people” – Museveni, 29.11.2020).

“Police should audit this phenomenon of ‘stray bullets’. If a bullet goes astray, we should know why it was shot. If 32 of those killed were rioters, it means we have at least 20 people killed by stray bullets” – Museveni, 29.11.2020).

I will not indulged in the big whoop. The apparent reasoning of the old man is hypocrisy. A man who himself used the guns to get to power and let go. The man who himself acts like his untouchable and the “high above”. The man who everyone is supposed to praise and support. His movement, his vision and his party.

The old man is forgetful or selective. That the man who spoke for peasants and said all their avenues was closed. Therefore, he needed to go to war. That man is saying that people shouldn’t demonstrate or riot for their leader. A man who took up guns and went to civil war for his own cause. That is why his a hypocrite. A big giant hypocrite.

Bobi Wine is only signalling the things that is wrong and the double standard of the society. What his doing during campaigns. Is the same the NRM is doing. The President is gathering crowds and they have processions. That is evident by pictures. Even though the speeches of the President is in venues with less people.

Still, the order of things is always in favour of the President. He is saying the opposition is supported again by foreigners and that protesting civilians are criminals and hoodlums. That sort of approach is only undermining and only shielding the efforts from the citizens. Who are using their only avenue for grievances. An avenue that the President is not allowing them too. Only coming with empty pleas of condolences ten days after the fact. Before that he has called it nonsense and wished it away.

President Museveni acts and lives likes his untouchable. That man shouldn’t comment about others. At least, Bobi Wine is more popular and have more of relevance in 2020. Than Museveni had in 1979 and 1980. This is why he needed years in the Bush to win a WAR. Peace.