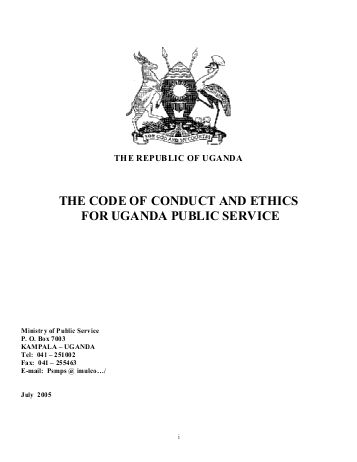 The National Resistance Movement ahead of the elections are saying to the civil servant, the ones working in local government and state organizations to support the government by default. Because, the officials of the NRM and the government are saying they are paying them. However, that is not true. They are not hired by the NRM, but by the Government of Uganda.

If Uganda is a democracy and there is free and fair elections. Than the state should be reflected all through the Public Civil Service. All walks of life should be there, both with faith and political association. Yes, there are laws that is barring the civil service from entering politics. As they are supposed to be non-partisan and work for the general public.

However, the statements made by Capt (Rtd) Tumusiime Bamuturaki, and the Resident District Commissioner (RDC), Lt. Col. James Mwesigye on Wednesday this week. Says a lot of their mismatched ideas of governing and governance. They are blending the ruling regime with who the government are.

The government and state shouldn’t be associated with one party. Even though it has been ruling it politically forever. Since, the civil servants should have the ability as any citizen to vote for whoever they feel and whatever they vouch for. They could vote for the opposition, though they are barred by law to be political active.

Still, the constitution allows them to vote in a free and fair election. The Constitution doesn’t state that they have to be loyal to the ruling regime. Because, the people is sovereign and they have the rights to associate themselves with any political party too. Therefore, the Public Service Code of Conduct article 50 is breaching with the ideals of the 1995 Constitution Article 29(e). However, is for some legal scholars to explain.

Still, any citizen should by default be allowed to associate with whoever they deem fit. If it is a clown, brothel owner, journalist, singer or farmer. Whoever they deem fit to lead and run the nation. They decide who they seem fit to do so. No matter what job they have or work it shouldn’t matter.

That shows how the intolerance of the NRM. That officials like Capt. Tumusiime and Lt. Col. Mwesigye is saying this. Not that it’s shocking. It is more of the same. However, it proves that the 1995 Constitution to them is only mere papers, but not law. Even if it one of their prides and joys. Which they don’t care to follow.

I’m sure these fellows couldn’t even find the article and explain themselves out of it. Nevertheless, they got to send warnings and intimidate civil servants. Who works for the state and isn’t something that is automatically for the NRM. The civil servant can decide on their own… they have a mind on their own and isn’t in debt to the NRM. These folks can decide and do what they feel.

The civil servants aren’t working for the NRM, but they are working for the state. That is a distinguishing difference, which the likes of Capt. Tumusiime and Lt. Col. Mwesigye isn’t able to see. Maybe their minds are jaded or the hunger for power doesn’t cease to boggle their train of thought.

However, these workers are free and can pick whoever they feel and rightfully so. If not, then they are slaving to master, instead of being human being with a free will. Which is something even the 1995 Constitution has given them. Peace.