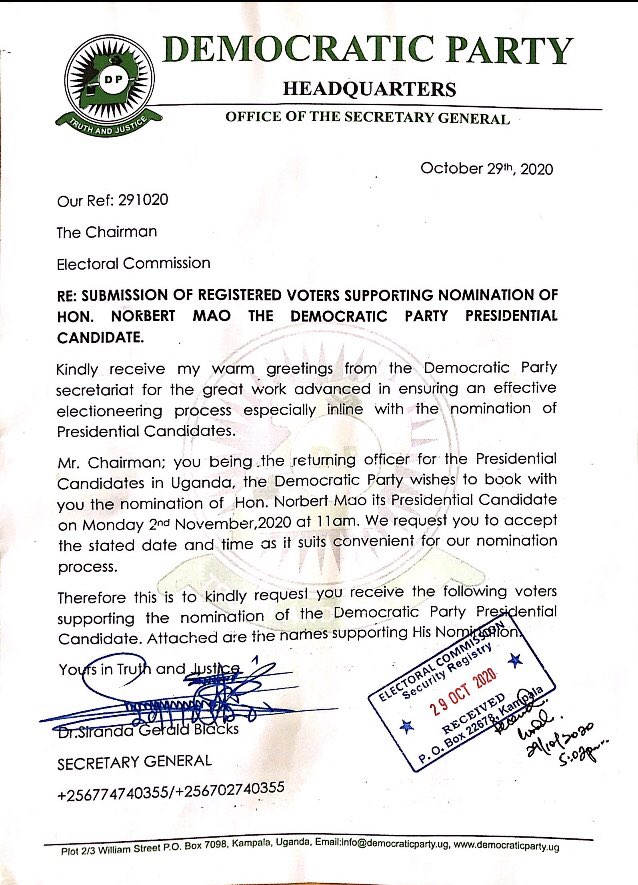 The Democratic Party President Norbert Mao seemed a little minute like they were not fielding a Presidential Candidate. This because the Electoral Commission didn’t have the candidate on the list. Just like other parties who was not on the listed to be verified and cleared. This is why it seemed like he wasn’t running.

Mao haven’t looked strong and his politicking ahead of the General Elections 2021. The Democratic Party looks more shallow and more of a side-show, than a well governed machine. This with a Party President in his third term.

The DP has already lost their trying out of DP Block or the Special Purpose Vehicle (SPV). These two combination have lost out. Mao have tried to become more important and a bigger star. However, it has fallen flat. He has lost his own MPs to both other opposition parties and to the National Resistance Movement (NRM).

Now, we have a sudden letter of intent from Mao and the DP Party. After everyone else have been open and vocal. It seems like he has waited as long as possible to unleash it. To make a flash in the pan.

Mao at this point has to battle the same moderates as Muntu. The thing is that Mao never have been directly challenged by a man like Muntu. They are in the same space and with similar behaviour. Mao have been out there on his own more than Muntu. However, Muntu is more respected and credible. Even if he will negotiate and have dialogue into oblivion, instead of actually make a change, which is needed asap.

Mao is neither ruthless or brash. Neither does he has the finesse or the ability to score high. The man has failed in two elections already. First in 2011 and totally abysmal in 2016. Now he returns for the third time and second time Presidential Candidate.

He has not seasoned like wine. Mao haven’t gotten better with the years. To be honest he was better in the early 2010st than he is now. It is like he has lost the spunk and the flair. Mao is running the same game and hoping it will give returns.

However, the main challenger isn’t Muntu, even if he is the man in the same space as Mao. Mao got to challenge Bobi Wine, which he cannot. The People Power Movement and National Unity Platform (NUP) have rocked the opposition. In a manner, which haven’t happen in a while. Besigye had popularity and people behind him. Bobi Wine has the same for this generation.

That is why Mao got nothing to give. His a lucky loser here. He will play, but will only loose. A nice mantle and fun games, but the cards he has is only good enough for bluff. As a Presidential Candidate in 2021 he can never win.

Mao could become someone in Gulu, even an MP representing Gulu. Nevertheless, he aims at the throne. A place where he got nothing to entertain and nothing to offer. Other than being a man who fights for the same secure space as Muntu.

Mao wants to be more. He wants to be the educated and wise brother. The former Guild President wants to be the elite and the modern nobility of the Republic. However, he got nothing to gain or to win. This is a losing battle, even before it starting.

It’s a tragicomedy and the main act is Norbert Mao himself. Peace.