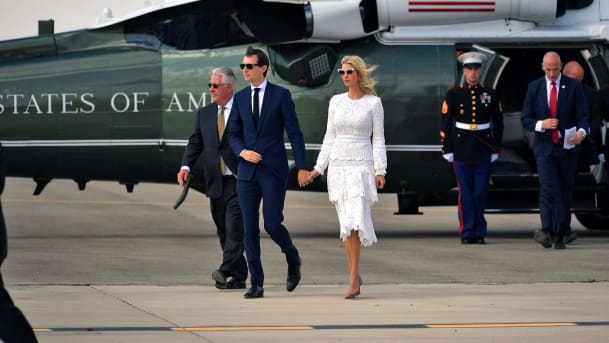 Jared Kushner the White House Senior Advisor and Son-in-Law of the President. His only there because he married into the First Family and married the favourite daughter of the President, Ivanka Trump.

Jared wouldn’t even had a thought or anyone caring about him politically if it wasn’t for the blessed gift of nepotism. He wouldn’t be hired to the White House and all the roles he has around the President. If it wasn’t for his family association.

Jared isn’t in Washington D.C. because he is well seasoned politician, educated and has progressed in life on his own. The only way he made it in New York and was able to run in Real Estate. Was that he took over for his father and participated in the same slum-lord business. That is what he does for a living and what the Kushner’s are known for.

With all this in mind, this man shouldn’t lecture people on ability to reach success. This man has gotten everything in life handed to him. Jared haven’t worked hard a day in his life. His a entitled douche who is trying to lecture African-American. That they are lazy and they could succeed too.

If Jared had been raised in Inglewood, Compton or in Long Island. Than, he could have proven himself. However, this man was raised with a silver-spoon. Raised in wealth and in the ranks of wealthy New Yorkers.

Kushner’s are these kind and the father paid him to a Ivy League school. Not because Jared has the skills, but because the father had the dough. That is how easy life has been and then he married into the Trump family. Therefore, he could enjoy the spoils of the White House and the deals made with foreigners to bankroll their life-style.

That is why Kushner should go off his high horse. This man should actually work a day in his life. Not like his a factory worker or even worked from scratch. Jared couldn’t even reason or understand the troubles of the middle America. He has even less of understanding of the minorities, which he tries to lecture on Fox News. He should call Ice Cube like ASAP to gain some knowledge.