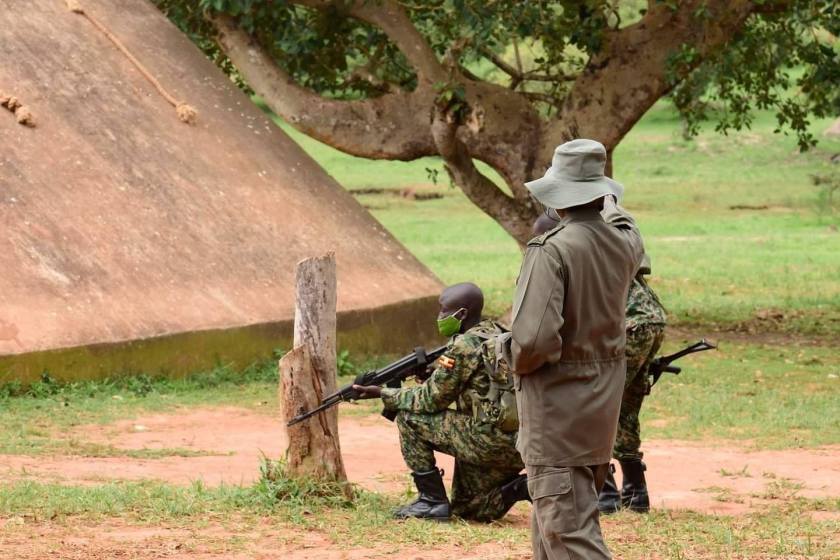 This is just like staple food. The President, the Head of State and the Commander-in-Chief Yoweri Kaguta Museveni are always posing with armed personnel, police officers and law enforcement ahead of the polls in 2021.

Soon, he will polish his rifle, wear an AK-47 and say he wants to crush his opponents. That is what this man does. Around the polls, the campaigns and such. He will warn, with stern words and use allegories to explain his position. The old man will use all means to address his opponents. While knowingly scare, intimidate and order force against them.

His allies will call them hoodlums, extremists and rascals. They are the ones who is to blame, when the tear-gas, the arbitrary arrests and extra judicial killings. The armed forces and the law enforcement will go hard towards the citizens who happens to attend or be close to the opposition candidates. That is just the way of life.

So, what the President does with this posing. Is not only to show his army, his soldiers and his police force. But trying to message that your not planning to mess with him and his agenda. You are supposed to listen and obey his command. If you don’t, then expect no mercy.

That is why he has the army, LDUs, ISO, CMI and so fourth to gather intelligence, get the wrong people into safe-houses. Ensure the public are silenced and intimidated. So, he can rule for life. Because, he cannot rule on popularity or love, but he can rule by the iron fist. It is with the power of the arms, the bullets and the possible he can run a nation.

Museveni is making sure of this. That is what he has and what he stands for. This is why his posing. Taking pictures and spreading the news of new enforcements. New trainees and officers to the rescue. To prove that the state is not only safe, but he has the force to combat anyone who pose a challenge. He got the guns, the trained personnel and the will to silence you. That is the message he sends.

He has done this before and now done it again. That is what this man does. Especially, ahead of another election. Just to prove a point. He just have too. He live by the guns and will die by the guns. Peace.