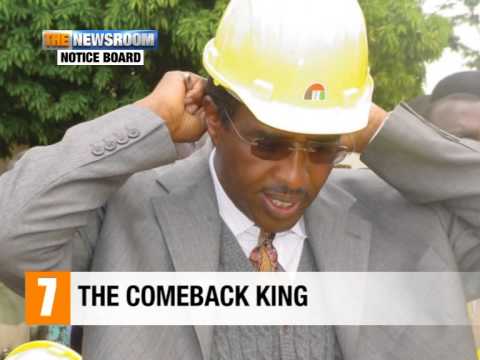 I don’t know about you, but there are some individuals who has shown what they are worth and has misused their office. One of these men are Maj. Gen. Jim Muhwezi. The In-Law of the President and therefore, has gotten of the hook. Because, the President cannot punish his own family.

That is even has stolen funds from the Global Alliance for Vaccines and Immunisation (GAVI), involved in scheming funds in the program of Universal Primary Education program. Under both times he served as minister of either Health or Education. He saw an opportunity to steal funds. Still, he was acquitted and not serving time. However, he lost the status of being a minister. But for a man of his cadre, that is just a slap of a wrist and moves on.

He has even bought junk helicopters and been known for robbing resources from the Democratic Republic of Congo during the wars, which Museveni approved off. Where Muhwezi could enjoy the spoils without any consequences. Alas, the reputation lingers on.

This sort of man, that is a walking scandal. A man who is willing to find any way possible to embezzle, steal and corrupt a situation. The Republic is better off, that his lingering and pounding on the loss of power. Instead of giving this man yet another chance to become a lawmaker and government official.

That would only be because of his relations. He has a name, his known, but not for the reasons a man should. Muhwezi and Mbabazi is known for the same reasons. They can land-grab, corrupt deals and take kick-backs to the oblivion. That is what they do. Its not me just saying that. This is something they had done all by themselves.

Jim, Jimmy or whatever have even a questionable past from the beginning of the NRM government. As the man in charge of Intelligence Services, as the Director General. Who was in-charge of the death of a witness or a person connected to the assassination of Andrew Kayiira in 1987. As he condemned the action of the ISO Officers, however, he still let the death of Kasirye in 1988 and a number of other prisoners died too. This all happened on his watch, as the Director General. It should not be forgotten.

With the knowledge of all this. Muhwezi shouldn’t be suited for another term in Parliament. There are so much he has done. When you have a public record and known for certain things. Know that it will haunt you.

Muhwezi your ills, your plundering and your corrupt behaviour should catch up with you. It should not be a trait that get you re-elected. Neither, should be an in-law to the President be a secure way of getting a ticket and become a returning MP.

Jim should answer for his old crimes and connection to shady activities. This should not be glossed over or forgotten. He can pay some ignorant influencers now, but his past will haunt him. We all has to ensure these old acts get in the spotlight again. So, that the ones voting in his constituency chooses differently. Peace.