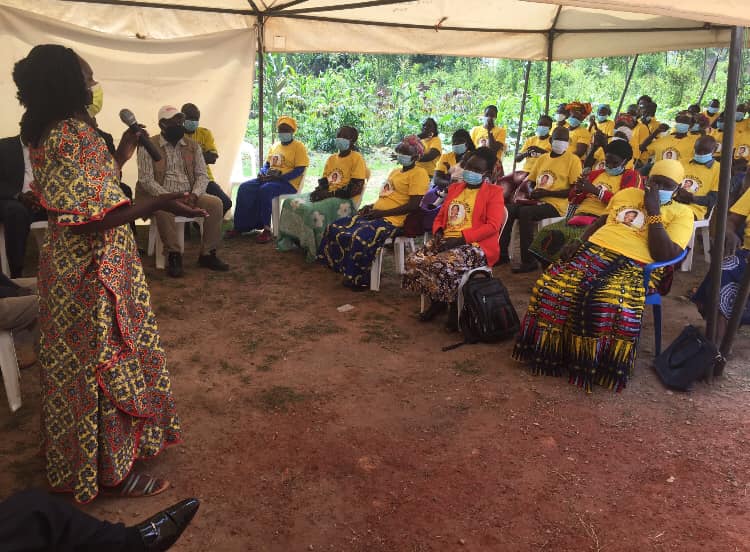 For the ones thinking social distancing, lockdown measures and COVID-19 isn’t a nice sideshow for a “Scientific” election. Sorry brother, you were wrong. The National Resistance Movement (NRM) and its allies can campaign in the villages, towns, give away gear and even occupy churches for rallies.

That is now proven over the last two weeks. Several of ministers has been busy “campaigning” using government programs. Suddenly speaker Kadaga is in her district giving away masks. Minister of Justice Kamuntu holding rally in a church and in a yard. A State Minister for Health Aceng holding a rally in a sub-county in district, where she the flag-bearer in the election. Also, Minister of Gender, Labour and Social Development Tumwebaze held a rally for SAGE too. Minister Kasolo have been holding rallies in the name “Emyooga” too. All of this is happening and we are supposed to believe this all part public official work.

However, the opposition can nearly participate on radio shows. Without the police officers coming barging in. Opposition parties cannot hold press conferences at their offices without being raided. Opposition parties cannot met activists at own party offices up-country without getting their MPs arrested. This is all things that happen in the same window of the Ministers holding rallies.

Meanwhile, we are supposed to cheer and joy for the Movements opportunity to campaign. They are using all tricks of the trade. While the policing of the opposition continues. The opposition cannot do anything without meeting police officers. This is a renewed Public Order Management Act (POMA) just under Presidential Guidelines of Lockdown during COVID-19. Which is supposed to be supported by scientists.

However, the same people who are running the guidelines are breeching it and not begging for mercy. The same folk who are closing venues, churches and public rallies are holding the exact same thing. This is really showing how blind-sided the Movement is.

They are thinking people are so stupid, that they are not understanding or grasping the issues at hand.

This is electioneering before the Elections Road Map and scientific measures that was put in. Therefore, the concern for spreading COVID-19 cannot be that big. When the Ministers are all up in people’s faces and holding rallies. While, they are closing everything else for everyone else. Unless, they are immortal and super-humans, the sort who cannot spread the virus nor be asymptomatic. These MPs and Ministers are so special, that they are above the law and above the fear of the coronavirus.

Everyone else has to be frightened and are in danger. They are not like these people and they are unique, they are special and true VIPs. These folks would usually have the ability to travel abroad for healing. The rest have to go to a hospital with lacking equipment, staff and enough ICU beds. That is just the mere reality.

If the state was worried about the COVID-19. Its high ranking officials wouldn’t campaign on a regular. If the state was holding free and fair elections. The opposition would be able to do internal party works and also prepare for 2021 in a fair manner. However, that is not true. The opposition cannot hold rallies or do their thing. Nevertheless, the Movement can do whatever it want.

That shows the injustice and impunity of the state. They are just misusing their power and reign. It is so obvious, that’s its foolish at best. Peace.