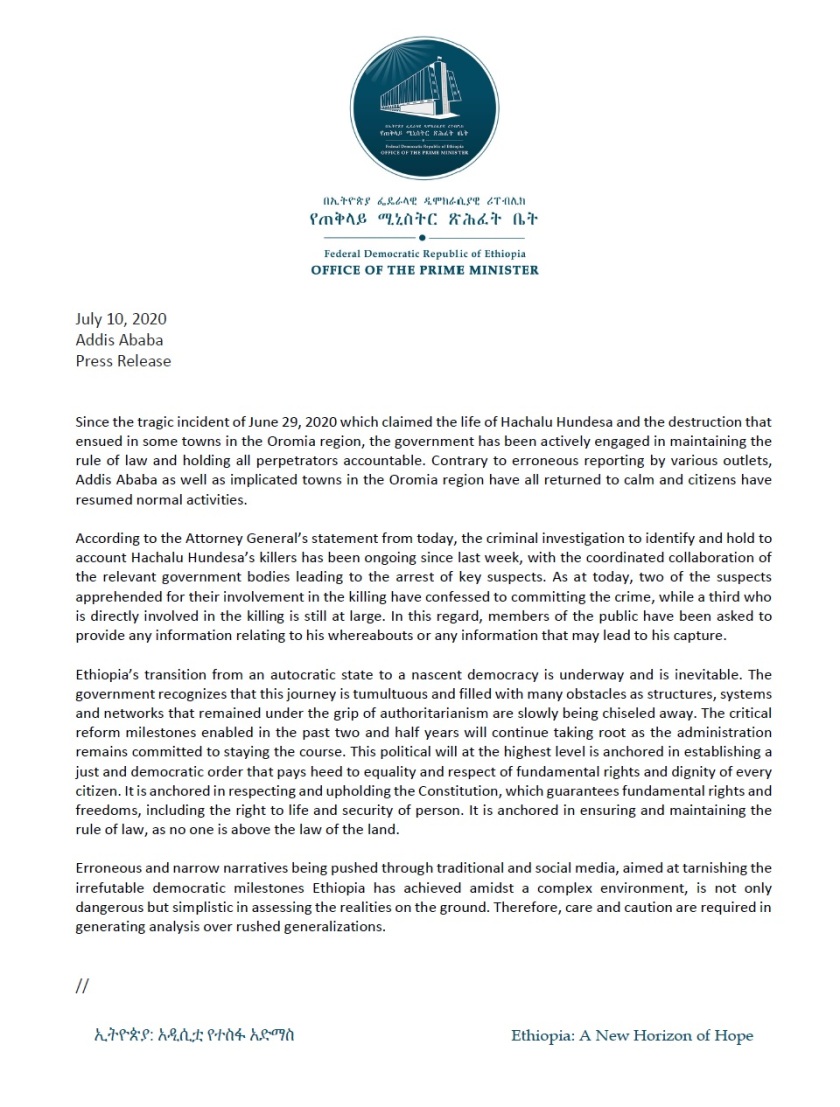 The assassination of singer and activist Haacaaluu Hundeessaa on the 29th June 2020. The authorities have used violence, arbitrary arrests and extra-judicial-killings. With this in mind, the Republic and its leadership needs to fix and spin the narrative. Because, the government doesn’t want to be looking like blood hounds and atrocities towards own citizens.

The Prosperity Party and the Prime Minister Abiy Ahmed Ali wants to look golden. The Prime Minister wants to look the like the future, the promising and the reformer. Abiy doesn’t want a stain on his record. However, the arrests of both the Tigray and Oromo leadership shows what he does. Not to forget the deaths of 260 people and 3500 arrested. While the unofficial numbers are 1,000 killed and 5,000 arrested.

That is why the man wants to look wonderful, but the reality is sinister. That’s why the government blame either outside forces or the TPLF. The government cannot be to blame, even if they have all the arms, bullets and orders to oppress the public. That is why the state uses Command Post in Addis Ababa and the Oromia Region. With the knowledge of this, it is outrageous that they are trying to spin it.

Like they did in the most recent press release by saying this:

“Ethiopia’s transition from an autocratic state to a nascent democracy is underway and is inevitable. The government recognizes that this journey is tumultuous and filled with many obstacles as structures, systems and networks that remained under the grip of authoritarianism are slowly being chiseled away. The critical reform milestones enabled in the past two and half years will continue taking root as the administration remains committed to staying the course. This political will at the highest level is anchored in establishing a just and democratic order that pays heed to equality and respect of fundamental rights and dignity of every citizen. It is anchored in respecting and upholding the Constitution, which guarantees fundamental rights and freedoms, including the right to life and security of person. It is anchored in ensuring and maintaining the rule of law, as no one is above the law of the land” (OPM, 10.07.2020).

Using the reforms as a shield to enforce injustice and impunity. That is what the Prime Minister and the government does. They claim to stop authoritarianism, but using the means of that to arrest and kill citizens without proper cause. It is really dubious at best. A method of using the law against the public and protestors, but not taking accountability for own actions.

It is hard to see how the Federal Government is respecting the rule of law or constitution, as it so easily can take life and arrest people. It seems like the Prosperity Party is above the law, when they can order these sort of orders on the citizens. While the opposition leaders in Oromo and Tigray is behind bars. The burning of houses and other vicious acts of the government should be addressed. Instead, the state only looks into the citizens who doesn’t have a voice or a outlet to let out grievances. If they do, then they will suffer. Peace.