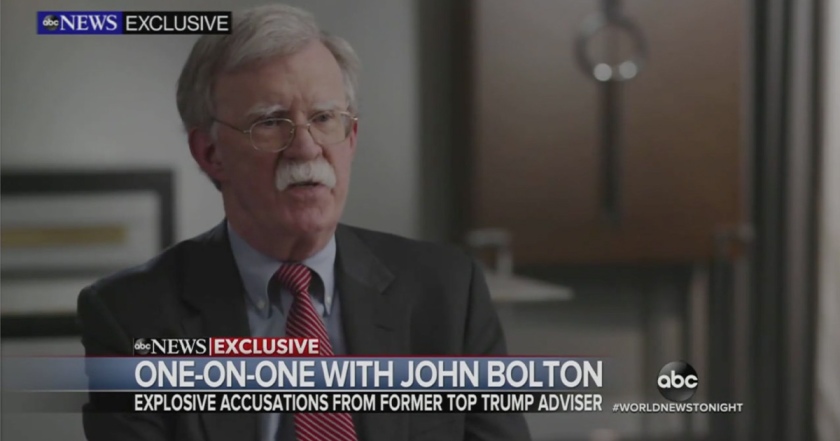 I have never liked John Bolton. No matter what administration in the United States he has served. He has been a war-hawk and someone who intend to bomb other republic’s to oblivion. Because he can and because the US has the military power to do so. Bolton is not a noble man, but his not a traitor, even if Secretary of State Michael Pompeo call him that. He just issued dirty laundry in his newest book and it has hit the pride of the White House.

I find it really interesting that an administration where the Head of State is always asking for electoral interference and help to win from foreign forces is calling someone a traitor. I thought the treacherous to have foreign powers to interfere in elections and state affairs. That is what the President has done plenty of times now and he was even impeached for one instance. Another one was the investigation of it with a Special Counsel to look into it.

The book of Bolton proves there is a third party where the President has asked for help to dig up dirt and make issues for the opposition candidate Joe Biden. He has now worked with Russians, Ukrainians and now the Chinese. Soon, he will do another call Putin to get WikiLeaks and Guccifer back online to drop intelligence on the DNC again. Since that is what he do and get away with it.

President Trump and Pompeo can call out names, but its their pride that Bolton aired out his thoughts, his stories and his time in office. Just as its campaign season ahead of the November elections. Its weakening him and making him look even more fragile, than when he went into bunker during demonstrations.

Trump cannot deem Bolton as traitor, because there is no proof and no charges put on him. Not like with his personal lawyer, campaign manager and who else of his associates that been hit by the legal system since he took office.

The White House should be a bit more careful. There been enough secret meetings and revelation of sketchy behaviour, which is done in secret and revealed during investigations. That’s why even the proud Penguin aka Roger Stone was also charged. There been so many in and around the President that has gotten into legal jeopardy. So with that knowledge, even having a foreign agent not registered working directly with a foreign actors without telling. That being Michael Flynn who was at one point National Security Advisor. Also questionable meetings with the incoming Attorney General Senator Jeff Sessions, who held secret meetings with Russian ambassador. It so many instances where associates, people in-connection with President has held talks and solicited intelligence from foreign powers. That should be put into question of treachery.

With the knowledge of that and the history of this administration. They should be careful to pin anyone else as treacherous. As they themselves are having no issues or quarrels asking Russians, Ukrainians and Chinese to help them out. I am sure the President would ask help from Turkey and others too, if they had any suction. Because that is the sort of man he is. He can be a villain and act in a manner, which could be deemed as treacherous. However, he gets away with it for the simple reason. There are too many scandals to follow one after the other.

The President and his Secretary of State should do this to Bolton. Unless, they want to take accountability for their own actions. If they want to be transparent about how they have used all channels to get information and help with the elections. If all information of that came out. It would be a shit-storm, because the investigations into it has only skimmed the surface. That’s for the reason of blocking information and shielding release of documents, call-logs and transcripts. The secrecy proves there are more than what this administration wants the world to know.

I got nothing good to say about Bolton. His times in office is of a creep and a war-hawk. I’m not the kind of person that wants those sort of men in office. However, I am not the man who appointed and gave him an office. That is what the President did, just like he gave and appointed other questionable individuals to his cabinet as well. Therefore, he should more careful and maybe even vet them better. We all know that wouldn’t happen, because then his corrupt cronies wouldn’t get a place.

This President and his team better act wiser. Not to throw around the allegation of treason, as he has acted upon that and request things that could be deemed fit for that himself. That’s why its a double standard in this regard. Enough nonsense. Peace.