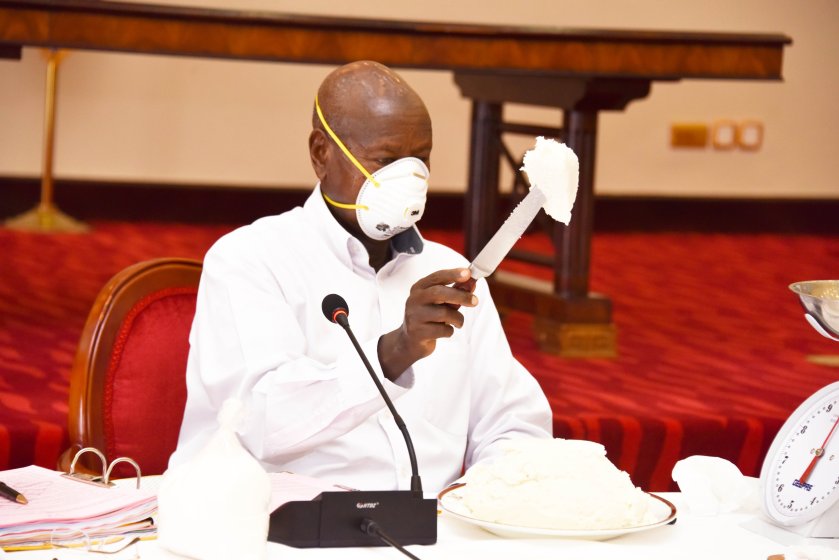 “I had earlier consulted scientists on how much food calories an individual can consume in single day sustainably and they said 250g of posho would be of enough calorie composition for a single individual intake. Now is the food being distributed enough? It is optimum, if we can ration the intake with mind that we can not consume as much as we have always wanted, but can survive on an economical consumption” – Yoweri Kaguta Museveni (18.05.2020).

On the 9th April 2020 the President dropped his work-out video from the State House. Where the old man ran like a maniac inside his huge office. An office, which are bigger than most people’s houses. The President also did some weird push-ups, which was more ass movements than his body. If you have seen the clip posted on Facebook in April. You know what I mean.

So, today his handlers had a grand idea, as his advisors also postponed like his 14th National Address during the COVID-19 Lockdown until tomorrow. Well, that didn’t happen. He changed it again and did it directly after the showing of posho.

They had the brilliant idea of him weighing posho. Show how much posho or ugali its in the given bag of COVID-19 Fund to the general public. Not to forget to prove by weighing the food to prove how much you should eat peer day. Because, that is useful.

The way he did it and showed it. Was like a mockery cooking show. Where he living lavish in abundance. With more helpers than Santa Claus. The man whose the Commander-in-Chief, the Fountain of Honour and His Excellency. Trying to teach the masses how much Posho they should cook everyday. Not like this is an extension of the various dietary needs nor in explaining how a family supposed to live on it.

We didn’t expect the state to deliver full course meals from takeaways. Neither dropping samosa’s or chapiti’s. However, the Head of State should consider his role in this. That he hasn’t sufficiently thought this through. As this only display is micromanaging and mismanaged hack-work he does.

Since, this is the sort of work his MPs gives praise to. Cutting and weighing posho. Just like they were so proud of the man running around like Mad Max in his Office last month. The President should enlighten the public and ensure the public get their nutritious meals.

Just like with the running video, where the road-runner went lost around the desk. His now the big chef of Posho. He went from Running-man to Posho-Man, his still not the Pusha-man. Give him time, maybe he will get there too. It’s more of the white, I suppose.

Well, enough of this nonsense. Peace.