Opinion: No ballot will beat Museveni 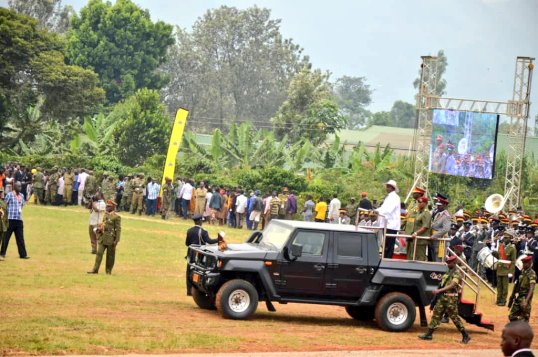 Debatin’ whether or not you can even weather the storm

As you lay on the table, they operatin’ to save you

This here will be short and brief as possible. There are just so many ways you can say the same thing and publish similar content. However, I does this as people are gearing for voter registration and election road map for the General Election of 2021. Thinking there will be possible changes in the Republic by forcing another election.

I hate to break it to you. If you don’t know, you will know now. That President Yoweri Kaguta Museveni and National Resistance Movement (NRM) cannot be beaten though elections at this point. That is impossible. It has to be godly intervention, of a demigods or simply a divine invention. Which would change government and head of state. However, we will be lucky if God intervenes and uses his will to give way to others. Nevertheless, we can pray, but don’t anticipate that he will answer us. Since he has given way to Museveni since 1986 and we just have to patiently wait.

That is why, the man whose appointed everyone since the 1980s. Who has kicked the army into gear. Who has the all the intelligence operations, configured the laws and owns the state. The President who micro-manage every single thing and deal with foreign investors. The man who runs it all through decrees and presidential handshakes. Will not be brought down by an election. He will not risk it in a fair fight. He never will, he doesn’t have the courage or the balls to do it.

He will use fear, intimidation and rig it to oblivion. The NRM, the government of Uganda and Museveni. Will spend money on the elections like it is no tomorrow. Pay off friends, enemies and even some foreign strangers, to legitimize and secure another term. There will be usage of all tricks within electoral malpractices. There will be extensive force against dissidents and civilians who dares to stop him. They will face the brutality and force, which should be used to enemies, which would plan to invade the Republic. Instead it is used against their own, as they are not loyal to the President and his cause. Himself.

The ballots will be boiled, cooked, screwed and manipulated. No matter who you vote for, it will be configured to fit the narrative that the President needs. He will have the Parliamentary majority. He will have a big win over the other presidential candidates. All of them will fall like dominoes.

The numbers will not make sense, the voter registry and the Return Form for Declaration of Results. Which will be differing from polling stations and the final results of any given district. As there is never any clear guidance and the sense of it all, as the gerrymandering and the curving out districts out of sub-counties will create even more a headache of how its supposed to be.

This is all made to ensure the President and his men. The royal court and his loyalists buddies, will all be greatly provided for and secure a seat at court. There is no way in hell, that anyone will kick him out. Unless, the army goes against him and get tired of paid cents on the dollar. That they are tired of killing their own, silencing and intimidating their neighbours. Because, at some point the generals, the lieutenants and everyone else will act on a righteous cause.

We just have to patiently wait… since there is no sense to believe that the ballot will bring down Museveni. It will not… If you thought to, sorry, but not sorry. Peace.