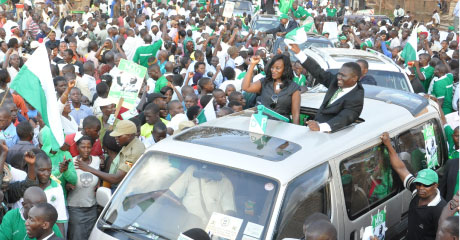 “I’m on the pursuit of happiness

I know everything that shine ain’t always gold

I’ll be fine once I get it

It sounds like fiction that Democratic Party President Norbert Mao, which is in an internal fracas. A man whose excluded part of his party and is entangled in an internal battle over whose being the Presidential Flag-bearer of the party.

This was the report by NBS Television yesterday:

“The antagonistic group against Norbert Mao’s decision to dismiss Sulaiman Kidandala as the National Organizing Secretary, has revealed that the party’s National Council resolved to support Kyagulanyi, a decision that has been rejected by Mao” (NBS Television, 15.02.2020).

“The only way to be happy is to be happy. That is a state of mind within your control whatever you are doing. It doesn’t require a new Ferrari or an extension to your dangly bits. Happiness is not a pursuing, it is a being. The harder you chase it, the further you push it away. It can be likened to chasing a butterfly. The more desperately you charge at it, the more it will elude you. But if you stop trying so hard, lay down on the grass and relax, there is a chance it will just come and land on your shoulder” (Norbert Mao – ‘On Happiness’ 16.02.2020).

It is like the intellectual Mao doesn’t understand the predicament his in. Like he doesn’t get the hardships of what his doing. Instead of acting sincere, his trying to rebuild the party around himself. As he anticipate to be Party President for another term.

Mao shouldn’t act this way within the Internal Party wrangle. Last round he lost hard and went after the butterfly called Amama Mbabazi and the Democratic Alliance (TDA). Before that he ran on his own ticket and didn’t actually succeed on that one either. However, that was first round and total failure in the second. Then thinking he will be a booming star in the third is a bit far-fetched isn’t it?

Mao should wonder why his where his at and why the party is so split. Not only has he let this happen with fractions working directly with the National Resistance Movement (NRM) and even becoming cabinet members. While some DP has become part of the People’s Government and working directly with dr. Kizza Besigye. Thirdly, some has associated them with Robert Kyagulanyi aka Bobi Wine and the People Power Movement. Which is now splitting the party.

We can really imagine that Mao could be happy about being second fiddle to Bobi Wine. That someone like him took his way. Even if by the Lords of Mercy would even grant Mao an MP slot in Gulu. He should praise the Gods for that alone. However, his always aimed at the stars and the moons, even if he never had space shuttle to get there.

Now, we are seeing the sounds of happiness from him. Even if we know it is a nightmare. Because, it shows his double standard. Mbabazi was fine and dandy, but Bobi Wine is not. Maybe because he was barred from entering in 2016 and can now in 2021. Nevertheless, it seems strange, as it was not like Mao did magic in 2011. This from the man complaining that Besigye is a serial loser and Mao haven’t even won pop-tarts in his hey-day.

Mao become the DP President and he had been the Guild President at Makerere University, but that doesn’t deem him fit for the Presidency. Neither does he have the popularity to even get there. The party haven’t been built better under him, neither proved it value in the opposition. Unless, you count the amount of times Mao has been sitting on NBS Frontline. Than, you can say his winning. Also, the amount of times the papers publishes his writings.

With all of this in mind. Should Mao be happy? No. He should work like crazy, salvage whatever he can. Because its not like he got the golden goose. Not like he got the loyal standing or stature. Mao might have a few cronies around him and some central leadership backing him blindly. However, this will not save him. As the waves are turning and his importance isn’t all that.

Mao will not be happy about that, but that is the reality. Maybe, he can quote someone else philosophical book and call it a night. Peace.