Lesotho: A Love-Triangel ending in Murder 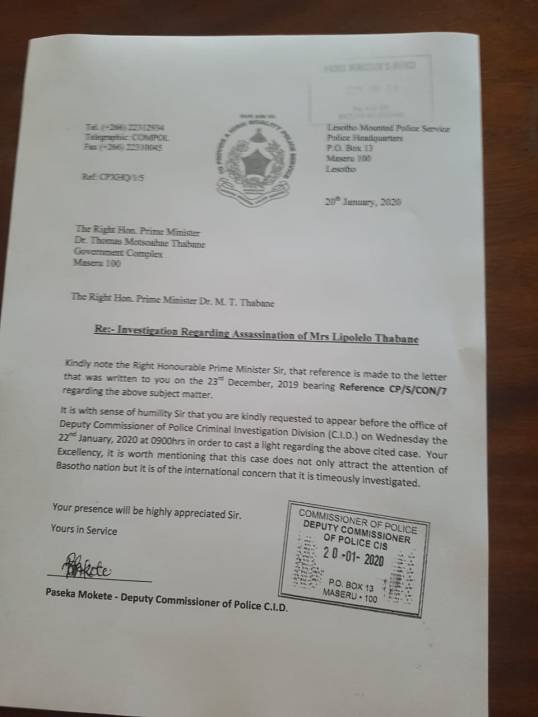 The Second Wife Lipolelo Thabane were assassinated on the 14th June 2017, two days before the inauguration of husband and in-coming Prime Minister Dr. Thomas Thabane. Since then the mysterious events haven’t been resolved.

Therefore, the speculations about the murder has lingered on. As there was a Court Battle for who was deemed the First Lady, either the second or the third wife of the Prime Minister. However, that was still pending in the courts, but she was later shot down. While the third wife Maesaiah Thabane been a person of interest. Now, tomorrow the former Prime Minister is also scheduled to meet the Police whose investigating the matter.

What is even more intriguing in the matter is that communications from the Phone of the Prime Minister has been intercepted at the murder scene. As his communicated with the ones who possibly participated in the killing of his second wife. That’s been reported by Lesotho Police Chief Holomo Molibeli:

This whole thing is straight out of a movie. It is the political action movie with in-coming Prime Minister. Hiring assassins to save himself from bloody love-triangle between himself, his former wife and his new wife. While the Courts was having pending cases on it. Also, using the phone to call that, as well as finalizing things for his own inauguration. Therefore, his bloodstained hands would be on the seal and official podium. That is just like a movie.

Fiction and real life are sometimes not far apart. That the Prime Minister has to answer the investigations and the calls he made in 2017. He will not be all high and mighty for long, as he has promised to step-down and resign.

However, this tale is not over. As the Prime Minister and third wife has to answer for their role in the demise of Lipolelo Thabane. The couple both have to answer her death. Usually in manners like this, its either the previous spouse or the love-interest. If you watch the series Fatal-Vows, than you knows this. This is a tale as old as sin. Nothing new, just a new murder case in Lesotho whose causing headlines, because of the ones involved in the matter.

We cannot be shocked that this happens, as the ones with power are used to get away from their sins. However, this time seemingly he doesn’t and he got to answer. As there are some evidence pinning him and therefore, he got answer the coincidence.

We cannot know why, but usually humiliation and love-interest sparks more fury that anything else. Secondly, a woman scorned might bite. Nevertheless, at this point we don’t know, even if there are indications of people involved in the murder. Peace.