A Bridge too far: Bobi Wine dropped off at Karuma Bridge! 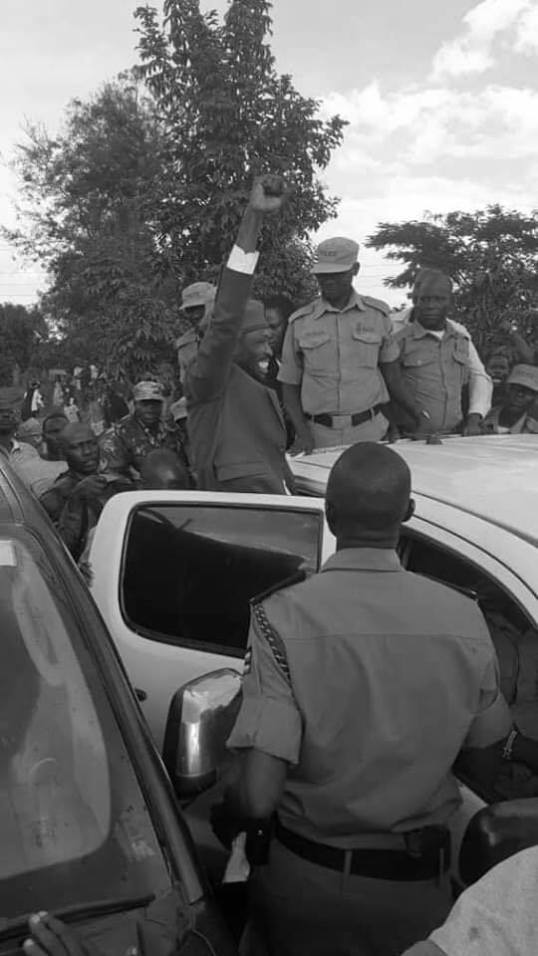 After yet another hectic day, as the police force arrested Robert Kyagulanyi aka Bobi Wine. As he attempted for the third time to hold his consultation meetings. This time it was in Lira, but the RDC and the Police Force didn’t allow him. Instead, they blocked the venue, tear-gassed Lira and used live-bullet too. While whisking away the MPs and Bobi Wine.

Therefore, for most of the day. We had no idea where Bobi Wine nor his comrades was at. Finally as the day closes and its been long. His been dropped at Karuma bridge, which is on the end of Murchinson Falls National Park and close to the Bobi-Masindi road or the Kampala-Gulu Highway. So, as a landing site for him to go back to Magere and Wakiso its golden one. However, this is not the way he wanted to return.

As of today, his been blocked in Wakiso district and Kasangati. His been blocked in Gulu and in Lira. Also, tomorrows consultation meeting in Adjumani has been blocked, as the venue has been intimidated and has denied Bobi Wine entry just like they did in Gulu the other day. Therefore, the events unfolding shows a pattern. As in three days his been arrested twice by the Police. By trying to facilitate and plan his own campaign for 2021. Which is practically impossible, even as he follows the guidelines and the codes.

It is ironic and sad, that his summoned to the Electoral Commission tomorrow, as his fourth attempt of consultation meetings is thwarted. It is like they are doing it all on purpose. There is always something wrong, the air is to tight, the flexing of MPs and the red berets are not correctly put on their heads. They got dress smart, look like gentlemen before entering a town and village. The police are saying they are savages and unkind people. At least that is how they are acting towards them. Like the People Power and associates are hoodlums and gangsters peddling crystal meth and heroine. When all they are trying to do is talk and meet. Exercising their rights to plan their campaign. Which is Tom Cruise’s Mission Impossible franchise on steroids.

I’m sure at this point, the only way he can get into a venue to hold consultation meetings is being an action hero. Jumping directly from helicopters through the windows and barricades. Be a little bit of John Rambo, John McClane, Stacker Pentecost, John Shaft, Mace Windu and Chev Chelios. He got to be adventurous and show his flair. Poke the dragons and bite at the tigers. Because, it is not like they letting him enter into the front-door of any house of God or Hotel at this point. They are making places into war-zones and silencing the owners. Which the “Team Robert Kyagulanyi for 2021” have booked time and place for him.

That is why, the cowardice and the lack of rule of law in his concern is striking. Bobi Wine isn’t alone, his not the first, but the orders are clear as day. The actions of all public officers and police is evidently, make it impossible and stop his politicking. His not allowed, he doesn’t have the visa nor the blessing from “high above”. Bobi Wine hasn’t the powers of the anointed ones and neither their backing too. Because, his the stark contrast to the State House and the NRM. That is why they block him and detain him.

Even as of today, they used most of the day wasting time. Instead of having a certain plan of the drive and such. They used all day driving from one place to another and suddenly dropping off without any knowledge of the media and such at Karuma Bridge. Which by some calculations, if driven straight with no traffic is about 1 hour 15 minutes to reach from Lira. We know, that they took other routes than that. Since, Bobi Wine and associates was gone for hours. Who know what they could have done and such.

But this is the third day was useful for one single thing. It exposed again, the truth about the “democratic values” of the NRM and Museveni. Peace.