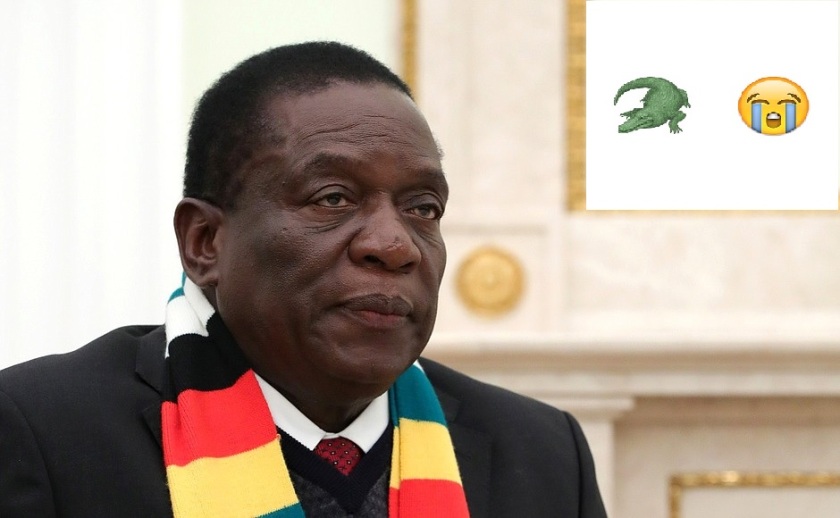 “For structures to work, those of us who put them should respect them, especially when they pass a ruling. I am now going to politics: We had our elections, after those elections, you don’t tell yourself that you have won. Other people are the ones who name the winner. If you enter a race … and you run the race and you get to the finish line, you don’t go there and say it’s me who won, there are other people who announce the winner … these are the institutions that regulate how people live in the country. Now when you can’t listen to the institutions, you will have disobeyed God, because he is a God of order” – President Emmerson D. Mnangagwa on the 2nd December 2019

This President and Head of State is something else, instead of actually acting supreme and delivering to the public. His bitching because the Movement of Democratic Change – Alliance (MDC-A) Nelson Chamisa and his opposition party haven’t legitimized President Mnangagwa and Zimbabwe African National Union – Patriotic Front (ZANU-PF). Seriously after the election in 2018 and the November Coup d’etat in 2017.

Still, the former Lacoste and handler of Mugabe needs the blessing of Chamisa. Who would know the ego of this man is like this. Surely, its not enough that his forces sends soldiers and police officers to the venues of the MDC. That they block, arrests and silence the opposition. Hurt civilians and oppress the opposition.

Mnangagwa should know this, his continuing the ZANU-PF ways of going after activists and opposition leaders. It fires doctors doing industrial action against the incapacitation of the health workers in the Republic. Over 90 days without a decent salary, as the economy is tanking and the financial policies not working. The raising inflations, the lack of stable currency and lack of foreign exchange.

Still, all Mnangagwa does is complain that Chamisa doesn’t love him. Chamisa is supposed to have a man-crush on Emmerson. I’m just kidding, but that is how it seems to be. This coming from the same head of state, that sent soldiers to the streets and killed civilians for supporting Chamisa in the Post-Election timeline. After that put the blame on Chamisa and even made the MOPO Act to control the opposition ways of demonstrating and easier to block these. In effect, being worse than his predecessor.

Still, Mnangagwa is saying Chamisa should say: “Mnangagwa is ruling by the honour of the Gods, the grandest and highest servant of the angels from Heaven. The man whose ruling the Republic with the mercy and the salvation of Christ. The man whose reign I shall bless, because Gods says so”.

Well, that will not happen. Neither, is the President acting Godly, worried about the subjects of the state, the citizens nor their well-being, as the state is depleted, the state is broken and the lack of due diligence is everywhere. Instead of securing the basics, like food, shelter and goods, the state is hiring private planes and spending fortunes on “Command Agriculture”. That is just the merciful acts of Mnangagwa.

A man who came by the gun, who will die by the gun and who will automatically expect people’s loyalty. Even when its not deserved or something earned. His only fortune, expect for money is fear. The levels of fear and intimidation is at another level. The President who uses the military and police to monitor and control its enemies, will default at one point or another. The police state and the lack of rule law, will sooner or later haunt this administration.

Mnangagwa might claim its his “God-Given” right to rule, however, that was given to him by the army and loyal allies within the Lacoste. It wasn’t given to him by the Saints nor any of the Angels of the Heavens. No, it was the guns and the will of the army. That shall not be forgotten.

Mnangagwa better cry his crocodile tears. He will not get the stamp of approval from Chamisa. His party headquarters are raided, his fellow allies arrested and so-on. There is nothing the state doesn’t do. Therefore, to ask Chamisa is insane and foolish. It is weak tea and shows that Emmerson needs a ego boost. Because, he knows his fate to rule isn’t forever. That’s why his renaming himself and getting his name on streets. Something he can leave behind, because he cannot leave a legacy of greatness. Since the is none.

The tears might hit his chin, but don’t feel sorry for the man. Feel sorry for all the people struggling to get health care, all the citizens who lacks water, all the citizens who cannot afford basic commodities and who also suffering with their food security. It all because of this man, a man who thinks he should get all glory, but that will not be his story. His acts and together with ZANU-PF will be remembered for everything else. No propaganda can overshadow the grim and dark situation the Republic is in. It is just a matter of time, before he reality hits the upper-echelon and the tragedies get viral. Than, the President cannot beg anyone in his Republic, but he has to go begging abroad to save his ass. Peace.