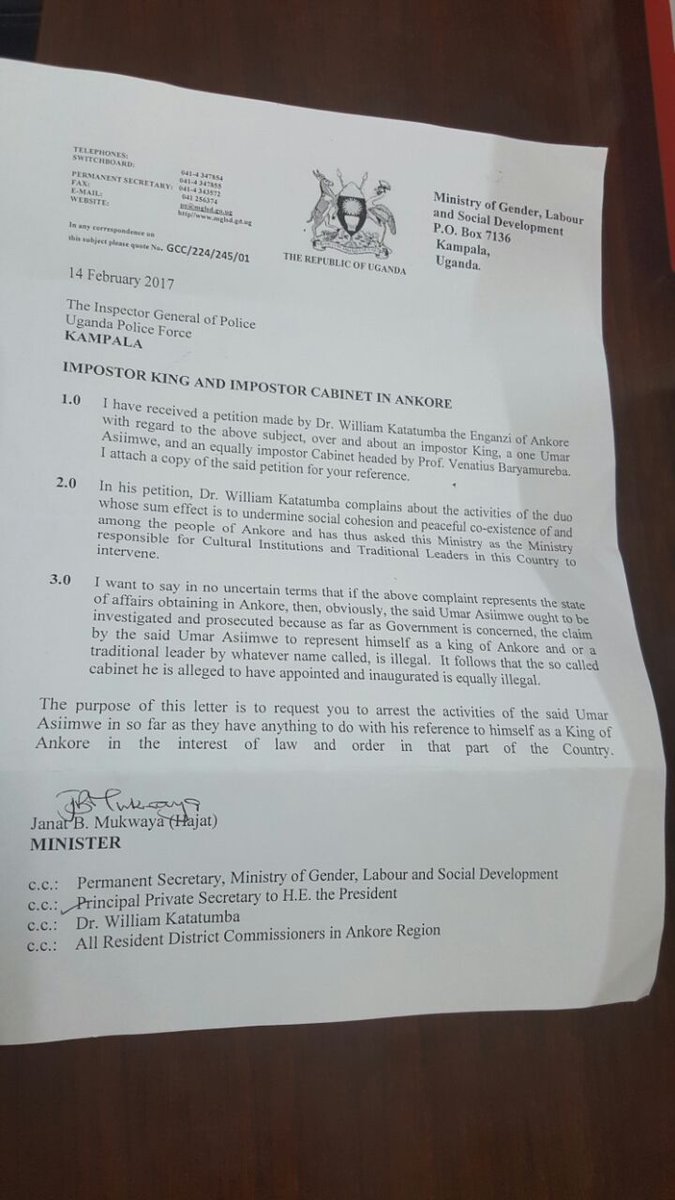 “He has always wanted to build a monarchy; you know he calls himself the Ssabagabe (the king of kings) and he cannot be the Ssabagabe without having full control over land.” – Wilfred Niwagaba MP

There are a reason why we are here in 2019, as the 1993 restoration of kingdoms should have made it possible for the Nkore or Ankole Kingdom to be recognised. However, the President, His Excellency, the King of Kings (Ssabagabe) cannot have foe within his community. That is why there are no other recognised in the Ankole. It is very simple math, that the President cannot share power with someone in his own homestead.

That is why President Yoweri Kaguta Museveni never accepted the coronation of Prince John Barigye in 1993. While he still was speaking whole heartedly about the royal traditions and the cultural aspects of the kingdoms, as he recognised others. That was surely to get way and get more popular in other regions, but he doesn’t need that in Ankole. Where he feels secured and doesn’t need the other groups to have another leader to look up too. Except for himself. The King of Kings, shouldn’t have another king to battle for supremacy.

Just look at these pieces to the puzzle.

Snippet of a speech:

“Our ancestors faced the challenges before them with imagination. I am always fascinated by the story I was told by my late colleague Haruna Senkubuge of Rwenkongyi, Ssingo, while in the bush. He died in 1984 of natural causes. He told me that following the war between Junju and Semakokiro which resulted in some Baganda fleeing to Ankole and Toro where they became Banyaruguru and Batagwenda (who are now Banyankore culturally), the clan leaders resolved “Not to allow the princes to disturb their peace again on account of power struggle”. They realized that the main causes of trouble were the maternal clans to the princes with each clan wanting their prince to succeed on the throne. They, therefore, decided to “Imprison” the Princes at a certain Amphitheatre known as Olunnya, somewhere in Mpigi” – Yoweri Kaguta Museveni – ‘Statement by H.E. Yoweri Kaguta Museveni on the occasion of the Opening of the Lukiiko, Bulange, 2.8.1993 (02.08.1993).

“On November 20, 1993, Prince John Barigye had a coronation at Nkokonjeru Kings Tomb grounds under the guise of funeral rites for his father Sir Charles Gasyonga II. President Yoweri Museveni annulled his kingship, claiming it was done in the dark and did not have popular support as the constitution demands” (Alfred Tumushabe – ‘The King without a throne’ 21.10.2011).

Meeting with the President:

“Kampala — A fifty-man delegation of monarchists from Ankole is scheduled to meet President Yoweri Museveni today at Kisozi farm in Gomba, Mpigi to further negotiate restoration of the institution. The President’s press secretary, Hope Kivengere yesterday confirmed that the meeting is to take place. However, she said that it is the monarchists who requested for it not Museveni. “These people are going to meet the President tomorrow (today) at Kisozi,” she said on phone yesterday. The meeting which also seeks to return the former Kingdom’s properties has been postponed twice. The delegation composed of members of the pro- monarchy Nkore Cultural Trust (NCT) and are from the sixteen counties of former Ankole kingdom” (Jossy Muhangi and Michael Sentongo – ‘Uganda: Ankole Monarchists Meet With Museveni’ 30.09.1997, New Vision).

“PRESIDENT Yoweri Museveni has warned the people agitating for the restoration of Ankole Kingdom to stop using bribery. The President said he had received reports that some district councillors in the region were bribed to support the restoration. He threatened to order the arrest of anybody using money to campaign for the restoration of the kingdom. Museveni was on Sunday addressing Bushenyi leaders at the district multipurpose hall in Bushenyi town” (Chris Ahimbisibwe and Abdulkarim Ssengendo – ‘Museveni warns Obugabe agitators’ 10.01.2010, New Vision).

President argument for not recognising:

Museveni: No, no, my friend, I am an administrator and I administer according to the law. So, if you do something which in my interpretation is wrong, I stop you. Then if you think I have stopped you wrongly, contrary to the law, you go to court.

And if the court declares you out of order?

Museveni: But I must govern the country. I can’t sit here and ask the court to govern. The court is not the one which administers. You see, I am the one who is administering and I administer according to the law. So, when I see you trying to do something which in my interpretation is not according to the law, I stop you. I may be wrong, but you can go to the court and you get the court to declare me wrong. In which case I will withdraw or if I still think what the court has done is not in public interest, then I go back to the legislature to get another law, so that the law expresses better the public will” (Joomlamsupport – ‘Museveni: I am the Ssabagabe of Uganda’ 26.10.2011, The Observer).

Blocked the Prince from a meeting:

“It has emerged that police in Mbarara recently blocked Ankole crown prince Charles Aryaija Rwebishengye Barigye, from attending a meeting called to discuss ways of furthering the cause for the restoration of the Obugabe (kingdom). The meeting was held at the offices of the Nkore Cultural Trust, Booma, in Mbarara municipality. NCT is a cultural organisation that has been at the forefront of agitating for the restoration of the Obugabe, the cultural institution of Ankole” (The Observer – ‘Obugabe Meet – Police Block Ankole Prince’ 21.07.2014).

“Responding to a question from a journalist about the fate of Ankole Kingdom during a press conference at his country home in Rwakitura, Kiruhura District yesterday, Mr Museveni said people in Ankole never yearned for the kingdom. After the restoration of Buganda, Tooro and Bunyoro kingdoms, there were attempts by Ankole monarchists to install Prince John Barigye (RIP) as king but his coronation, conducted secretly in November 1993 was later declared illegal by the government. Prince Barigye died in 2011. His son Prince Aryeija Rwebishengye, who is pursuing a master degree in Law in the United Kingdom, was installed as heir” (Daily Monitor – ‘I don’t oppose Obugabe restoration – Museveni’ 18.01.2016).

We can clearly see the games, the politicking and the postponement of it. It is all intentional. The small meetings and gatherings to resolve it. But somehow, it never happens or never tries. There is dismissals of actions made by the Kingdom, but no real intent from the government to tackle the issue either. Therefore, the picture is clear as day. The President wants to be the King, but doesn’t want anyone else to recognised. Because, that means his not prodigy, the one and only, the almighty leader of Nkore and he cannot be side-stepping with a traditional and cultural at his homestead. That is just the mere reality of this.

That is why he has accepted other kings and traditional chiefs elsewhere, because that is not his pride and glory. That is not directly his home, but Ankole or Nkore is. That is why his so negligent and distorting the thing. Even if we all know why.

Seemingly, the tale that fascinated him in the bush is so relevant today: “Not to allow the princes to disturb their peace again on account of power struggle”(retold by Museveni, 1993). It is that power-struggle of the Obugabe, whose hurting the pride of the Fountain of Honour, H.E. and the King of Kings. He feel belittled at home if he recognise someone else as King. That was his turf, his villages and his Kingdom to rule. Not let anyone else take the drums, the spears and shields. No, that is for him to have. Listen to the anthems, the tales of old and be royalty, which his entitled too.

That is how it seems. Not that its justified, but when a man has a hijacked a republic since 1986 and says his the only man with an vision. You know that he wants everything and wants the respect from everyone. That’s why this has hit a deadlock and doesn’t get resolved any time soon. Peace.

One thought on “Opinion: It’s easy to see why the Ssabagabe cannot recognize the Obugabe!”